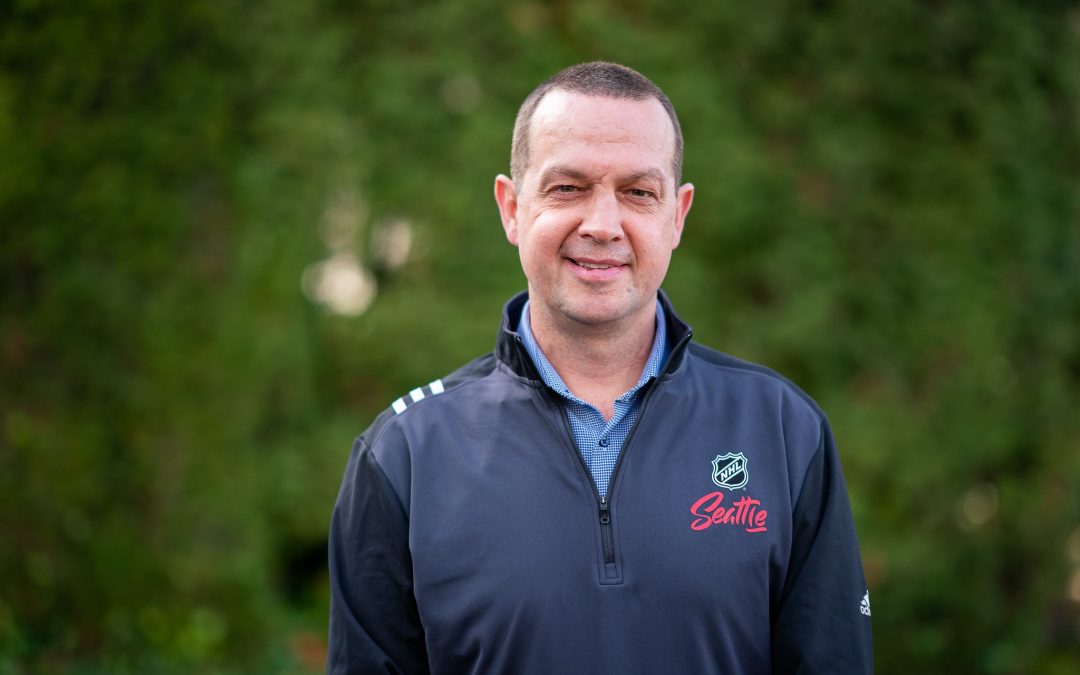 During his 16-year NHL career Stu Barnes played with many different teams. Monday, the NHL Seattle pro scout met his new team in person for the first time since joining the expansion franchise in September.

Barnes, along with the rest of the Seattle scouting group are in town to meet each other and go over preliminary scouting reports with General Manager Ron Francis, Assistant General Manager Ricky Olczyk, and Director of Hockey Administration Alexandra Mandrycky.

All five scouts will be appearing Tuesday night at the Pacific Science Center for a public forum to talk about the scouting process. Barnes will be on the stage along with Cammi Granato, Ulf Samuelsson, Dave Hunter, and John Goodwin.

“I knew Ronnie from playing with him in Pittsburgh and Ulfie I knew a little from playing against and mutual friends,” Barnes says about his new teammates. “Getting to meet the other guys has been great. I talked to Ricky a lot on the phone this fall. It’s a nice bunch of people and to see the office and the excitement, it’s awesome.”

His time with NHL Seattle has just begun but Barnes is not new to Seattle or the Northwest.

Barnes started his hockey journey across the border playing in the Western Hockey League with the New Westminster Bruins in 1987. He burst out with a strong rookie season by scoring 37 goals while piling up 101 points.

At the conclusion of that season, the Bruins packed up and relocated to Kennewick, giving berth to the Tri-City Americans.

“All of a sudden we’re moving to Tri-City and nobody really knew where that was,” Barnes says. “We went down in the summer for a preview on the Fourth of July and it was hot, it was like 105 degrees, and I’m from Edmonton.”

When the following season rolled around, the arena in Kennewick wasn’t ready so the team had to start on the road for the first 17 games.

The road start didn’t hurt Barnes’ game. He would score 59 goals that first year in Tri-City, along with an astonishing 82 assists as the Americans made the playoffs in their inaugural season.

“We were sold out every night,” Barnes says. “We had some good players. I think we had four guys who ended up playing significant time in the NHL.”

At the end of the season, Barnes was selected fourth overall in the 1989 NHL Draft by the Winnipeg Jets.

Before he embarked on his pro career he would return to Tri-City for one more season in 1989-1990 and turned in another monster campaign with 52 more goals, 91 assists and 144 points. He would make his NHL debut with the Jets in 1991 and go on to play 1,136 games with the Jets, Florida Panthers, Pittsburgh Penguins, Buffalo Sabres, and Dallas Stars.

His NHL career saw him play in the Stanley Cup Final with Florida and Buffalo and he was a teammate of Francis’ in Pittsburgh.

As Barnes left the Northwest his connection to the region didn’t end.

He met his wife during his time in Kennewick and maintained an off-season home there for many years, as did his Americans’ teammate Olaf Kolzig. In 2004, a chance to purchase an ownership stake in the Americans presented itself and the former teammates jumped at it.

The duo has owned the club since.

“We were lucky because we had such a good experience,” Barnes says. “When we got involved, we wanted our guys to have a great experience. Obviously you want to be successful with wins and all that kind of stuff, but in the end we wanted players to come into our organization and spend whatever amount of time they’re there, and when they move on say ‘what a great experience that was, I had a great time’. Hopefully they move on to play pro hockey or go on to use their scholarship.”

As a player in the WHL with New Westminster and Tri-City, Barnes would play many games in Seattle.

He played against the Thunderbirds in the old Mercer Arena as well as appearing under the iconic roof at what was the Seattle Coliseum.  He was on the visitor’s side but remembers the hockey scene in Seattle well.

“Great fans,” Barnes says. “I know my second year in the league they had a really good team. Glen Goodall was scoring at will, he was an automatic three, four points a night guy. What an atmosphere it was. It was always loud, and they cranked that Gary Glitter ‘Rock n Roll’ song. I heard that thing about eight times a night every time I came in here. It was fun.”

Barnes retired from the NHL as a player in 2008. His career ended with the Dallas Stars and he would go on to work for the Stars as an assistant coach and consultant.

When the opportunity to join NHL Seattle arose, it was an easy decision.

“Just the connection over the years with this part of the world,” he adds. “I have family in the area, in Tri-City, and always thought what a fantastic hockey town this is. I played here for three years against the Thunderbirds and love the city and this part of the country.”

Based out of Dallas, where he makes his home now, Barnes has been on the job since the start of the NHL season.

He and his fellow pro scouts have started the process to prepare NHL Seattle for the expansion draft in 2021. They are scouting current NHL players, gathering information and thoughts on who might be available and who looks to be the right type of player to bring on.

“Everybody wants, obviously, players that are high skilled and competitive,” Barnes says. “I think for now it’s about getting a good, strong base of knowledge about as many players as possible.”

Barnes has never worked full time as a scout before but as an assistant coach has experience in player evaluation. A big part of coaching is breaking down film on your players as well as pre scouting your opponents.

His experience behind the bench and on the ice as a player is a valuable asset but Barnes says that scouting has been a transition for him.

“It’s less stress,” Barnes says with a smile. “With the situation we’re in we are looking out a year and half from now. As a player and coach, I think everything is ‘right now’. You have to win now, score now, don’t make a mistake now. It’s different but it’s been a learning experience and I’ve really enjoyed it.”

As a player and owner in Tri-City, Barnes has had an impact on Northwest hockey for three decades. Now with NHL Seattle, his impact on the local hockey scene continues to grow as hockey grows in Seattle.