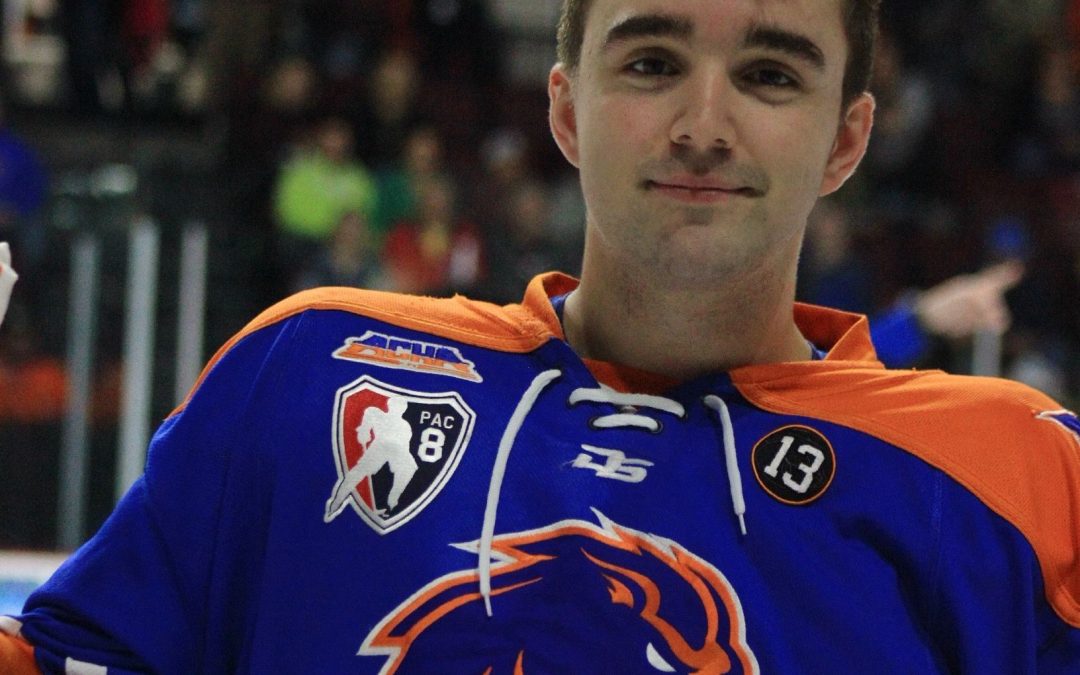 Bobby Skinner didn’t make every hockey team he tried out for and was cut on more than one occasion.

Those setbacks didn’t stop him from pushing forward, however. He would work on his game, improve his fitness, he would persevere. That dedication to the sport eventually paid off as the defenseman made the cut to play for the Seattle Jr. Totems where he would become captain during his second season. That self-belief and drive led to him to Boise State University after his Totems days, to play hockey for the Broncos.

Skinner was to turn 23-years-old this past Friday but tragically he lost his life in August of last year, the victim of an accidental gun shot.

The loss of a child is every parent’s worst nightmare and Skinner’s mother and father, Tricia and Bob Skinner, want to honor their only son’s legacy by giving back to the local Seattle hockey community that Bobby loved so much. The Bobby Skinner Memorial Fund has been created in his memory to provide assistance for kids and families to have easier access to hockey.

“We wanted to do something good out of what happened with this tragedy,” Tricia Skinner says. “Bobby loved hockey, he loved helping people. I kind of came up with the hockey for all idea. Especially for minorities who can’t afford it and kids with single parents who have trouble getting there and costs.

“I want it to be a community, build more of a community and make it more accessible. Make it a fun sport, kind of like soccer. Maybe, make it an after school hockey program so we could pick up kids from school on a bus.”

Thanks to a family connection the fund’s initial gift, and ongoing support, is coming from the Ackerley Foundation.

Christopher and Ted Ackerely are part of the investment and ownership group of NHL Seattle but the desire to be a part of the Bobby Skinner Memorial Fund was inspired by Bobby’s story and journey.

“I think the thing that really struck me was his being so young,” Ted Ackerley says. “I knew he was a hockey player and how well loved he was by his teammates. I didn’t know him personally, but I know that he was having a big impact in Boise.”

Prior to playing at Boise State, Bobby Skinner played for the Seattle Jr. Totems. (Skinner family)

The Fund will start with a balance of $100,000 with the Ackerley’s gifting $25,000 initially. The remaining funds will come from a number of contributors. The hope is that through the initial funding and public donations, it can become a long-standing program to give back to the local community.

A board will be established and planning for initiatives and proposals are still in their early stages.

“To have the opportunity to launch something that comes from such a heartfelt place with the tragic events I think will resonate with people,” Ackerley says. “We’re excited to be part of something that will come from a good place. We think families and kids from across the region will want to support and I think ultimately over the next 10, 20 years people will look back to this spot and say that was a real catalyst to make hockey more accessible and affordable to a lot of kids who otherwise wouldn’t have the opportunity to.”

Helping others and giving back to the community are all traits that describe Bobby Skinner and how he lived his short life.

Born in New Jersey, Skinner got into hockey thanks to his father, Bob, who initially was looking for an outlet for his son’s pent up energy. The family would move to Seattle in 2002 and Skinner would go on to play for both Seattle Junior and SnoKing.

He would eventually move to Idaho and play for the Compete Hockey Academy before playing for the Wenatchee Wolves prior to landing with the Totems.

After Skinner’s death, an outpouring of grief and love flowed from the hockey Community. The Idaho Steelheads of the ECHL honored him before an early season game and created a Bobby Skinner Youth Hockey Foundation to fund Idaho youth hockey.

Skinner’s teammates also expressed their grief. Listening and hearing how they describe him, you can understand how he was selected captain with the Totems.

One teammate, Sam Hauser, not only played alongside Skinner, but also billeted with the Skinner family. Hauser penned a heartfelt letter to his lost mate after Skinner’s passing.

“There wasn’t a person that you didn’t strive to make happy,” Hauser wrote. “It was the quality I have always admired most about you. Your never-ending desire to make others feel loved and wanted is something that I didn’t know existed until I met you. Whether it was going to hangout with someone that was having a tough day or showing a new teammate around Seattle, you never felt you were too important to give your time and energy to others.”

Skinner not only loved hockey but he was driven to explore life.

He saved up money by working in the off season to travel to Thailand. He studied Muay Thai kick-boxing and dreamed of opening up a taco stand while there.

“He would have done it, too,” Tricia Skinner says.

Skinner’s death is a loss to not only his family and friends but to the Northwest hockey scene as well.

The creation of a memorial fund in his name will be able to give back to the sport that gave him so much. It cements his legacy and honors him by holding the same attributes and characteristics that he did. The hockey community is close-nit and this initiative will help it grow as well as help the Skinners with the loss of their son.

“For me to jump into something like this, it will help me move forward.” Tricia Skinner says. “I can’t even explain the gratitude we have.”

Donations can be made online as well as directly via check sent to the Bobby Skinner Memorial Fund at PO Box 1773 – Woodinville, WA 98072.