Debugging the EBUG – The David Ayres story is inspiring, but this system is ridiculous 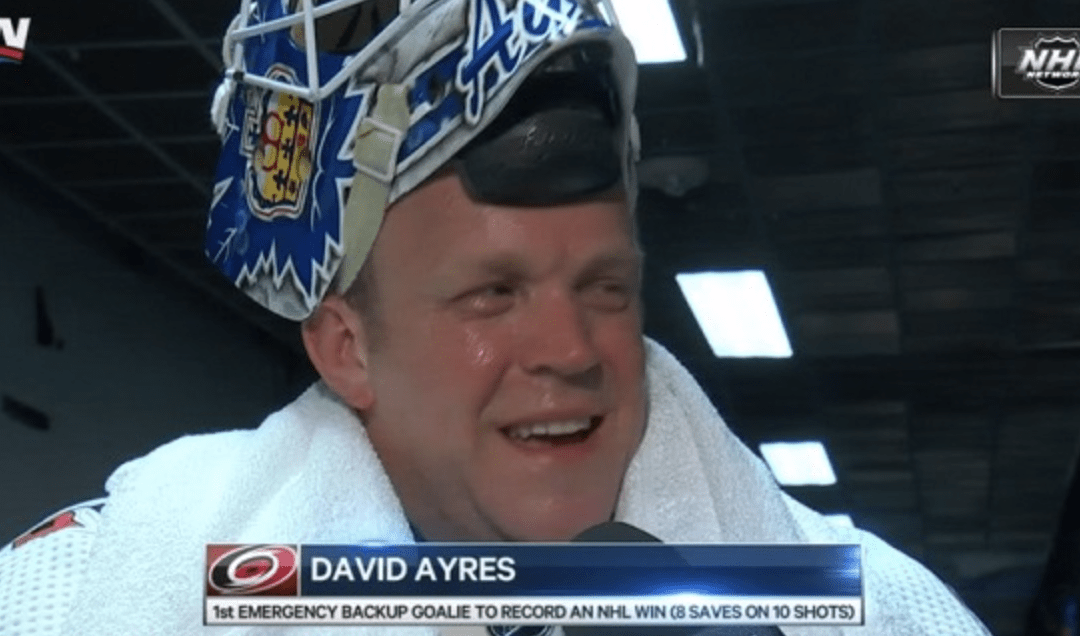 There exists a real-world scenario, and it’s not even all that farfetched, in which I could suit up and tend goal in an actual points-on-the-line game for your NHL Seattle franchise in 2021 and beyond.

Anyone who has seen me play goalie as an adult would likely agree that this not-so-farfetched notion is actually a huge problem. I’m a beer leaguer, and a mediocre one at that. With unimpressive Greater Seattle Hockey League stats, a bit of a belly (I’m working on it! Lay off me!), a ripped and unzippable Cooper hockey bag constructed circa 1994, and a mask that I had painted with my hometown’s colors when I was a peewee, I have no business ever being considered an option to suit up even to practice with an NHL team, let alone enter an actual game with playoff implications. Put another way, you do not want me playing for your soon-to-be-beloved Crapweasels (or whatever NHL Seattle names itself, though Crapweasels is the obvious choice).

And yet… it’s possible. That’s ridiculous.

What transpired in Saturday night’s game at Scotiabank Arena in Toronto between the Maple Leafs and the Carolina Hurricanes was one of the most shocking and awe-inspiring things I’ve ever witnessed in an NHL hockey game. James Reimer went down with a leg injury in the opening minutes of the game after Jaccob Slavin fell on him in the goal crease. It happens. It’s a contact sport, played at extremely high speeds, and guys get hurt sometimes. Reimer’s replacement, Petr Mrazek, came out to play a puck in the second period and got absolutely trucked by Jake Muzzin, sending Mrazek to the quiet room and removing him from the game. Again, it’s unfortunate, but it happens.

Chances of both goalies having to leave a game are slim, but… it’s hockey… it happens.

For these situations, every NHL team is required to have an EBUG (emergency back-up goalie) in attendance for each home game, and that EBUG serves the role for both teams playing on that given night. The people who perform this typically thankless task do not get paid for their services of showing up to a significant number of the home team’s games (there are normally two or three individuals who share the EBUG duties), but they do get to sit in the press box and attend NHL games for free, which I guess is kind of cool.

Maybe the NHL has it right by allowing teams to have a beer league goalie serve this position. After all, spending any amount of payroll on a player that will most likely never play is a little crazy, right?

But then a game transpires in the way that Saturday’s game did.

The EBUG that night was David Ayres, a 42-year-old ice arena maintenance man/Zamboni driver and kidney transplant survivor, who so happens to be a diehard Leafs fan. When Mrazek went down, Ayres got the unthinkable text to get in the game, so several minutes later, out he came onto the Scotiabank Arena ice, sporting a Toronto Marlies mask, coordinated blue and white gear, and… a white jersey that said “Canes” diagonally across the chest. It’s been widely reported that Ayres was even wearing a Leafs t-shirt under his equipment when he first entered the game, but was later implored by his temporary team to swap that out for a Hurricanes shirt.

Ayres ended up playing almost half the game against his favorite team, making eight of ten saves to become the first emergency goalie to officially get credited with a win, and was named the first star of the game. He also made history as the oldest goaltender to win his NHL debut. Now the Hurricanes are selling his shirsey, and he’s making royalties off of it and working with the team to donate proceeds to a kidney foundation.

“Ayres will receive royalties for the shirt and a portion of the proceeds will go to a kidney foundation.” https://t.co/wNmkWZGH9K

I mean, it’s all pretty incredible, and you’d be hard-pressed to find a better sports story in recent memory.

As I was watching it, though—and don’t get me wrong here, I loved every moment of it—I couldn’t help thinking, Isn’t there anybody more qualified that they can get for this? This is awesome and all, and I’m really happy for this guy, but Jesus, this is in Toronto! Wouldn’t quality emergency goalies grow on trees in Toronto?

Brian Burke brashly agreed with my sentiments on his Sportsnet “To The Point” segment, although his proposed solution of the NHL setting quality standards for EBUG’s, but not really changing the system, is a bit flawed.

"Miracle on ice all over again." pic.twitter.com/e8KuEQHllg

The issue with Burke’s plan is that in markets where hockey still isn’t all that mainstream, how are they going to find high-level goalies that will just hang around all the time without getting even reasonably compensated? I also don’t think this event was “embarrassing” for the NHL, as Burke called it, but I do think it’s something that needs to be addressed. After all, this is the second time in three years that the emergency goalie has been thrust into NHL action, with then 36-year-old accountant, Scott Foster, the unexpected savior for the Blackhawks in 2018.

Both EBUG situations were great stories with great endings, but what the hell? This is the best hockey league in the world, and in any other major sports league that makes billions in revenue, when was the last time you heard of an accountant or maintenance worker subbing into an actual game?

My argument is a bit more aggressive than Burke’s, in that the emergency goalie should be more like a third-stringer that is paid by each individual team, travels with that team, and fills in in practices as needed. My vision for the EBUG is akin to the bullpen catcher in baseball, somebody who played at a high level, but realized at some point that he or she wasn’t going to make it and no longer has the drive to make it to the highest echelons of the sport. Give that netminder a $30K salary for the six-month regular season, and maybe a $5,000 bonus per month, should the team progress through postseason rounds. In exchange, get a full-season commitment from that goalie to do whatever the team needs.

This version of the EBUG would not require teams to use a roster spot for a third goalie or even count it as an NHL or AHL contract, yet each club would have a vested interest to find the right fit for the position. I believe quality goalies would flock to NHL cities for the opportunity to join a team in this capacity, even for that small of a salary. In turn, it would give each team a netminder who actually can play in a pinch and doesn’t completely shock the sports world by being called upon.

Or, we can just continue with this current setup, and perhaps you’ll see me in the goalcrease for the Crapweasels in a couple years.