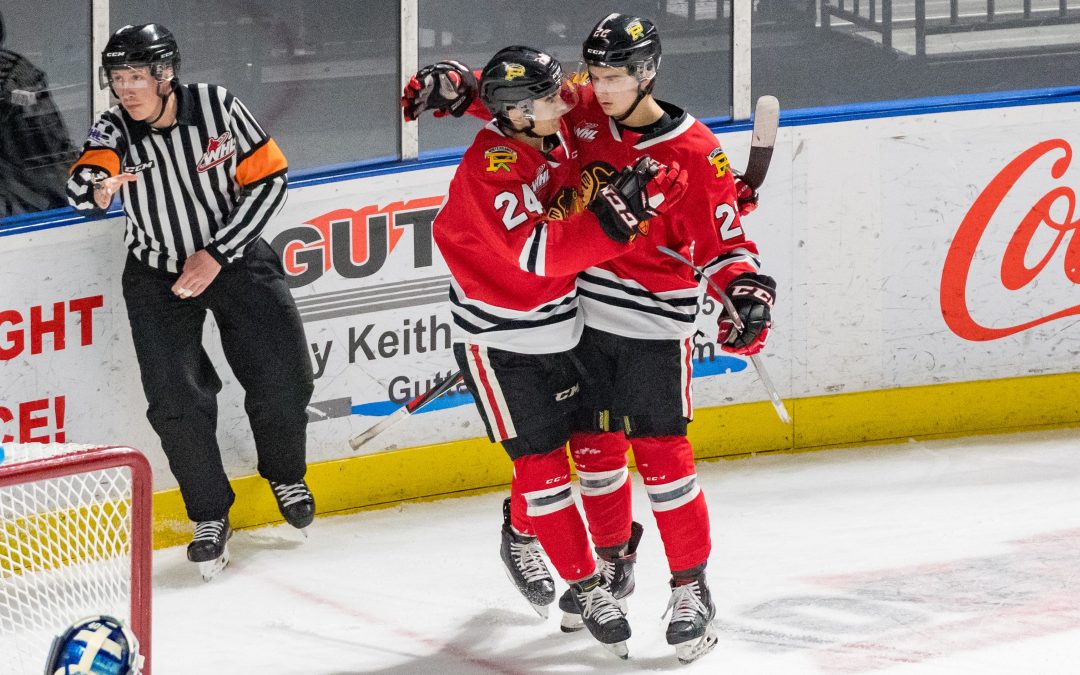 For the first time in its 102-year history there will be no Memorial Cup handed out this May.

Due to concerns surrounding the COVID-19 disease the Canadian Hockey League canceled the playoffs for all three member leagues. This of course, meant that the Western Hockey League season was over and for the five teams in the U.S. Division, a lost chance at a playoff run.

Four of the five teams in the division qualified for a playoff spot and the top three teams were contenders to win the whole thing. We’ll never know what would have happened but we do know what did happen.

Here’s a quick look back at the season that was for the U.S. Division clubs.

Coming into the season, the Winterhawks collection of young talent appeared to be one that would lead them to be a contending team in the next year or two. As it turned out, that future came this season.

Portland ended up with the top spot in the U.S. Division and the entire league to collect the Scotty Munro Trophy. The Winterhawks season was punctuated by a 21-game point streak from November into January. That streak vaulted them into the top spot of the division and they stayed in the race until the end.

Their 270 goals scored was the most in the division and they trailed only Kamloops for the most in the Western Conference. Buoyed by 62 points on the back end from Johnny Ludwig (Florida) the Winterhawks were led in scoring by 2020 draft eligible Seth Jarvis.

Jarvis, 17, came into the season as a solid NHL prospect but after exploding for 42 goals, 56 assists, and 98 points – good for second in the league’s scoring race – he ended the season as a first-round draft prospect. Loaded with speed and a top-end finishing touch, Jarvis’ ceiling looks to be pretty high.

In goal, Joel Hofer (St. Louis) had the best season of his career, ending with a .915 save percentage and winning 34 games. He was especially good in the first half of the season which earned him a spot on Canada’s World Junior team where he would become the starter, winning gold for his home country.

How would they have fared in the playoffs? After the big win streak, the Winterhawks came back to earth a bit, allowing Everett to pull even, and ahead at times, in the division race. They ended the season with Ludwig and Reece Newkirk (New York Islanders) on the injured list but if they came back and Hofer returned to his first half form, the Winterhawks had as strong a claim as any to win the league.

Breakout player – After a rookie season where he picked up 29 points, Jaydon Dureau burst out with 70 this year. That was good for second on the team and he proved to be quite the playmaker by picking up 51 assists in 61 games this year.

Everett lost out on the U.S. Division title by one point despite winning one more game than Portland did. The Silvertips were as good as any in the WHL this year, winning consistently from start to finish.

When talking Silvertips, everything starts in net with Dustin Wolf (Calgary). The goalie led the league – by quite a margin – in goals-against average (1.88) and save-percentage (.935) and should be named goalie of the year. He made the cut for Team USA at the World Juniors this winter where he backed up Spencer Knight.

The Silvertips had big performances in front of Wolf from defensemen Wyatte Wylie (Philadelphia) and Jake Christiansen. After starting the year playing in the AHL with Stockton, Christiansen, 20, was returned and exploded for 22 goals and 50 points in just 38 games which earned him a contract with the Columbus Blue Jackets. The Wylie-Christiansen combo on the power play powered the Silvertips to the top of the man advantage charts during the regular season.

Up front the Silvertips got another big year from over-ager Bryce Kindopp (Anaheim) who potted 40 goals and ended up 12th in the league scoring race with 74 points – tied with linemate Cole Fonstad (Washington).

How would they have fared in the playoffs? Everett would have to be

considered one of the top favorites in the post season. The strength of their roster was the backend with Wolf and company – they allowed a league low 142 goals – but had the firepower up front. The Silvertips were poised for a long run.

Breakout player – Gage Goncalves burst out for a 33-goal, 71-point season this year after just finding the back of the net once in 67 games as a 17-year-old rookie last season. Playing at times with Fonstad and Kindopp, Goncalves helped give Everett one of the league’s best lines.

With a new championship winning coach in Manny Viveiros and a highly talented roster, the Chiefs looked like front runners before the season began. They had some set backs as they lost a scorer in Jake McGrew (San Jose) after six games and had some goalie injuries to deal with as well.

As the season wore on however, the Chiefs found their footing and ended the year as the hottest team in the league, winning their last 10 contests. Lukas Parik (Los Angeles) took over in goal to give Spokane stability in net – and even ended the year by scoring a goal.

Adam Beckman (Minnesota) had a spectacular season to lead the WHL in scoring. He scored 48 times and ended as the only player in the WHL to top the 100-point mark with 107.

It wasn’t clear if they would get another season out of New Jersey Devils first-rounder Ty Smith but the defenseman was returned and played as expected. Scoring a career-high 19 times, Smith was as electric as ever and got the Chiefs offense started. He ended up with 59 points in 46 games, having missed time playing, and winning gold, with Canada at the World Juniors.

How would they have fared in the playoffs? One of the intriguing aspects of the Portland-Everett battle at the top of the division was which one of those teams would get to avoid Spokane in the first round. Nobody wanted to play the hottest team in the league right out of the gates. The Chiefs could score and Parik was providing the goaltending in the back end. The Chiefs had a shot at making the run.

Breakout player – Hailing from nearby Post Falls, Idaho, rookie Bear Hughes came on strong for the Chiefs. Hughes, 17, scored 16 goals in his first WHL campaign which included five on the power play. Hughes could be a guy who turns into a top-end scorer in the WHL and is someone to watch moving forward.

Thunderbirds general manager Bil La Forge made it clear this would be a rebuild year for Seattle when he made a big trade in May that included forward Dillon Hamaliuk (San Jose). He got back a slew of draft picks, including two first-round selections from the Kelowna Rockets.

That meant that Seattle was going to be young and inexperienced. The Thunderbirds regularly deployed six rookies for big minutes, four of which were 16-year-old. That led to some tough nights but Seattle still managed to get itself into playoff position despite a tough schedule that pitted the Thunderbirds against Portland, Everett, and Spokane a total of 26 times.

Seattle’s Conner Roulette had a stellar rookie season for the Thunderbirds. (Brian Liesse)

Many of Seattle’s rookies were impressive but none was more noticeable than Conner Roulette. A second-round pick in 2018, Roulette, 16, played on Seattle’s top line for most of the year and scored 19 goals. He had a chance to be the first 16-year-old to score 20 times for Seattle since Patrick Marleau but the season’s cancellation put an end to that.

Henrik Rybinski (Florida) was Seattle’s best player but the team overall struggled to score goals on a regular basis. On the blue line Simon Kubicek and Tyrel Bauer had solid seasons and stand a good chance to be selected in the 2020 NHL Draft.

How would they have fared in the playoffs? Getting to the playoffs was the key for the Thunderbirds this year. With the roster they had, making it felt like a long shot at the start of the year. While they most likely would not have advanced past Portland or Everett in the first round – although they did scrape out some wins against the two in the regular season – the experience gained would have been the Thunderbirds biggest victory.

Breakout player – It’s hard to miss center Matthew Rempe when he’s on the ice. The 17-year-old rookie stands at 6-foot-8 and he can skate. He missed the first part of the season with injury but ended up with 31 points and 12 goals in 47 games. The NHL loves tall centers with skill who play physical as Rempe does so it won’t come a shock if he gets a look at the next level.

It was a tough second-half of the season for the Americans who began a rebuild by trading away veteran players. The Americans took their lumps in the second half, getting blown out most nights, but they have an eye towards the future as general manager Bob Tory picked up draft assets along the way.

Early on goalie Beck Warm was outstanding for Tri-City, keeping the team in games and in a hunt for the playoffs. But as the season wore on it was clear that it would be a tough task for the Americans and Warm was sent to Edmonton, where his goals-against average dropped over a goal.

Sasha Mutala (Colorado) continued to be a bright spot for the Americans and he led the team in goals (28), assists (39), and points (67). He was Tri-City’s best player and the next closest to him in the scoring race was Conner Bouchard with 44 points.

Sasha Mutala had a strong season for the struggling Tri-City Americans. (Brian Liesse)

Looking ahead, the Americans missed out on the top spot in April’s Bantam Draft but did end up with the fourth overall pick. The 2020 Draft class is purported to be one of the best in recent memory and that’s the good news for Tri-City as the team has 12 picks to try and restock the pipeline.

Breakout player – An older rookie, Edge Lambert, built off a strong year last season in the AMHL and scored 17 goals for the Americans. Originally a draft pick of the Prince George Cougars, the 18-year-old will look to duplicate that next season and help give what should be a young team some veteran experience.