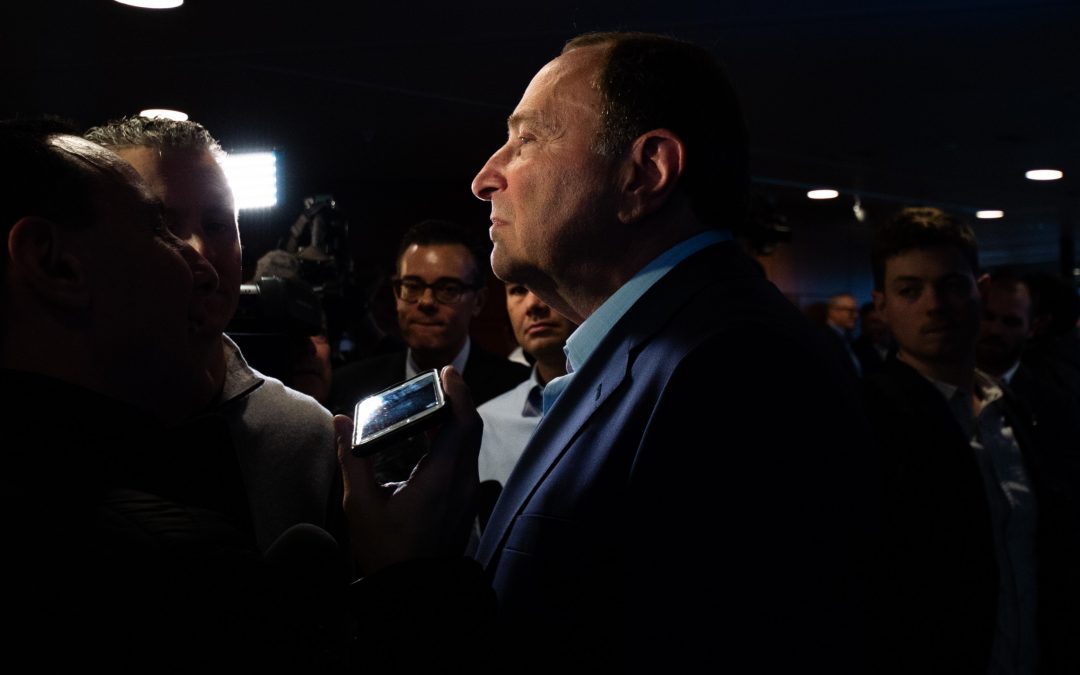 NHL commissioner Gary Bettman detailed the league’s Return To Play plan Tuesday that includes a 24-team playoff format which would allow the NHL to conduct a post season after pausing their regular season in March due to the COVID-19 disease.

His live streamed announcement came a couple of days after the NHLPA approved the plan over this past weekend.

“We are hopeful the Return To Play Plan will allow us to complete the season and award the Stanley Cup in a manner in which the health and safety of our players, on-ice officials, team staff and associated individuals involved are paramount,” Bettman said. “Accordingly, an essential component of the Plan is a rigorous, regular schedule of testing.”

In the plan, the regular season is considered finished and the top 24 teams based on their point percentage will participate in the post season. There will be an initial qualifying round made up of best-of-five series played between the bottom eight teams in each conference to determine who will make up the playoff brackets. The top four teams in each conference are automatically in the playoffs and will play a round robin tournament among themselves to determine their seeding.

The eight teams who win their qualifying series will advance into the first round of the playoffs.

Games will be played without fans and in two hub cities that have yet to be determined. One city will be in the west and one in the east and teams will be allowed to send a maximum of 50 team staff to the hubs.

In the Eastern Conference qualifying round, Pittsburgh will play Montreal, Carolina will play the New York Rangers, the New York Islanders will play Florida, and Toronto will play Columbus.

Despite the announcement, there are still a number of questions to be answered.

Bettman said that they are not setting any start dates because the timing will still be determined by medical and civic officials as to when it is safe for teams to congregate. They are hoping that the clubs could get together for a training camp sometime in the first half of July.

“I think its conceivable we’re playing at the end of July or the beginning of August and will play into September,” Bettman said “If it has to slide it will slide.”

A late start will obviously impact the start of next season but Bettman said that the league is positive that the 2020-2021 season will be played in its entirety even if they have to start as late as January.

The first step to returning is what Bettman is calling ‘Phase 2’, which is allowing players to begin training in small groups at their team facilities, and could start in early June.

Players will be travelling from Europe and across the Canadian-U.S. border. Currently, the United States border is closed and Canada is requiring a 14-day self quarantine for anyone who is allowed to cross its border.

“We have been dealing with the governments in both the United States and Canada,” NHL Deputy Commissioner Bill Daly said Tuesday. “The acting Director of Homeland security,  in the last three days, signed an order that made professional athletes essential personnel which allows them to travel in the U.S.

“The one issue that we continue to work actively on is the mandatory federal quarantine that is in place for all people who travel into Canada. We are having various discussions with various people in the Canadian government.”

Daly added that if that restriction can’t be lifted it will take Canadian cities out of the running to be host cities.

While the qualifying rounds will be best-of-five series the league has yet to determine the length of the first and second-round playoff series. The Commissioner did indicate that the conference finals and Stanley Cup Final would be a best-of-seven.

The NHL’s Draft lottery will be held on June 26th and Bettman correctly described the process as “a bit complicated.”

Using three to six drawings over one or two phases, the lottery will determine the first 15 picks of the 2020 draft. Bettman wasn’t kidding about it being complicated.

The seven teams that failed to make the post season will be eligible for the lottery as will the eight teams that lose in the opening qualifying round. The first drawing in phase one will include eight placeholder spots since the losing teams in the qualifying round won’t be known.

Phase one will determine the first three picks in the draft with a drawing for each slot. If one of the place holder spots wins one of the top three slots a second phase will be required, consisting of all eight eliminated teams to determine which team wins that spot.

Those teams have a less than six-percent odds of winning the top spot so the chances of a team in the qualifying round winning the top pick are slim. But, they do have a shot.

Detroit has the best odds at getting the top spot with an 18.5% chance while the Ottawa Senators are second with 13.5%.

Testing players and team personnel will obviously be a major focus on any return to play scenario. Bettman felt that they would be able to provide an adequate number tests for each team that would not impact the public’s ability to be tested. Daly added that one positive test shouldn’t require the league to stop but also said that the league couldn’t have an outbreak.

This situation is far from a done deal.

As the COVID-19 situation is constantly changing, the league, and the NHLPA will continue to monitor and update their plan as time moves on.

Despite that unknown, we do appear to be one step closer to seeing NHL hockey again.