Why you should love Climate Pledge Arena 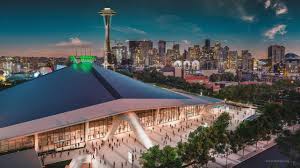 That dastardly Jeff Bezos has done it again! The eccentric gazillionaire CEO of Amazon let the cat out of the bag Thursday that his company had bought the naming rights to the former Key Arena, and would be re-naming the future home of the NHL Seattle franchise Climate Pledge Arena.

True story, my wife read the news to me while we were in the car, and my real-time reaction was that she was reading fake news and had been duped. “That’s the stupidest name ever!” I probably exclaimed. But then she shared the whole context of the name—that the building would have zero waste at events, electric Zambonis, ice made from recycled rain water, and a whole host of other green initiatives—and my mind was immediately changed.

Rendering of a concourse at the future Climate Pledge Arena.

I loved it. I still love it. Climate. Pledge. Arena. As in, “I’m an arena that pledges to be the most climate friendly of all the arenas, and if you aren’t climate friendly, then please at least keep your single-use plastics the f*** out of here.”

Sure, NHL Seattle, Oak View Group, and Amazon could have come up with something that slides off the tongue with a little more zest, but frankly, they also could have called it Jeff Bezos Prime Rink at Amazon Arena, Powered by AWS. And you know something? With the likes of AWS CEO, Andy Jassy, among the minority owners of the team, and the headquarters of one of the world’s largest companies next door, a terrible corporate name like that would have been completely feasible and downright warranted.

But they didn’t do that. Instead, Amazon still invested the (likely) hundreds of millions of dollars to earn the rights, but rather than sticking its own name on the façade, decided to make the glowing signs atop the historic preserved roof serve as a daily reminder to Seattleites and visitors from around the globe (well, if the pandemic ever ends) that our city, which gets its lifeblood from the natural beauty that envelops it, is a leader in the fight against climate change.

It’s a beautifully progressive approach to something that has been the same for decades. Yet, many of the folks on Twitter have poopooed this progressive thinking.

I'm all for fighting climate change, but this is the dumbest f**king name ever. I'd be happier with 'Sticky Dick Arena'. https://t.co/65gPwYEi3c

And for those saying that Jeff Bezos is the richest man in the world, and he could just spend the money to fight climate change, well… yes… he certainly could. But why would he give the pocket change that it cost him to buy the naming rights to this arena, when he can instead pledge $10 billion? Yes, Amazon has certainly contributed to the climate crisis, but so have you, and with all due respect, how much money have you pledged?

Anyway, since everyone seems to be so upset that an organization would do something so ridiculous as focus the naming rights of an arena on something as silly as climate change, perhaps you would have preferred that they call it something a little more straight forward and corporate, like one of the following perfectly named and less controversial venues from across the United States:

Or, my personal favorite:

You’re right, something like those more traditional venue names would have been way better than naming the arena after something that draws attention to the environment. Oh, and by the way, of the seven Canadian NHL arenas, two have the word “Rogers” in the name (not to be confused with Rogers Centre, the home of the Toronto Blue Jays), two have “Bell,” two have “Scotiabank,” and the last one is called Canadian Tire Centre, but was previously called… yep, you guessed it… Scotiabank Place.

Watch the below video from NHL Seattle’s press release to learn more about Climate Pledge Arena and its green initiatives.