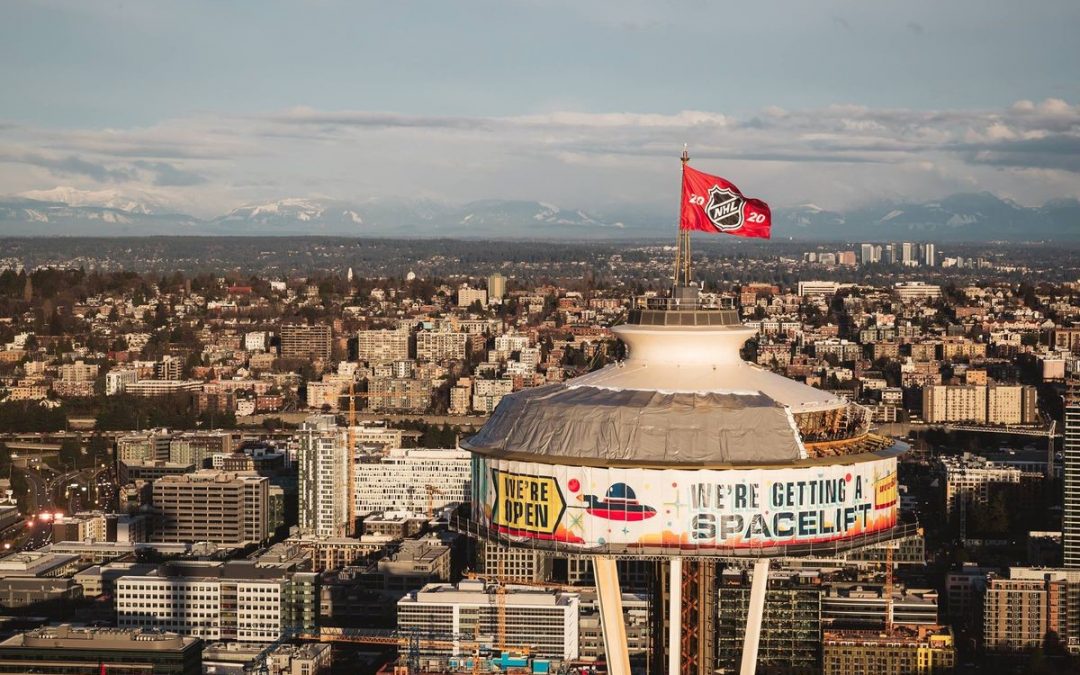 I don’t fit the bill for your average hockey fan. I’m a liberal arts graduate who spends most of my time re-watching Sherlock and reading YA novels. I didn’t like hockey, despite growing up in Minnesota, until a few years ago. With a job at a non-profit, I can’t afford an NHL Network subscription, let along tickets to a live game more than once a year.  But I have become completely overwhelmed with excitement over the new Seattle NHL team.

When it was announced, it felt like my team – one I could really get behind.  It was in a place I was excited to be moving to and didn’t have the baggage that other teams have.  I also love the Wild, but with years of history baked into the franchise that I didn’t know about, it felt hard to call myself a fan. The Seattle team would be a fresh start and my true entry-point into a sport I was beginning to love. Planning would be ramping up just was I arrived in town, so the timing of it was perfect. (Am I a little annoyed to have lived in Seattle for almost two years with no team yet? Yes.)

Then the name debate started. I quickly realized that there were some names I and my other female friends who love the sport wouldn’t touch with a 10-foot pole. Female hockey fans have had to learn how to be discerning. We’ve carved out a place for ourselves in a league that has never made us feel welcome. We name favorite players hoping they won’t be revealed to be misogynistic messes. And while this new NHL franchise feels like a fresh start, the choice of a name could throw it all over the precipice.

Ahead of the much anticipated and much delayed name announcement, here is my definitive ranking of possible names. (These are the 15 names that have registered trademarks in place.)

Let’s start with the name that will make me erase this team from history: 15 – Totems – As well as having a misogynism problem, it’s no surprise that hockey has a racism problem. Recently, when a private group chat that (now former) player Brendan Lepsic was a part of was leaked, the NHL took the basic step of condemning his language and actually calling it misogyny, while also ignoring the racist language used in those messages. Players of color are taunted on ice, both by fans and other players. This attitude makes even die-hard fans reticent to introduce new people to a sport that feels unable to treat BIPOC with respect.

The Totems, being the minor league team in Seattle from 1958 – 1975, was one of the first names that got floated around for this hockey revival. The history of this team does not justify choosing a name that will be used derogatorily towards Indigenous people. Diehard fans of sports teams such as the R*dskins or the Blackhawks like to believe their names show respect to Indigenous people, while at the same time engaging in racist caricatures at games. Choosing the name Totems would give fans an implicit excuse to show their hidden (or not hidden) racist thoughts. Though I am hopeful this name will not be chosen, I know if it was there would be protests and I would be outside with them, not spending money on the team.

14 – Metropolitans – I know there’s history to this name, being the first team from the US to win the Stanley Cup, but let’s be truthful – it’s boring. Seattle is not so metropolitan compared to other cities in the league.   I would fall asleep at a Metropolitan s game.

(I would leave it at that, but there are also like 100 other teams called the Eagles, so let’s not.)

12 – Whales – While not a terrible name, and actually relevant to our area, the closeness of the Canucks and the history of the old Hartford Whalers NHL team make this a perplexing name choice.

11 – Emeralds – Seattle may be known as the Emerald City, but to me using a precious gem stone as a team name turns me off. Hockey is not a sport easily accessible for the proletariat. I already mentioned that as a fan I barely get to watch games (with the exception of my darling MN Whitecaps, which stream their games for free) and if you want to play hockey, there’s an extreme money mountain you need to overcome for gear and travel. I wouldn’t be disappointed if this was the name, but nor would I be filled with joy.

With the reveal of Amazon’s Climate Pledge Arena, which heavily features green-washing, the Emeralds gains a point for increased likelihood of being chosen.

10 – Seals – This name moved up and down a few times, before settling here. There is nothing wrong with it. Seals are lovely creatures. It simply doesn’t excite me. It doesn’t have the fierceness I’d want for a hockey team.

9 – Firebirds – I actually love this name a lot. It has a juxtaposition that delights me – a creature of fire & flight skating around on ice. The pitfall comes from its lack of connection to Seattle. Nothing about it makes me think of this town. When trying to find a connection, I discovered that the firebird is a figure from Slavic folklore. While King County’s population comes from all around the world, it’s not known for having Slavic immigrants.  I’d rather this name go to a city that can do it justice.

8 – Cougars – Another perfectly wonderful name. I had this up higher on my list until someone reminded me that we already have the Washington State Cougars. Let’s not overcrowd it.

Now on to the good names!

7 – Rainiers – Oh mighty Rainier, it’s always a good day when we can see you in the distance. I’m not a super fan of this name for two reasons. First, the beer. I think there might be a few copyright issues that come up. Second, the history. Mt Rainier’s original name is Tahoma. Rainier comes from Rear Admiral Peter Rainier, the friend of a white explorer. I don’t think we need to add this accolade to his name.

6 – Steelheads – This name fills my two major criteria, connection to Seattle and fierceness. I would love to see an old man on the river as a mascot. More than simply the fish, this name is connected to the sports history of Seattle – there was a West Coast Negro Leagues baseball team called the Seattle Steelheads. If this name was chosen, it would be wonderful to acknowledge this history, perhaps with an exhibit in the arena or inviting the families of former players to games. Unfortunately, this could also be a huge misstep if the previous history of the name is ignored. Its main downfall though comes from how little it excites the community.  Most people aren’t overjoyed with a fish taking the center stage.

5 – Sea Lions – I think this could be a really fun name. Sea lions are both playful and strong. It can highlight our connection to the water and I can already see a personality video of players meeting sea lions. One small negative on this could be logo design – a large grey mass isn’t the most interesting to look at.

4 – Sockeyes – Similar to the Steelheads, this is a pretty good name, with an unfortunate fish tie-in. I like it a bit better, because of the pun, but I can almost guarantee it will not be chosen. Romance Novelist Jami Davenport has a series of books on the love lives of the fictional Seattle Sockeyes hockey team and she is unwilling to give up her trademark. You go girl.

3 – Renegades – When I polled my friends on this name idea, I was the only one to have Renegades this high, but I’m keeping it there because it’s my list.  I love the idea of going against the system. I believe it could easily tie into the Seattle punk and grunge scenes and I would be excited to support a team with this name.  I will add that with the team’s new tie to Amazon, this contain a bit more irony than I can handle.

2 – Evergreens – In case you couldn’t tell by this list, I consider myself a bit of a hippie. I love the idea of our team being trees. Evergreens tops the list of names that tie in with Amazon’s Climate Pledge Arena, which does put a sour taste in my mouth. To be clear, I am overjoyed by the construction of a carbon neutral arena, no fracked “natural” gas, and all of the other wonderful environmental features that are planned.  Maybe there could be environmental tie-ins at events, including volunteering opportunities? But the fact of the matter is that this whole thing is a goodwill-buying PR grab by Bezos, whose company is one of the biggest contributors to the climate crisis. Amazon has fired organizers who want to hold the company accountable to the climate crisis and Amazon’s emissions continue to grow despite claiming they will be reduced.  Bezos may believe naming the stadium Climate Pledge Arena will get concerned people off his back, but he couldn’t be more wrong.

My extreme emotions about Amazon aside, I still love the name Evergreens. I don’t think the team could go with a tree for the mascot, but I would hope they don’t choose a lumber jack either. I would hope for a forest ranger, or, if they really want to go wild, a hermit.

1 – Kraken – You knew it was coming. Say it with me, “Release the Kraken!” How can you pass up this line? If there’s any name that can secure a young fan base, it’s this one. I know the odds are against its selection, but I’ve already promised myself I would be buying Seattle Kraken merch, no matter the official name.

Late breaking edition, I have heard a rumor that Kraken is the official name. But it came from someone who thought Kraken had to do with crabs, so it’s not entirely reliable.

If I had to choose which name I actually think will be picked, I will be placing a very loose bet on the Evergreens or the Steelheads. I don’t have an insight on what the Powers that Be will choose, but I have to hope it’ll be exciting. This team could be a chance to listen to hockey’s wide array of fans, instead of playing it safe with the old (white) standards. I’m looking forward to an announcement, whenever it comes.

Alright, let’s do that hockey.