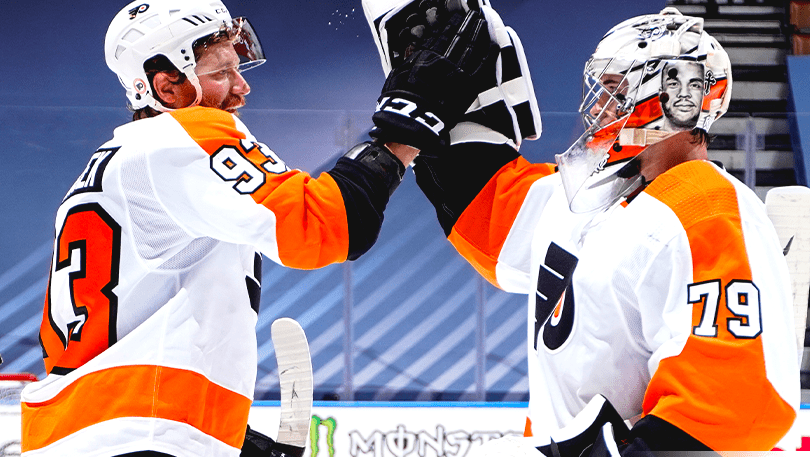 Carolina Hurricanes center Morgan Geekie has played four NHL games during his budding career but is making an impact.

Two of those games have come in the NHL’s Qualifying Round that began this weekend and Monday morning, Geekie recorded his first postseason point.

Centering the Hurricanes fourth line the former Tri-City American picked up an assist in the second period to help pad a Carolina lead as the Hurricanes took a 2-0 lead in their best-of-five series against the New York Rangers.

Geekie, 22, picked the puck up low and battled his way to the front of the net where he slid it to Jordan Martinkook for a score that made it 3-1, Carolina. The Hurricanes would go on to win 4-1.

Grit and Grind are more than just words to us pic.twitter.com/h1TFUKkkPf

“I think it starts from even before the pause,” Martinook said of Geekie’s NHL start. “You saw in the short time he was with us…I think he had five or six points. He’s poised, he holds onto pucks and he works…he’ll hold on to it and he makes plays. It was a great play by him and that was a big goal in the game.”

Martinook was being generous as Geekie scored three goals and added an assist in his brief two-game regular season stint. While not six points, or even five, picking up four in two games is impressive.

He had a stellar career with the WHL’s Tri-City Americans and was a third-round draft pick of the Hurricanes in 2017 – he was selected by Ron Francis, who was the general manager in Carolina at the time and of course is now running the Seattle Kraken.

Geekie was with Tri-City from 2014 through 2018 and scored 78 goals for the Americans – 65 of which came in his last two years in Kennewick. He was a member of the Tri-City club that ran to the Western Conference Finals in 2018 before losing to the Everett Silvertips.

He was also a big part of the AHL’s Charolette Checkers team that won the Calder Cup in 2019. Geekie scored eight goals while recording 18 points in 19 postseason games that spring.

Geekie and the Hurricanes will look for the sweep in Game 3, Tuesday evening.

Carter Hart has always been calm. The pressure cooker of the NHL playoffs hasn’t changed anything.

The former Everett Silvertip star became the youngest Philadelphia Flyers goalie to win a postseason game with his 34-save performance against the Boston Bruins Sunday afternoon. The win gave Hart and the Flyers a 1-0 record in the round robin portion of the postseason.

Hart, 21, was at his best early and then late when the Bruins pulled their goalie for the extra skater. That generated a number of shots for Boston, but Hart was there to kick away them all.

“He doesn’t look 21 to me, he’s pretty poised,” Flyers forward Nate Thompson said afterwards. “Even off the ice he carries himself well beyond his years. He’s a true pro and he reminds me a little bit of a goalie I used to play with in Montreal…he’s our backbone back there.”

Hart played for the Silvertips from 2014 through 2018 and led Everett to the WHL Championship Series in his final season. Along the way he twice won CHL Goalie of the Year and was named WHL Player of the Year in 2018. He was a second-round selection of the Flyers in the 2016 NHL Draft and is no stranger to big games as he twice played for Team Canada at the World Junior Championships, winning gold in 2018.

“Once you get out there and start playing, the game really slows down,” he said Sunday about his first NHL postseason start.  “Obviously it’s a little different playoffs where we don’t have fans…but when the game’s going, and the puck drops, its all the same. You just have to prepare and play your game.”

Thompson , who played with the Seattle Thunderbirds from 2001 to 2005, scored a big goal in the second period to stake the Flyers to a 2-0 lead. While his goaltender was just seeing his first postseason action, Sunday was Thompson’s 63rd such game.

He started the season with the Montreal Canadiens before being sent to Philadelphia at this year’s trade deadline – which feels like a lifetime ago.

“It’s always nice to get a big goal,” Thompson said. “Just trying to get it on net and hopefully I can chip in with some big goals as we get going here in the playoffs.”

The Flyers are off until Thursday when they’ll continue the round robin in a match up with the Washington Capitals.

Former Americans goalie Carey Price puts Canadiens on his back

Carey Price, who played with the Tri-City Americans from 2003 to 2007, was masterful Saturday night to lead the Montreal Canadiens to an 3-2 overtime upset of the Pittsburgh Penguins. He set the tone in the first ten minutes, making unbelievable saves, and would end the night with 39 stops.

Monday, he did all he could to put Montreal in a command position against Pittsburgh, only allowing two goals while turning away 35 Penguins bids. Price didn’t get help from the guys in front of him as Montreal couldn’t score until late in the third period and fell 3-1 to even up the series at a game each.

The swing Game 3 will be Wednesday night as Price will try to put the Penguins’ backs against the wall.

Former Spokane Chiefs defenseman Jared Spurgeon scored a power-play goal and an empty-net tally to lead the Minnesota Wild to a 3-0 victory over the Vancouver Canucks, Sunday. With the win, the Wild take a 1-0 lead over Vancouver in the best-of-five series.

Radko Gudas, who played his junior hockey with the Everett Silvertips, picked up an assist during the Washington Capitals 4-3 shootout loss to the Tampa Bay Lightning in the Capitals first round robin game.

Oilers defenseman, and former Seattle Thunderbird, Ethan Bear had an assist during Edmonton’s 6-3 win over Chicago in Game 2 of their qualifying round. The helper was his first NHL postseason point.