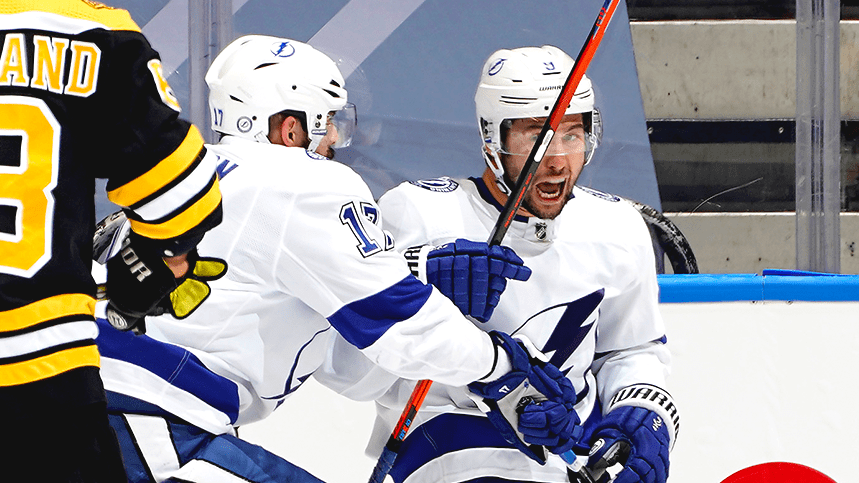 Tyler Johnson’s game-winning goal against the Boston Bruins Wednesday was big. But, to the Tampa Bay Lightning veteran it was a simple enough play.

“It bounced off the pad, right to me,” the former Spokane Chiefs star, who also added an assist, said after Tampa Bay’s 3-2 win in the NHL’s Round Robin play.

Johnson, 30, checks off two boxes of Northwest cred. Not only did he score 128 goals over four seasons for the Chiefs, but he was born and raised in Spokane.

The goal came with just 1:27 left on the clock after Yanni Gourde took a shot that rebounded hard off Boston goalie Tuukka Rask’s pad right to a net-crashing Johnson. The Veteran didn’t miss and notched his 25th NHL postseason marker.

“I think Johnny’s been a great player for us a for a long time,” Tampa’s Alex Killorn said. “He’s played in an All-Star game, could have been the Conn Smythe winner in 2015 if we’d won, he’s a great playoff player. He comes up big in the big moment. That’s a huge moment. He breaks free and gets to the net, big goal at the end of the game. Huge for us going forward.”

Killorn is referring to the 2015 run the Lightning made to the Stanley Cup Final.

In 26 games that spring, Johnson found the back of the net 13 times while recording 23 points. Johnson’s Conn Smythe bid was stopped by the Chicago Blackhawks, who won the Cup in six games.

After being passed over in the NHL Draft, Johnson has been able to carve out an impressive professional career and has been a mainstay with the Lightning since getting the call up from the American Hockey League in 2013.

Johnson had big game experience early on in his junior career. He was a rookie with the Chiefs during their 2008 WHL Championship and Memorial Cup winning team and is still thriving in big hockey games.

Wednesday’s win gave the Lightning a 2-0 record in the round robin as they push for the top seed in the Eastern Conference. To do so, they’ll need a win over the Philadelphia Flyers Saturday.

“This is a brand new thing for us and we’re just trying to play the best hockey we can,” Johnson said. “I think that’s really all we’re focusing on, so that we can be playing our best hockey when our first-round starts.”

In the 40-plus year history of the Seattle Thunderbirds, no defenseman scored as many points as Shea Theodore.

Thursday, the Vegas Golden Knights blueliner reminded of his scoring prowess as he potted a pair of goals to lead Vegas to a 6-4 win over the defending Stanley Cup Champion St. Louis Blues in the NHL’s round-robin. The win moves the Golden Knights to 2-0 and like the Lightning in the East, Vegas has a chance to clinch the top seed in the Western Conference.

Theodore’s first goal cut into a 2-0 Blues lead in the second period. He then capped off the scoring with an insurance marker late in the third. A slick skater with great vision, both of the goals came on wrist shots from the point through traffic.

Shea Theodore get Vegas on the board in the 2nd!#VegasBorn pic.twitter.com/A1JDEfDHD8

“Sometimes that’s all it takes,” Theodore, 25, said. “When you’re the guy up top and it comes to you, you have to get it past one set of shin pads and hope it gets through. I got one through tonight.”

With the Thunderbirds from 2011 to 2015, Theodore’s Seattle career was one for the ages. He won gold for Canada at the World Junior Championships in 2015, won WHL Defenseman of the Year that same season, and was drafted in the first round of the 2013 NHL Draft by the Anaheim Ducks.

The Ducks, in their infinite wisdom, moved Theodore to Vegas during the 2017 expansion draft. Since then, he’s turned himself into one of the top, up and coming, NHL defensemen.

Down 3-1 in the third period it looked like the Columbus Blue Jackets would be on the brink, down 2-1 in their best-of-five against the Toronto Maple Leafs.

That would change as former Portland Winterhawk defenseman Seth Jones sparked a comeback for the ages.

Jones wired a shot through traffic, and goalie Freddie Andersen, to give the Blue Jackets life. They would eventually tie the game and then win it late in overtime as the Leafs are now the ones on the brink and staring into the abyss of endless critique from the Toronto media.

It was the fifth NHL playoff goal for Jones, who was with Portland for the 2012-2013 WHL season. He notched 56 points and helped the Winterhawks win the WHL Championship during his one-year stint in the WHL. The Nashville Predators then took him fourth overall in the 2013 draft and he has been in the NHL ever since.

Jones and the Blue Jackets can wipe out the Maple Leafs Friday as the series wastes no time in getting back into action.