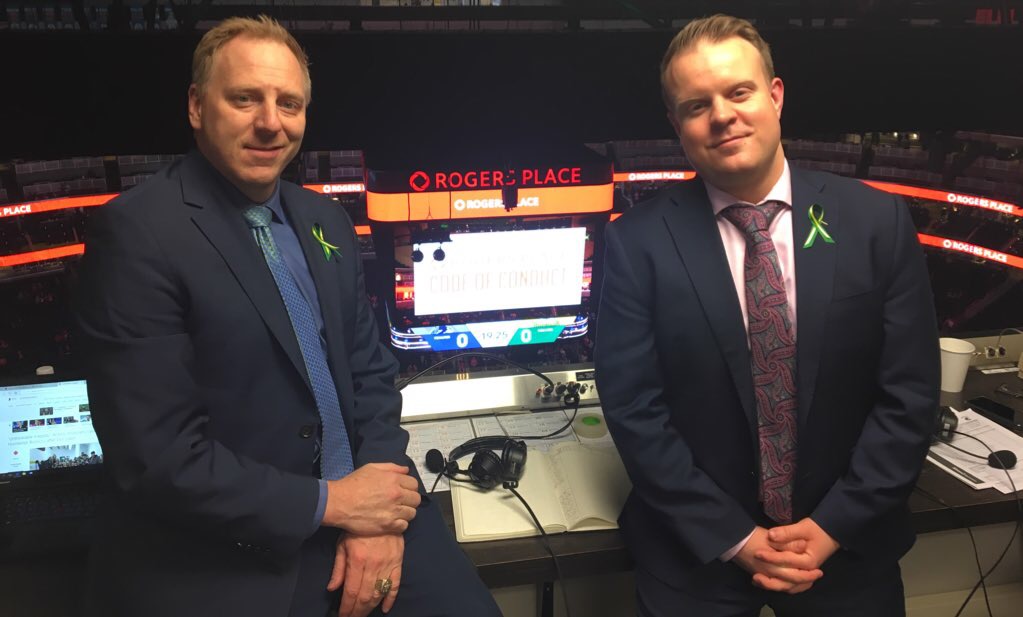 It happened fast. Eleven seconds, to be exact. It was eleven seconds into overtime last Friday night when Vancouver Canucks defenseman Chris Tanev’s shot from the point found its way through traffic and into the Minnesota Wild net.

The goal gave Vancouver its first postseason series win since 2011 and delighted a hockey crazed Canucks fan base. For those listening in on Sportsnet 650, they heard the goal through Brendan Batchelor’s call, which was full of energy.

It was a big moment for Batchelor, who was calling his first postseason series since joining the Canucks radio broadcast team in 2017. But it was also unique because instead of being perched over the ice at Rogers Place in Edmonton, Batchelor and his broadcast partner Corey Hirsch were 700 miles away, calling the game from a small studio in Vancouver.

He was unable to feed off the crowd in the arena that he normally might so Batchelor had to muster it on his own. Something that was easy to do.

“We have thousands and thousands of people that are vested, listening to the game,” Batchelor says. “When all of those people hear me call a big goal, they’re exploding off their couch, just as they would if they were in the 10th row of the lower bowl in Rogers Arena. While we can’t feel that energy like we would, that energy is still out there and we still have to harness that. It’s our job to convey the excitement of an overtime victory, for the first time in nine years, to a fan base that is still celebrating just as hard.”

Calling games in the NHL means that broadcasters sit in booths that offer the best vantage points.

They’re over the ice, able to see every nuance of the game. What is happening on the bench, did a player leave with an injury, what’s going on behind the play. All events that Batchelor normally can view and describe to his listeners.

Because of COVID-19 and the NHL’s Return to Play Plan, radio broadcasters have been kept out of the bubbles in Edmonton and Toronto. They’ve been relegated to studios and television monitors.

Some of the nuances are lost.

The studio set up that Brendan Batchelor and Corey Hirsch call Canucks playoff games from.

In their studio, which is a television studio used by Sportsnet, Batchelor and Hirsch rely on a big monitor that provides the same network feed that fans watching at home get. The NHL has given them one additional monitor, however. It’s a high angle shot from a static camera, an ‘all 12’ camera. The ‘all 12’ allows Batchelor to see the shot clock and what is happening behind the play or on the benches but makes it hard to see numbers on jerseys.

You can’t call a game from that view, not well anyway, so Batchelor and Hirsch rely on the game feed, which has some drawbacks.

“All of a sudden a guy comes darting up the ice, he may have come off the bench, and gets a quick shot away,” Batchelor says about perhaps the biggest adjustment. “The camera pans to the net because he took the shot. You have no idea what player that was. So, we’ve had to get a little creative with things like that. I’ll be honest in saying that I can’t be as specific as I normally would be. I’ll have to say, ‘the Canucks get a shot on goal’ or something like that.”

Like many NHL broadcasters, Batchelor, 31, worked his way up the hockey ladder.

He started by calling games in the British Columbia Hockey League and then spent four seasons as the voice of the Western Hockey League’s Vancouver Giants. That led to the Canucks and the NHL where he is the youngest radio voice in the league.

Those lower levels of hockey prepared him to make adjustments calling games. While he never had to call from a television, there were some challenges with the smaller rinks and less than ideal broadcast locations.

“There’s an arena in Merritt, B.C., in the BCHL, where’s there’s a hanging heater that goes the length of the ice right down the middle, right in your view off the booth,” he says. “When I did games there, I had to jump on a chair to see one side of the ice and jump down to see the other.”

He’s called games off television before as well, just not as a professional.

Growing up, Batchelor would mute the sound while watching NHL games and do his own play-by-play. He recalls his father taking him to see the Canucks play the Kings at Vancouver’s Pacific Coliseum when he was five. He knew all the players and provided an on-going commentary.

“I’ve been talking through hockey games my whole life,” he says.

Hockey fans had to endure a five-month stretch without the sport they love this year and Batchelor is no different. To kill time, and offer entertainment with some levity, Batchelor solicited home videos from his Twitter followers this summer and added some play-by-play.

With hockey back now, many of the NHL television broadcasts during the playoffs this summer are being done remotely. But, the radio call has a unique challenge that TV broadcasters don’t have. The picture can do a good portion of the talking when the game is being viewed. Radio listeners need more detail.

Batchelor takes his role in that seriously, even more so with the current state of the world and the thirst fans have for sports.

“The one thing I’ve really tried to focus on in this COVID era where we’re calling games off the monitor is just being ultra-focused and ultra-prepared so I’m not giving myself any excuses,” he says. “I need to paint an entire picture for (listeners). I need to let them know what color jersey each team is wearing before the game. I need to let them know which way each team is skating.

“One of the best pieces of advice I was ever given in my play-by-play career, was on radio you have to convey where the puck is on the ice… you can describe a goal and be accurate but you have to paint a picture. If I say ‘J.T. Miller passes to Elias Pettersson and Elias Pettersson scores’, that’s accurate but if I say ‘J.T. Miller has it in the left circle ,passes to Pettersson for a one timer that he puts over the glove of the goaltender’, that’s something you can picture in your mind.”

Thousands of Canucks fans will be tuning in to hear how the play unfolds. They’ll rely on Batchelor and Hirsch to paint that picture for them. They’ll hang on every word and perhaps will close their eyes to envision the game through Batchelor’s call.

“We’re not trying to hide anything,” he says. “When we come on the air we make it clear we’re broadcasting from a studio in Vancouver… Our aim is to bring the same quality product that we bring all the time. These are the biggest games we’ve ever done. I’m really proud of what we’ve been able to give to Canucks fans by providing some really good coverage.”

To listen in on Batchelor’s call of the Canucks playoff run, head to Sportsnet 650 here, or through the NHL app.