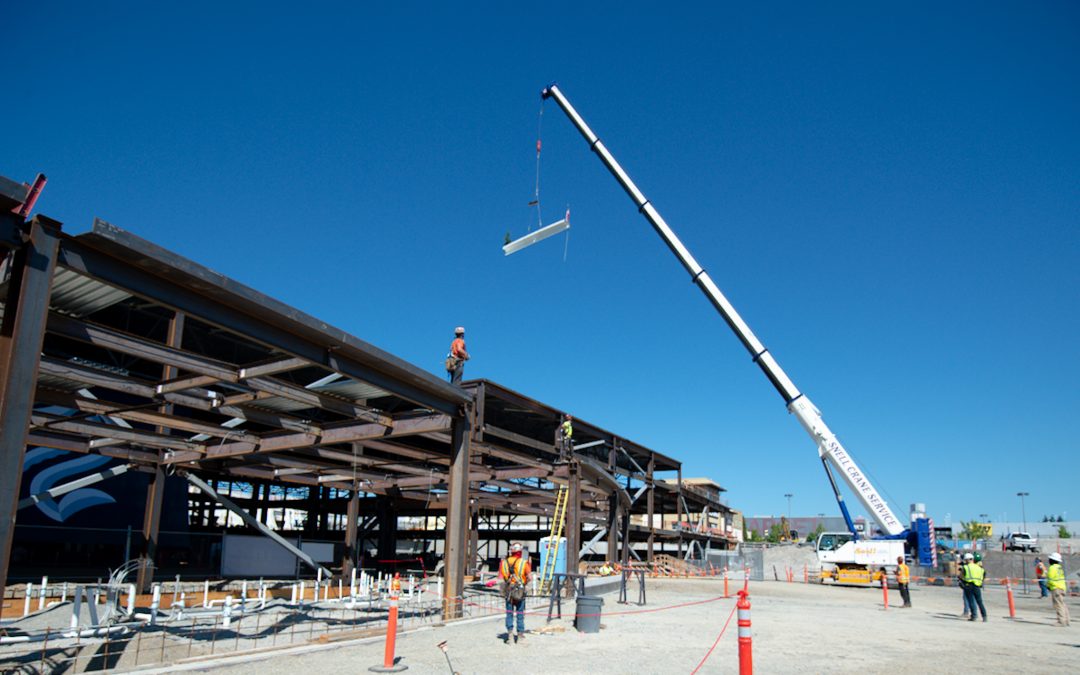 SEATTLE — Against an impossibly blue sky, a crane swung a steel beam around before lowering it down to two workers perched up high on the frame of the structure. The workers secured the beam into place as hundreds of their fellow BN Builders crew members on the ground looked on. Once secured, the final beam in the Seattle Kraken’s Northgate practice facility was installed.

Monday’s activities were what are known as a ‘topping off’ ceremony and is a celebration of a major milestone in the construction of the Northgate Ice Centre.

The three-sheet practice facility, which will also serve the community by allowing public access to the ice, has taken shape. All three rinks are visible, although made of dirt rather than ice at the moment, and missing boards, benches, and glass.

To reach this point in the project, which broke ground in February, crews had to excavate 25,000 cubic yards of dirt and install just short of 3 million pounds of structural steel.

Installation of the final beam on Monday was the result of 2,700 man hours and the crew celebrated with raucous cheers as the beam was set in place. All of the workers got a chance to sign the beam before it was hoisted in the air, forever cementing their names into the Northgate project.

Inside, in one of the rinks, prior to the beam being secured, BNB workers, along with team staff and visitors, gathered in front of giant flag with the now widely popular Kraken ‘S’ on it.

“We know that under this roof that you’ve built, amazing things are going to happen…you’ve played a really important role. Never, ever forget, and forever take credit…I can’t wait to come back and invite all these men and women back. I’m buying the beer and we’re going to celebrate.”

The Northgate Ice Centre is an 180,000 square foot project, located on the east side of the mall where the Macy’s Department Store had been, and will serve as a practice space for the NHL club as well as house its staff. Along with the three rinks, the facility will feature a restaurant and a Virginia Mason Clinic.

One of the three rinks at the Northgate Ice Centre practice facility. (Brian Liesse photo)

“This is thrilling,” Kraken executive counsel Lance Lopes said. “It’s been fantastic to see this thing take its final structure. We’ve known how big and impressive it was going to be for some time. But, until you actually see it in place, it really hits you. We’re so excited about what we’re about to bring to Seattle.”

Work on the project was briefly stopped in March as the State limited what construction projects could be worked on during the COVID pandemic.

Eventually given the green light, the work continued with workers following strict social distancing and masking procedures. With the final beam in place, work can now begin on completing the structure, putting in walls, windows, and at some point, next summer, ice.

“We have a lot of work to do still but we’ve been able to continue to stay on pace,” Lopes said. “We’re really happy with the way our construction teams have stepped up and stayed safe. We’ve haven’t had any positive tests out here. The team has really been paying attention and we have a safe site and an on-time site.”

Check out pictures of the structure in a gallery from photographer Brian Liesse: