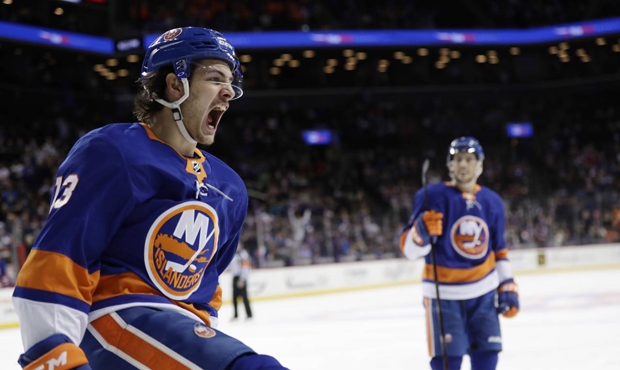 At the end of Game 7 between the New York Islanders and the Philadelphia Flyers, Mathew Barzal looked like he belonged on the UFC’s Fight Island instead of Long Island.

The New York, and former Seattle Thunderbirds, star had stitches over his right eye and a bandage in his nostril to assuage bleeding incurred from a collision on the ice. For good measure, he was tagged in the head by an errant puck during warm-ups. It was a rough series for the 23-year-old.

He looked like he’d been playing playoff hockey. Any pain he might have been feeling was tempered by the fact his Islanders were moving on to the Eastern Conference Finals for the first time since 1993.

“As you go along, you’re going to look more and more like a hockey player if you’re winning,” Islanders head coach Barry Trotz said about Barzal after the game. “So right now, he’s getting a little marked up. I loved his response. He’s taking sticks to the face, things are happening. They’re taking shots at him, all that, he’s just playing through it. That’s the growth of a young player.

“That might have been his best game as a pro, since I’ve been on the island. He played the right way, he was dangerous, his battle level was high, and his focus was razor sharp…there was no cheat in his game.”

That’s high praise for a guy who didn’t record any points in Game 7 but Barzal has been dangerous throughout the post season and will be a player to watch as the Islanders start the conference finals against the Tampa Bay Lightning on Monday.

His 13 points (5 goals, 8 assists) aren’t the tops on the Islanders stat sheet but he’s contributed night in and night out, forcing the play, and creating chances. “The points will come,” Trotz added after Saturday’s game.

If the points come, and New York advances, Barzal could become a contender for the Conn Smythe.

Barzal has been a positive possession player for New York, with a Corsi-For Percentage of 53.9 at five-on-five. He’s creating grade-A scoring chances for himself and his teammates. With Barzal on the ice, the Islanders have 69 high-danger chances while the opponents only have 38.

Trotz has his team playing a detail-oriented game based on a strong defensive foundation. Barzal has fit in well, playing a 200-foot game, back checking, and at five-on-five the Islanders have outscored the opposition 12-5 during Barzal’s shifts.

While he doesn’t lead the Islanders in goals scored, his scores have been of the timely variety. Two of his five goals gave the Islanders a lead and one, a spectacular one, was an overtime winner against the Washington Capitals in the first round.

Barzal centers a line with Jordan Eberle and Anders Lee on his wings. They’ve been good for New York and will have to continue to play well against a deep and talented Lightning squad. They’re a line that has been buzzing and perhaps have yet to cash in as much as they potentially can.

Collectively they’re shooting at a 4.67 percentage which is lower than their regular season mark of 7.1. If that percentage rises to its norm, then the Lightning will have some problems.

With the offensive fire power that Tampa Bay features, Barzal and company will have to play a responsible game. Thus far in the playoffs, Islanders goalies have a combined .951 save-percentage when the Barzal line is on the ice.

They’ll need to continue that if they want to reach the Stanley Cup Final.

While Barzal isn’t the front-runner in the MVP race, he’s in the conversation and the next few weeks will determine how serious of a contender he is. He has some experience in this area, winning Playoff MVP in 2017 with Seattle as he led the Thunderbirds to their first WHL Championship.

For a player who loves to compete, and craves to be a difference maker, it might be foolish to bet against him.