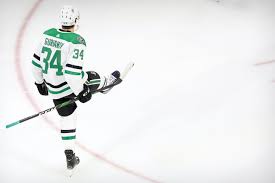 Raise your hand if you picked the Dallas Stars as your Western Conference champions at the beginning of the 2019-2020 season.

Ok, now raise your hand if you had the Dallas Stars as your Western Conference champions at the beginning of the playoffs.

Ok, now raise your hand if you ever once envisioned Anton Khudobin as the catalyst to bringing a team – any team at all – over the hump and into a Stanley Cup Final.

There you have it. Scientific proof that nobody saw this coming.

Now, in the interest of fairness, perhaps the collective dismissal of the Stars by the hockey universe was a bit hasty, especially considering that this is a team that did actually win a playoff round in 2018-2019, and pushed the eventual Cup-winning Blues to a seventh game in the second round.

But – and again, this is in the interest of fairness – the core of this team has not been altered in years (by “core” I obviously mean Jamie Benn and Tyler Seguin), and since the two-headed monster was born in 2013-2014, Dallas had never gotten beyond the aforementioned second round. This core missed the playoffs completely three times in seven seasons with that two-headed monster leading the way. Heck, this core was referred to as “f***ing horses**t” by team CEO, Jim Lites, to close out the 2018 calendar year.

So why are the Dallas Stars suddenly so great? What’s different this year?

**Editor’s Note: NHLtoSeattle is aware that literally everything in the world is different in 2020, but we’re talking specifically about the Dallas Stars here.**

Well, a lot is different, actually, as apparently there is now more to the Dallas Stars than just Benn, Seguin and Alex Radulov.

GM Jim Nill made a series of shrewd moves over the past two seasons to bring in veterans Andrew Cogliano, Blake Comeau, Corey Perry, and – most notably – Joe Pavelski, a consummate playoff performer who has predictably been a beast in this postseason with nine goals and five assists.

The problem with this team for the better part of a decade was that it was glaringly top heavy. Central Division fans may remember watching Ken Hitchcock send Seguin, Benn, and Radulov out to get their goals – which they did often get – only to have zero secondary or tertiary attack to support them night after night.

Teams with effective checking lines could easily run them out against that top trio, and if they were successful in shutting down the big three, then the game was all but won. Now, with these reliable veterans sprinkled through the second, third, and fourth lines, “easy to check” simply isn’t in this team’s identity anymore.

Individually, none of those acquisitions would have moved the needle enough to get this team to the promised land, but as a whole, the addition of this veteran depth has had a profound impact.

Fans of the Central may also remember that while there wasn’t much veteran depth in the lineup a couple of years ago, there were some decent young players that looked to be developing positively, with John Klingberg already standing out on the blueline. Well, fast forward, and now Miro Heiskanen has emerged as another one of the best young defensemen in the NHL, while up front, Denis Gurianov and Roope Hintz appear to be superstars in the making.

Both still just 23 years old, Gurianov and Hintz combined for 39 tallies during the regular season, and have continued contributing in the postseason. Gurianov has notched some of the biggest goals in franchise history (nine in all, plus eight assists in 21 games) to help propel this club into the Final.

Below, take a look at a Stars line-up from 2018-2019 (left) versus the current Stars line-up (right), according to DailyFaceoff.com. While many of the main characters are still around, it’s the supporting cast that has quietly evolved and developed, and this has made all the difference in Dallas.

Meanwhile, you have a lovable “interim” head coach in Rick Bowness, who Nill has indicated will return next year, as the second-biggest no-brainer coaching hire in recent history behind Craig Berube.

The long-time journeyman benchboss has been everywhere, and comically quipped to NBC Sports recently that when his team faced Calgary in the first round, “It was one of the few teams in the league that I had never coached any of their players.” Bowness brought a 123-289-51 career record to the table at the time of his promotion in December, but turned in an impressive 20-13-5 before the NHL’s March shutdown, and is 12-8 in these playoffs.

Now at the precipice of head coaching greatness for the first time in his 30-year career, Bowness has had a positive impact on countless players over the years, and his jovial spirit certainly seems to be rubbing off on his current squad.

And speaking of a jovial spirit, who can forget this guy?

Ben Bishop was the big free agent splash signing three years ago, and if the Stars were going to make it to a Stanley Cup Final, it would certainly be him that would lead them there, right?

Though unorthodox in playing style, Anton Khudobin has always been an effective back-up netminder, with a solid 2.46 GAA and .919 save percentage in 218 career games played. He’s the kind of guy that every team loves to have around, because you can throw him in net on any given night – even when he isn’t expecting to play – and he’ll still give you a chance to win that’s at least close to what the starter would have provided. And heck, if the starter goes down with a significant injury, Khodobin could even take the reins for a few consecutive games and pick up some wins in the process.

That’s exactly what has happened in these playoffs, and not only has Khudobin taken the reins with Bishop on the shelf since the first round, he’s been the biggest reason that Dallas now has an opportunity to hoist hockey’s greatest prize.

Dobby has been so good that he may have finally played himself into a starting role with another franchise when his contract ends after this next series.

The Stars have caught lighting in a bottle, which is ironic, because they could face the Tampa Bay Lightning in the Final. Everything is going right for this team right now, as it seeks its second Cup in franchise history, from the coach to the veterans to the young players to the quirky career backup netminder, who just happens to be on fire at exactly the right time.

Maybe these guys aren’t f***ing horses***t after all.