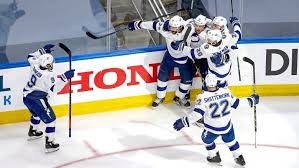 The Tampa Bay Lightning represent “Team A” in the Stanley Cup Final as the Eastern Conference Champions that everyone expected.

If you look back at the last… oh… let’s say six Stanley Cup Finals, the matchups have tended to be of the following format – Team A, the one that everyone expected to be the last team standing, versus Team B, the team that nobody thought had a shot at the title entering the playoffs.

For example, in 2014, the Los Angeles Kings – Team A – defeated the New York Rangers – Team B – in five games. Everybody expected the Kings, who were one year removed from a 2012 championship, to be there, while the Rangers shocked the world with their qualification for the Final. Similarly, the St. Louis Blues (Team B) surprised the hockey world last season by going from last in the league when the calendar year turned to finding the sport’s holy grail in June. The final boss of last year’s video game of a season in St. Louis was the Boston Bruins (Team A), a team that the hockey world perennially expects to be among the last remaining combatants.

The 2015 Final between the Chicago Blackhawks and these Tampa Bay Lightning fit this mold nicely too. Chicago had won in 2010 and 2013, so no surprise there, while the Lightning, packed with young and raw talent, had risen quickly to prominence under Jon Cooper in his second full season behind the bench.

SHIFTING FROM “TEAM B” TO “TEAM A”

The Lightning were not expected to make that deep of a run at that stage, but once they had, they established themselves as long-term contenders in the NHL. They lived up to this billing twice in the subsequent years, making it back to the Eastern Conference Finals in 2016 and 2018. But they also endured missing the playoffs completely in 2017 and getting embarrassed with an opening round sweep at the hands of the Columbus Blue Jackets last season, which had the rumor mills churning out plenty of “Fire Jon Cooper” content.

It’s been Stanley Cup or bust for this team for six years now, so knowing that Cooper’s emotions after Anthony Cirelli’s Game 6 overtime winner on Thursday were “Exuberance and relief,” makes all the sense in the world.

This team has fallen short so many times, and has been favored so frequently in the last few years, that at some point it risked falling into a Team B category. So why now? What’s different for these 2019-2020 Tampa Bay Lightning that has made them Eastern Conference Champions for the first time since that remarkable run in 2015?

It’s no secret that this roster is absolutely loaded with superstar talent. From Vezina-nominated Andrei Vasilevskiy in net, to Norris-nominated Victor Hedman on the blueline, to two-time 100-point scoring Nikita Kucherov up front, there is elite talent everywhere you look.

There’s a saying among NHL coaches that you need your best players to be your best players to win, and these guys have been Tampa Bay’s best players in these playoffs. You may recall that in last season’s CBJ debacle, Kucherov did not score, and was actually suspended one game for a downright reckless hit that nearly took the head off of Markus Nutivaara. Kucherov has redeemed himself by doing absolutely everything this postseason, with 26 (!!) points in 19 games, leading all playoff participants.

Meanwhile, Vasilevskiy has been outstanding with a .931 save percentage and 1.82 goals against average after an abysmal .856/3.82 line in a small four-game sample size in 2019. And Hedman… whoa… with 15 points from the blueline and some clutch goals along the way, Hedman is making a real case to finish the season as your Conn Smythe AND Norris Trophy winner.

But other guys have taken huge steps to get this team over the hump this year, most notably Brayden Point. Point emerged as a true superstar during the Lightning’s dream regular season in ’18-’19 with 41 goals and 51 assists, but then (like everyone else on the team) went quiet in the playoffs, contributing just one goal in the team’s four games. Conversely, he’s been a force this postseason, with nine goals and 16 assists. Point’s health is a question mark for the Final, as he missed two games of the last series before obviously being rushed back for Game 6, but indications are that he’ll gut it out.

Speaking of superstars with questionable health, the Lightning have remarkably made this whole run without captain Steven Stamkos, who hasn’t played since February, but also hasn’t been completely ruled out of the Final by GM Julien BriseBois.

The Lightning and their Final opponent from Dallas have few similarities in make-up, but one thing that sticks out as a parallel between the two organizations is the shrewd veteran additions recently made by both to bolster their respective rosters. Like Jim Nill in Dallas, BriseBois made a few moves that on paper probably should have had minimal impact, but in the end, they’re paying huge dividends collectively.

Fresh off a Stanley Cup in his hometown, Patrick Maroon signed for one year with the Lightning, bringing some needed grit to a team that

previously had none. Maroon is the quintessential fourth-liner for a playoff squad, and has shown he’s worth every penny of the bargain $900K contract that he finally signed just days before training camp. For a time, it looked like nobody wanted him, which was a bit puzzling considering his recent success.

Speaking of bargain players that seemingly nobody wanted, Kevin Shattenkirk was bought out by the New York Rangers, then signed a one-year “prove it” contract with Tampa Bay for just $1.75 million. Talk about worth every penny, Shattenkirk has again emerged as a top-pairing defenseman that plays 17 minutes per night and has chipped in offensively with nine playoff points. He’s been a perfect complement to Hedman, and will certainly get paid more than $1.75 million next season, wherever that may be.

And let’s not forget the pre-deadline trades for Barclay Goodrow – which had people scratching their heads at the time, as it cost the Lightning a first-round draft pick – and Blake Coleman, who play together with Yanni Gourde on the third line. You’ll hear about the team’s change in style in the next section, and Goodrow and Coleman have been huge contributors to the team’s successful commitment to detail in its own zone.

The biggest difference for the Lightning this postseason has been the approach they brought into the NHL’s return-to-play bubble. If you recall the historic 128-point campaign that the Lightning breezed through in 2018-2019, they encountered zero adversity. They were winning almost every night and winning big, with a +98 goal differential in total.

But their style of play – scoring their opponents to death – doesn’t always translate to playoff hockey, and that’s exactly what we saw when John Tortorella’s Blue Jackets flipped the script and defended Tampa Bay to a swift death. Coop’s Troops learned from that embarrassing ousting, and came into the bubble knowing that this could be their coach’s last stand if the team made another early exit.

This season, the Lightning faced some adversity, immediately getting punched in the mouth with a lackluster opening to the season, and hovering at an unimpressive 17-13-4 record as the Christmas holiday approached. But they endured and overcame, and it was at that point in the season when they turned it on, rattling off ten straight wins between December 23rd and January 11th. They followed that up with another eleven-game win streak starting on January 29th, but then limped into the NHL’s COVID-related pause, winning just three of their last ten.

But when the league re-started within its bubbly confines in August, there had been an obvious change in Tampa Bay’s style. They’re now visibly more committed defensively (again, Coleman and Goodrow have been a big part of this), and playing with more grit and determination than they were last year. They seem to be more interested in keeping their opponents to low numbers on the scoreboard than they are about running it up offensively –which they still do on occasion – as we saw in the closing games of the Eastern Conference Final against the Islanders.

The result, with the help of some stellar play from Vasilevskiy, has been a remarkably low team goals against average of just 1.42 per game in the playoffs, while still managing to rack up 2.25 per game themselves. Meanwhile, according to NaturalStatTrick.com, Tampa Bay has had 57.3% of the expected goals for, indicating that they’ve certainly had the better of the chances throughout the postseason, while Final opponent Dallas has managed just 49.2%.

Tampa Bay is a team that – after years of falling short – seems to finally understand how to win a Stanley Cup. Now all that’s left to do is actually win it.