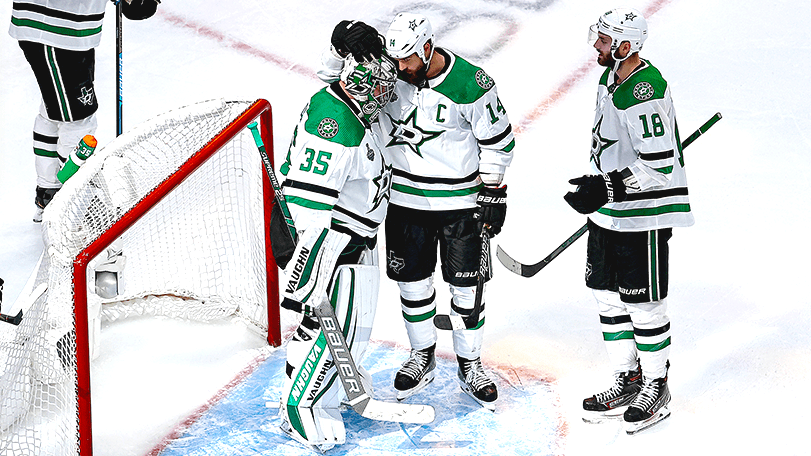 In May the Stanley Cup Final being played felt like the longest of long shots. But NHL Commissioner Gary Bettman and the league found a safe way to restart the season and finally, Game 1 of the finals happened Saturday with the Dallas Stars taking Game 1 over the Tampa Bay Lightning in a 4-1 win.

Dallas goalie Anton Khudobin continued his stellar playoff run by kicking away 35 shots and the only goal he allowed came off of Yanni Gourde’s skate in the first period.

“(My teammates) they cleaned up really well whenever I had rebounds,” Khudobin said after the game. “I try to do my part and they tried to do their part. It’s great when you see the guys blocking shots and cleaning the front of the net.”

Game 2 will be Monday evening.

The Stanley Cup made an appearance

Normally, we have to wait til a clinching game to get our first glimpse of the Cup. Perhaps to help build the suspense in a Rogers Place that had no fans, the Cup was front and center during the pregame introductions and anthems prior to Game 1.

Placed above the rink, at center ice, the Cup was illuminated by lights and was an in-person reminder of what was at stake. It was a nice touch and helped build some suspense. A hit with fans, it may not have had the same effect on the players.

“I didn’t see it,” Dallas forward Blake Comeau said. “But obviously when you walk into the rink, they’ve got some banners up and signs are around. Other than that, it felt like another game and that’s how we wanted to approach it.”

That attitude worked for the Stars, who enter a series as the perceived underdog for the third straight round. Dallas has its eyes on the prize, even if the Stars didn’t actually see the prize before the game.

“Didn’t see it, doesn’t matter,” head coach Rick Bowness said. “Only thing that matters is the next game…you can’t afford to think about those things.”

Khudobin stars again for the Stars

The playoffs are known for creating stars out of previously overlooked players and Khudobin has burst on the scene this year.

He was at his best Saturday night in the third period when Tampa Bay out-shot the Stars 22-2. His mates had scored their way to giving the veteran net-minder a two-goal lead and the Lightning started pressing. Khudobin made a huge toe save on Anthony Cirelly to start the period and never looked back as he held the Lightning at bay.

The overhead view of that Khudobin save 😱 pic.twitter.com/itfhhUTuoO

It is hard to describe the style Khubobin plays. It’s not traditional and it reminds of the frantic and athletic style that made Dominik Hasek one of the game’s best.

He was supposed to be the back up in the postseason, playing behind Ben Bishop but injury forced him to the net, and he has his club three wins away from winning the Cup.

In 20 playoff games, Khudobin’s posted a goals-against of 2.54 with the league’s second best save percentage of .923.

After Dallas controlled the play during the first period – with a Corsi-For of 70 percent – the Lightning got going over the last two periods.

Thanks to a dominating third period, Tampa Bay ended up leading the Stars in shots (36-20), shot attempts (55-35), and scoring chances (21-19). This is not new to Dallas as they won games against the Vegas Golden Knights in the Western Conference Finals where the stats said they should have lost.

The numbers are lopsided but the Stars did a good job of forcing Tampa to take a lot of less dangerous shots from the outside.

“We try to keep them to the outside,” Bownes said of the shots. “We’ll give them the outside shot…when we’re playing our game, we’re keeping shots to the outside. It’s not just your five-man unit, it’s your six-man unit. Your goalie has to know what shots you’re willing to give up.”

It would be an understatement to say that Khudobin is aware.

No points for Brayden Point

Tampa’s Brayden Point has been a force for the Lightning throughout the playoffs with 25 points in 18 games. The 24-year-old missed two games against the Islanders in the Conference Finals due to injury and Tampa Bay lost both contests.

He was in the lineup Saturday, but the Stars did a masterful job of containing, and silencing the young star.

Point was on the ice for over 20 minutes Saturday but was held to no points, no shots, no scoring chances, and was on the ice for three goals against. Despite not having last change, Bowness was able to get defensemen Esa Lindell and John Klingberg out against Point the most Saturday and the pair shut things down nicely.

It’s hard to imagine Point being shutout two games in a row and he will be a key player to watch going forward.

Two of the Dallas goals Saturday came from their blue line and the defense scoring goals has become a theme of the Stars playoff run. The two scores give the Dallas defense 15 goals this postseason.

Leading the way is budding superstar Miro Heiskanen with five – along with his 23 points – but it wasn’t the usual suspects in Game 1.

Dallas opened the scoring in the first period with a high-slot goal from Joel Hanley. Not only was it the first of the playoffs for the 29-year old defenseman, but it was the first goal in his NHL career.

“Obviously it’s something you dream about when you’re young,” Hanley said. “It’s just cool to be able to contribute with a goal like that.”

Jamie Oleksiak would get in on the blue line scoring with a nice put back of his own rebound in the second period. The score ties him with Heiskanan with five and would turn out to be the game-winning goal.

“We went into training camp in July, we put the first three days focusing on our defense getting a lot more involved,” Bowness said. “Not only in the rush but in the offensive zone…in this day you need your D to be more involved in your offense, you just have to.”