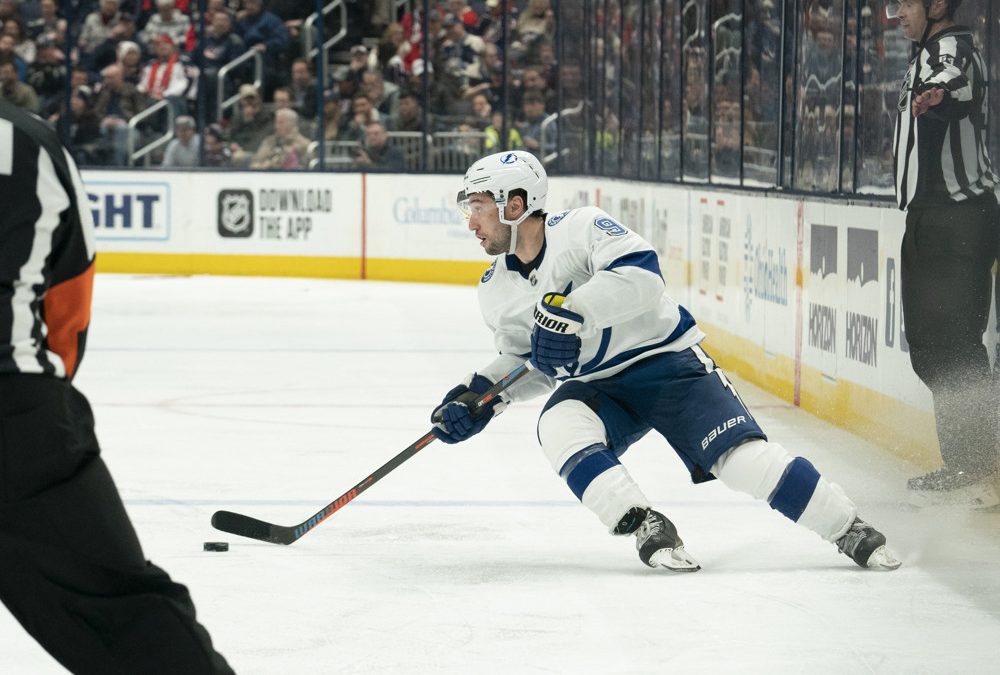 It didn’t take long for Dustin Donaghy to realize his Spokane Chiefs teammate Tyler Johnson was just one of those guys.

You know, one of those guys.

The type of person imbued with so much swagger and subtle confidence that winning just seemed easy.

Whether it was 3-on-3 games, shinny hockey, or games of Halo, Donaghy found out quickly during both of their rookie seasons in the Western Hockey League that Johnson was that type of slightly trusting, but mostly awe-inspiring person.

“He was just clutch, just with everything,” said Donaghy, who is now entering his second year on the Chiefs bench as an assistant coach. “… Tyler, in my mind, he always had his hand in something in a positive manner.”

Winning has been a constant for Johnson, a Spokane, Washington native, in all levels of hockey.

Johnson and the Chiefs won the Memorial Cup, one of the two most coveted championships in junior hockey, and won a Gold Medal with Team USA at the 2010 World Junior Championships in Saskatoon and Regina, Saskatchewan, the second most coveted.

He won a Calder Cup Trophy with the Norfolk Admirals in his first season in the American Hockey League. Johnson was named to the NHL All-Rookie Team and a finalist for the Calder Memorial Trophy in 2014.

And for the second time, Johnson and the Lightning are on the verge of the most prodigious accomplishment in hockey: the Stanley Cup.

In the WHL, teams are allowed a 50-player protected list. It includes active players, bantam draft picks and other prospects.

And according to John Blanchette of The (Spokane) Spokesman-Review, there was a time when the Spokane Chiefs dropped their hometown 11th-round draft pick for another prospect.

Yes, that same player valuable enough to sign a seven-year, $35 million contract for a Stanley Cup Finalist wasn’t even deemed worthy of being one of the 1,100 players protected by the WHL.

Some of that may have been because of his size — he’s listed at only 5-foot-8 and 185 pounds, but the Spokane native proved to be somewhat of a late bloomer, too.

After failing to make the Chiefs team as a 16-year-old rookie, he erupted with a 120-point season for the Coeur d’Alene Lakers, a Junior ‘B’ team, and helped junior hockey decision-makers notice him.

It didn’t take long for his Chiefs teammates to notice him, either.

“Just looking at him, he kind of had his boyband haircut. You’d look at him and you’d think, is he really a hockey player?” Donaghy said of his first impressions of Johnson in 2007, their rookie seasons. “Then we’d get on the ice, and we’d say, ‘Wow, he’s way more than what he looks like on the outside.”

Of course, Johnson made his way back on to the Chiefs’ list and not only cracked the Chiefs’ Memorial Cup-winning roster as a 17-year-old rookie but was named playoff MVP after totaling five goals and eight points in 23 games.

“He fit in right from the get-go,” Donaghy said.

Johnson had his doubters because he was so unassuming, but it only took a couple of skates for his teammates to buy-in to Johnson being an influential player.

His impact in Junior Hockey was gradual, and while the undersized forward was one of the league’s top scorers as a 19-year-old, no draft buzz followed that production.

Johnson was even looking at playing USports hockey in Canada — or even just attending college in the U.S., where he wasn’t able to play varsity hockey due to the NCAA’s ridiculous amateurism rules, he told The Spokesman-Review, before his 20-year-old season, where he exploded for 53 goals and 115 points as an overage player.

Johnson ended his tenure in Spokane is a hell-of-a-lot of points, a gold medal with Team USA at the 2010 World Junior Championships and, of course, a Memorial Cup run that started it all.

Still, Johnson never attracted much, if any, draft buzz, likely due to his diminutive size.

But Tampa Bay was eventually convinced and inked him as an undrafted free agent.

Johnson was a key cog in the Lightning’s 2015 Playoff run, forming ‘The Triplets’ line with Nikita Kucherov and Ondrej Palat. Johnson led the postseason with 13 goals and tied Patrick Kane for first with 23 points as the Lightning finished as Stanley Cup Finalists.

The Lightning fell to Chicago in six games in the 2015 Stanley Cup Final, the franchise’s second appearance.

Currently tied 1-1 with the Stars entering Wednesday’s Game 3, Johnson and the Lightning are presented with another bite at the apple.

Johnson was born into a hockey family of sorts.

His parents, Ken and Debbie Johnson, met playing a rec-league hockey game at Spokane’s Eagle’s Ice-A-Rena. Debbie was a skating coach, who not only taught Tyler how to skate, but the Yamamoto brothers, Kailer and Keanu, as well.

Johnson is a cornerstone, along with Derek Ryan and Kailer Yamamoto, of an underground hockey community in Spokane and Northern Idaho that’s never been confused as a hockey hotbed, but has a burgeoning player pool and a passionate, underground fanbase.

It’s been a tradition for all three to attend high school in the Spokane area — Johnson attended Central Valley in Spokane Valley — and, of course, play for the Chiefs as a hometown kid, an enriching experience that also comes with the burdens of unrealistic expectations.

Johnson cut through any concerns from the jump.

“He was the one that had to decide of enjoying the fame of being a hometown kid or really pursuing a career,” Donaghy said. “Obviously, that’s what he’s done and he’s a huge impact in Tampa’s lineup right now in the Stanley Cup Final.”