What you missed during the 2020 NHL Draft 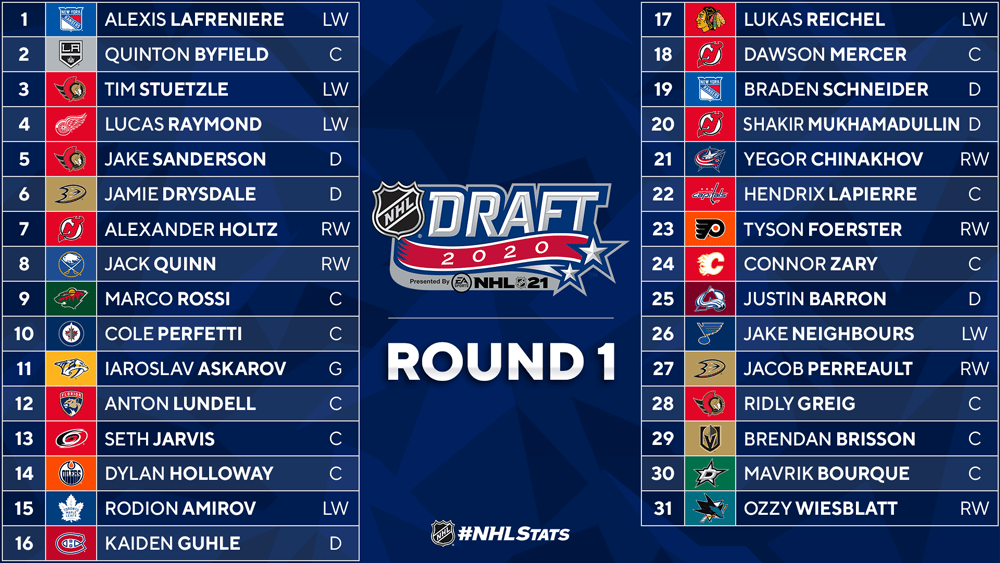 An NHL Draft in October? It wouldn’t seem possible that is what the pandemic world brought us as the NHL went online for this year’s selection fest.

Tuesday’s first round didn’t offer too many shocking surprises but there were picks of interest.

As expected, the New York Rangers took Alexis Lafreniere from the QMJHL with the first overall pick and he should jump right to the NHL. The real drama was who would go second to the Los Angeles Kings.

The Kings ended that drama by taking Quinton Byfield from the OHL’s Sudbury Wolves at number two while German star Tim Stutzle was snatched up by the Ottawa Senators with the third pick.

Day two of the draft took place Wednesday and we mean all of Wednesday. With the draft taking place online the pace slowed and it became the unbearable length of the Draft. What started at 8:30 AM Pacific ended close to 4:30 PM.

At that kind of pace it is easy to miss things but we’ve got you covered. Here are some of the highlights from the 2020 NHL Draft that you may have missed.

By coming off the board second overall Byfield became the highest drafted black player in the history of the NHL. Two players, Seth Jones in 2013 and Evander Kane in 2009 were selected fourth overall in their respective drafts.

“It definitely means a lot to me,” Byfield said of the honor. “It’s something special and being in the record books for anything is special…my Dad and Mom didn’t play hockey or have too much knowledge about that. It’s just growing the game together. It just shows that there’s a lot of opportunity for everybody in the world and you can play every sport and be successful in it.”

The Germans are coming

Earlier this month Leon Draisaitl became the first German player to win the Hart Trophy as the NHL MVP. He was drafted by the Edmonton Oilers, out of the WHL, in 2014. It was the highest a German player had been drafted and now he has company as Stutzle went to the Senators at number three Tuesday night.

Early in the second, at pick 34, Buffalo drafted John-Jason Peterka from Munich giving the Germans three players selected early in the draft. You can bet some scouting trips overseas are being booked to take a closer look at the German leagues.

Canadian players led the way over the two-day draft, with 70 players selected. That was followed by 52 American players and 32 Swedes.

In all, players from 13 different countries and 27 different leagues were drafted.

Ottawa 67’s (OHL) star Marco Rossi was taken ninth overall by the Minnesota Wild and he became the fifth Austrian born player picked in the first round and only Thomas Vanek – picked fifth by Buffalo in 2003 – was taken out of Austria higher.

They’ve been the butt of jokes for the past few years thanks to some head scratching PR fumbles as well as a lot of losses but the Ottawa Senators had two good days.

Loaded with 13 picks coming into the Draft, the Senators used three in the first round, starting with Stutzle at three. They also held the fifth pick and used it to take US defenseman Jake Sanderson from the USNTD program. Ottawa finished their first-round haul by looking at the WHL to pick Ridley Greig from the Brandon Wheat Kings at 28.

The Draft ended with 10 picks going to Ottawa plus they picked up a starting goalie after swinging a trade with the Pittsburgh Penguins for Matt Murray. The Senators sent Jon Gruden and a second round pick to the Penguins in the deal.

Suddenly, the Senators aren’t so funny.

Another strong draft for the WHL

For the second straight Draft, the WHL saw 28 players taken by NHL clubs. Last year that was tops among all development leagues and while the league had another strong showing, it came up three short as the OHL led the way with 31 players picked.

Portland’s Seth Jarvis was selected by the Carolina Hurricanes in the 2020 NHL Draft’s first round. (Brian Liesse)

Locally, the US Divisions teams did well, highlighted by Portland Winterhawks star Seth Jarvis being the first WHL player chose. Jarvis went in the first round with pick 13 to the Carolina Hurricanes. He wasn’t the only Winterhawk who had his name called as Cross Hanas was selected by the Detroit Redwings at 55 and Tampa Bay took Jaydon Dureau with pick 147.

Gage Goncalves of the Everett Silvertips was a big riser, going to the Lightning with the last pick of the second round. The center exploded for 33 goals this past season after scoring once the year before and flew up the draft rankings. He was joined Wednesday by Everett teammates Kasper Puutio (153 to Florida) and Ronan Seeley (208 to Carolina).

Spokane’s Jack Finley was picked in the second round by the Lightning – Tampa Bay obviously scouted the US division – and Post Falls, Idaho product Bear Hughes was picked 148th by the Washington Capitals.

Defenseman Tyrel Bauer of the Seattle Thunderbirds was taken by the Winnipeg Jets with pick 164 and teammate Matthew Rempe was taken with the next pick by the New York Rangers.