2020 NHL Free Agency by the numbers 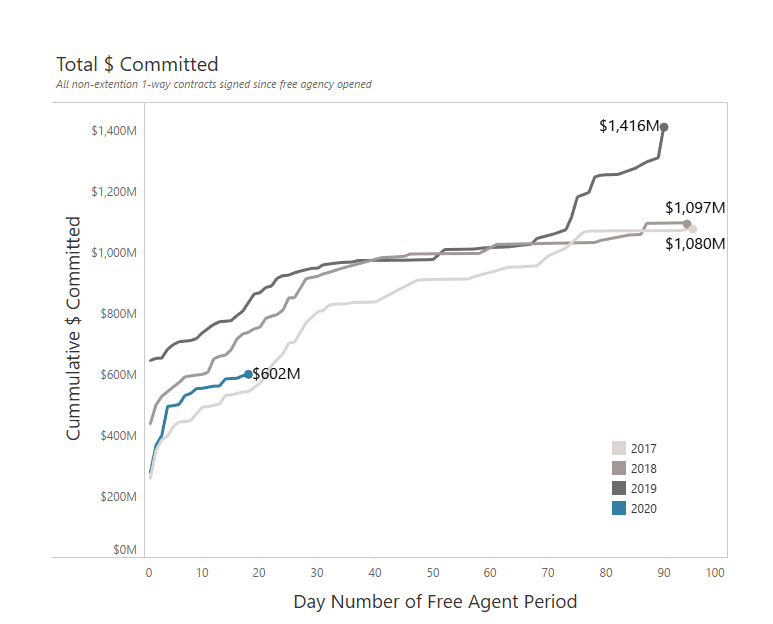 We’ve already talked about the impending cap crunch that most of the teams in the league will be facing. The impact has been very evident during the first 18 days of NHL Free Agency where the teams aren’t spending as much as they have in the past couple of years.

Here is the breakdown of the current dollars committed through day #18 of the free agent period and how it stacks up to the prior 3 years.

Of course, the total committed dollars is not the whole story. It’s also important to view the average annual value (Cap Hit) and average term of the contracts. Both are down double digits from last year at this point in time. Here is an interactive dashboard to let you explore the numbers by team.

So teams are signing roughly the same amount of players in the same timeframe, but signing them for less money and for shorter term deals.

And for the heck of it, here is a comparable to how each team is spending and the number of players they have signed this free agent period.

The shorter deals and cap crunch are all good news for the Kraken as they get ready for the Expansion Draft next summer. This won’t be a one-year trend as the cap is projected to stay flat next year as well due to lost revenue of partial season with optimistically, limited fans in the buildings.