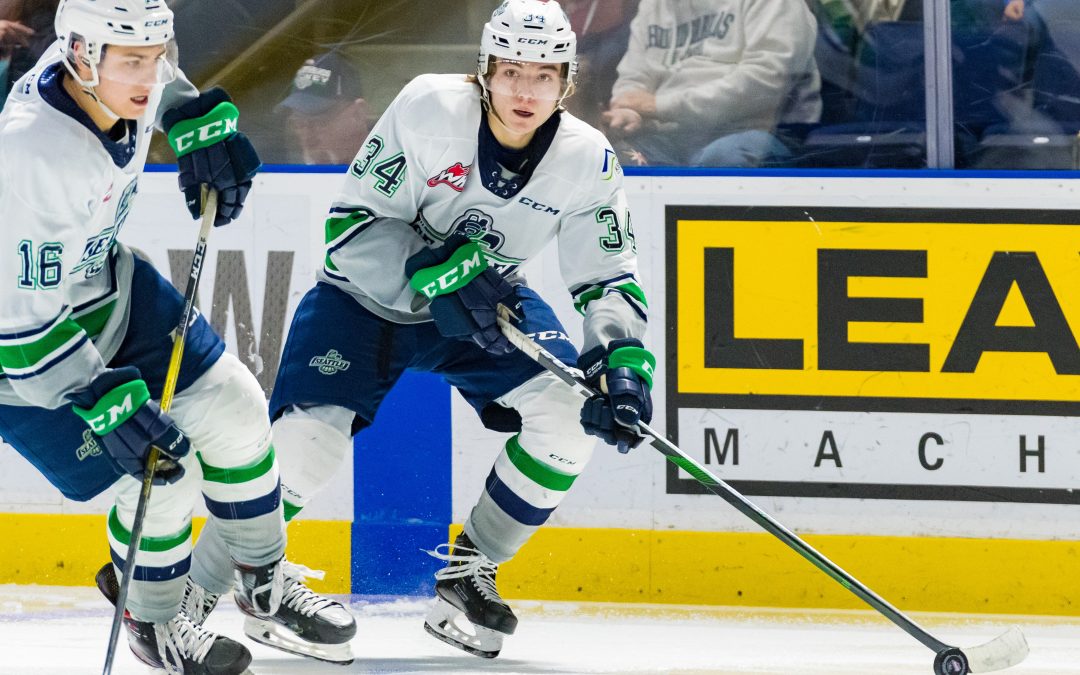 We don’t know when they’ll start playing, how many games they’ll play, or if they’ll finish the season but the time has come to look forward to the top 2021 NHL Draft prospects.

Why? Because it will be the first amateur draft that the Seattle Kraken takes part in.

Even though the various amateur leagues that feature prospects have tentative start dates, the Draft process started this week when NHL Central Scouting published its initial prospect watchlist for the 2021 Draft. The Draft usually happens in June but as with everything in the hockey world, that date is also tentative.

After the cancellation of the summer’s Hlinka-Gretzky tournament, the watchlist became the unofficial kick off to the prospect season. The NHL Central Scouting list should not be taken as gospel. It doesn’t reflect how the individual teams, including the Kraken, have prospects ranked but the list serves as a starting point as to who is on the radar.

It’s not known what slot the Kraken will get to pick in the first round next summer. Seattle will be in the Draft Lottery as the ‘third position’ team. That means there is a 10-percent chance that the Kraken will have their lottery ball land on the top pick. They’ll end up with at least the sixth pick – the Vegas Golden Knights had the sixth overall pick during their first draft and took Portland Winterhawks star Cody Glass.

Here is a rundown of some names to watch for both at the top of the draft as well as local players who may get drafted in 2021.

Not just a good name, Power has the potential to be a franchise-leading offensive defenseman. He’s listed at 6-foot-5 and is as strong as his name implies. Power spent the past two seasons in the USHL playing for the Chicago Steel and will now move on to Michigan. Last year he scored 12 times to go with 40 points in 45 games with the Steel. If he’s available when the Kraken pick it will be hard to pass.

Playing in Finland’s Liga, Karpat put up huge numbers with the U20 club during the 2018-2019 season (41 games, 17g-14a-31p) but fell off the pace some this past year. He did shine internationally for Finland both at the World Junior Championships and the U18 championships where he recorded nine points in as many games. Reportedly is a strong stick-handling, all-round center prospect which every budding NHL franchise could use.

While not as physically impressive as Power, Clarke may be the most skilled blueliner available in 2021. As a 16-year-old rookie in the always tough OHL last year, he picked up 38 points and that points-per-game number should soar higher this coming season. He’s loaded with speed, pushes the pace and a power-play quarterback. Clarke would be another strong candidate to man the Kraken blueline.

If you like goal scorers then Lucius, who is from Minnesota, is your guy. He found the back of the net 31 times for the U17 USA team, along with 50 points, in 46 games last season. Lucius can shoot and score from anywhere on the ice. He’s played both center and wing which brings some versatility to his game. Committed to the University of Minnesota, his CHL rights are held by the Portland Winterhawks who selected him in the 2018 WHL Bantam Draft but it’s unlikely he’ll play there.

Following the profiles of his older brothers Jack (New Jersey Devils) and Quinn (Vancouver Canucks), Luke Hughes is slight of frame but a dynamic skater. He’ll go early in the draft and is a puck moving defenseman looking to have a big year with the NTDP this season. Will Seattle make it two Hughes brothers playing in the Northwest?

Johnson joins what should be a stacked Michigan team this season and will be an intriguing prospect for Seattle to consider, if he’s available. He plays center, which is a valuable position, is from North Vancouver, and is a dynamic scorer. Using his quickness and speed he posted video game like numbers (41 goals, 60 assists, 101 points in 52 games) with the BCHL’s Trail Smoke Eaters last year. If the NCAA can get a season in this year, he’ll get a chance to showcase himself against older players, which would help his stock rise.

Kent Johnson has hit 100 points in the BCHL at 17. An electrifying talent, Johnson has a ridiculous skill and IQ level that outclasses all of the BCHL. He’ll be off to the Univ of Michigan for his draft year next season.

The WHL had 56 players selected over the last two NHL Drafts and were represented on the Central Scouting list with 36 ranked players.

Seeing all 36 will be tough for Northwest hockey fans as the league’s return to play plan will limit play to an intra-division schedule. The five U.S. Division clubs each had at least one player ranked on the watchlist so there will be plenty of 2021 prospects to watch – assuming fans are let in the building at some point during the season.

The Silvertips have been producing a slew of defenders drawing NHL attention of late and Zellweger is the latest. Had a strong 16-year-old rookie campaign last year and with some graduation on the Silvertips back end he will take on a more elevated role for Everett this coming season.

After putting up ridiculous numbers on his way to Portland, O’Brien was impressive in his rookie year this past season. Playing behind some experienced, and talented, forwards, he still managed to pot 14 goals in 55 games. The six-foot center from Denver adds to an already stacked top six in Portland and it wouldn’t be surprising if he sneaks into the first round of the draft.

A player who very well may end up playing with O’Brien, Knack was another strong looking Portland rookie last year – making it clear why the Winerhawks ended up with the top record in the WHL. Coming over from Switzerland, Knak adjusted to the North American game nicely.

Like his fellow rookies last year, Kozak helped the Winterhawks lead the league a year early than prognosticators assumed they would contend. Kozak gave the Winterhawks forward depth and will rise up the ranks of their forward group this year.

There was a great deal of excitement in Seattle after the Thunderbirds drafted the high-scoring Roulette in 2018. Coming up in Winnipeg he broke several scoring records held by Jonathan Toews, which is impressive. He lived up to the hype, transitioning the tougher WHL level for the Thunderbirds at 16-years-old. Roulette earned a spot on Seattle’s top line, playing against hard matchups with older players and still scored 19 goals. He is a creative offensive player and can score in a number of ways.

With appropriate credit to @ThomBeuning – "SPIN THAT WHEEL!"@SeattleTbirds forward Conner Roulette is atop the @NHLCentralScout watch list. #NHLDraft

Seattle’s first-round pick in 2018 is a two-way center who already has established himself as a top notch penalty killer. He could get a shot in the Thunderbirds top six this year which should present himself with an opportunity to increase his offensive output.

Ciona already has the size – listed at 6-foot-2 and 200 pounds – and is one of the strongest players in the WHL. Like Uchacz, he’ll get more opportunity this year to score. Look for him to be deployed by head coach Matt O’Dette in all scenarios as he has the potential to be a strong net front player on the Seattle power play.

A two-way defenseman, Sward is another player who will get more ice time this season. He had a good rookie year with 17 points for the Chiefs. Sward scored a goal in his WHL debut at just 15-years-old during the 2018-2019 season during a brief call up.

Playing behind a young, inexperienced, and rebuilding Americans squad, Boyko’s numbers don’t jump off the page at you. Playing goalie in the WHL at 16 is tough enough and the combination led to crooked numbers. Boyko played better than those numbers say he did and at 6-foot-8, he’ll get looks from NHL scouts.

One of the young players in front of Boyko, Lajoie is an NHL-sized defenseman who showed some offensive potential last year. At 6-foot-4, he popped eight goals and that comes after some monster point totals coming up through Bantam and Midget hockey.