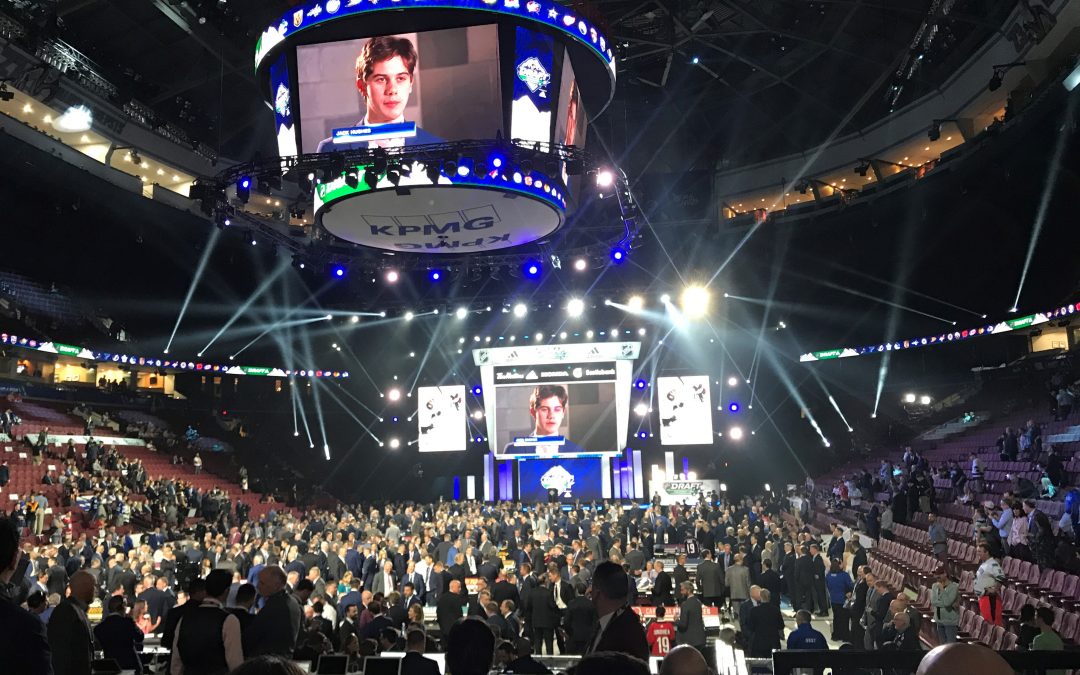 Dylan Guenther of the WHL’s Edmonton Oil Kings found himself rated as a potential first-round pick for the 2021 NHL Draft when the league’s Central Scouting initial watchlist was published two weeks ago. This past weekend he was suited up for the Sherwood Park Crusaders as they visited the Spruce Grove Saints in an Alberta Junior Hockey League preseason game. He scored twice in an overtime win.

With two of the three major junior leagues yet to start play, Guenther is one of several Draft prospects who have been loaned to junior A teams such as Sherwood Park. The games with Spruce Grove featured four 2021 Draft potentials as the state of amateur hockey is in flux due to the COVID pandemic.

The amateur scouting season this year will be like no other in the past.

Prospects are scattered throughout the lower level leagues and across Europe. How many games they will play is a great unknown and presenting a unique situation for NHL scouts.

That includes the newly hired Seattle Kraken amateur scouts who will be tasked with trying to get as many viewings as possible this coming season. Its not an ideal situation for a franchise’s first Draft but its one that the Kraken will have to navigate.

Scouting the 2021 NHL Draft is going to be a challenge for the Kraken and it’s an important one to conquer.

With many amateur leagues delaying their start dates or, in the case of the QMJHL, having to postpone or drop games due to positive cases, its unclear how many viewings NHL teams are going to get on potential Draft prospects.

To take on that challenge, Seattle announced the hiring of a dozen amateur scouts to start the process.

Originally, the plan was to hire scouts this past summer, in time for the annual Hlinka-Gretzky tournament in August. That tournament is often referred to as the start of the prospect season as it’s an international event with the top draft-eligible players in the world on the ice.

The Hlinka-Gretzky event was ultimately cancelled due to the pandemic which meant that Seattle held off on hiring scouts. They read and reacted.

With leagues slowly starting to play, the time to get scouts in rinks is now.

GM @RonFrancis10 announces the hiring of Robert Kron as director of amateur scouting along with 11 amateur and European scouts as the #SeaKraken prepare for the 2021 @NHL Entry Draft.

Welcome to the newest additions to the scouting staff → https://t.co/S1mAgC3j7x pic.twitter.com/rjJMQXxWKq

“We’re right into the trenches right now,” Olczyk says. “We have been, and we’ll continue to begin to monitor these players. We’re going to have limited viewings or no viewings in some circumstances based on the leagues. Regardless, we’re going to be prepared as best we can.”

Heading up the scouting charge is Robert Kron who is the new head of amateur scouting for the club. Kron has experience scouting, something he’s done for over a decade and he knows hockey, having played 771 NHL games with Vancouver, Hartford, Carolina, and Columbus.

He most recently was scouting European players for the Hurricanes which makes him familiar to the Seattle brain trust.

“We have a relationship with Robert,” Olczyk, who along with Ron Francis worked with Kron in Carolina, says. “We have a certain comfort level with him. We’re hiring a person who will lead our draft table and has an ability to recognize high end talent. We’re confident in his abilities.”

Kron will run the day-to-day activities of the scouting department and will meet regularly with Francis and Olczyk on the prospect list. It’s a list that doesn’t have any names on it yet as the Kraken did not get a lot of viewings last season.

That may seem like it puts the Kraken at a disadvantage, but it won’t be a big one.

The established NHL teams had multiple scouts at amateur games last season, but their focus was on the 2020 pool. They certainly saw this year’s prospects play but did not give them proper scrutiny and a player’s stock can rise, or fall, from a 16-year-old campaign to their draft year the following season.

“These are critical growing years,” Olczyk says. “A perfect scenario is we see them at Hlinka in July or August and then you see the same players later in April or May to see how they develop. Anytime you can view players it’s a positive and that’s an advantage. You can see if they develop, are ascending, or on the decline.

“Last year, Ron and I were out at rinks so we can start gathering that information. We’re starting from scratch with no players in the data base.”

Building a data base can now begin.

The challenge of live viewings

Seeing the players is going to be hard and look different for scouts this season.

In October’s NHL Draft, the Ontario Hockey League and the Western Hockey League led the way with a combination of 59 players selected. The two junior leagues are perennial prospect factories but neither has played a game yet this season.

The third major-junior circuit, the QMJHL, has started but due to COVID outbreaks in Quebec has had repeated stops, cancellations, and postponements. In the United States, the USHL was prepared to start Thursday but opening night has already been postponed for virus reasons. The NCAA is set to begin in November as well.

In Europe, most leagues have started and underway and have many prospects worth scouting. Four of the Kraken scouts hired will be based in Europe to provide coverage there.

The two big leagues in North America? The WHL is set to start on January 8th – the league is saying it’s a firm start date – and the OHL is planning a 40-game schedule to start on February 4th but is being pressured by local health authorities to do so without body checking.

As the pandemic surges on, its unknown if those leagues can hit those dates or how long they’ll play.

“This is a Herculean task and there’s a lot of challenges,” Olczyk says. “We’re not going to make excuses…we’re going to be exposed to limited or potentially no viewings of players when we select in our first draft. It’s an added layer but we’ll be ready as best we can.”

Once every league is up and running the question remains whether scouts will be allowed into the building.

The 2021 World Junior Championships in Edmonton have stated they will be using the same bubble system that the NHL did, which means no scouts in the building. The jury is still out on leagues like the OHL and WHL.

It may come down to individual jurisdictions and the local health authorities which could mean some buildings accessible while others aren’t.

The Kraken may have to rely on more video scouting than normal to get a look at prospects and Zoom calls to talk to the players and coaches for more information gathering. That will help but a lot of nuance is missed on video.

How players react and how they anticipate plays can be missed as the camera follows the puck and scouts won’t see what the player is up to away from it. On top of that, anyone who has watched junior games via online video feed are aware the quality varies greatly from rink to rink.

“There’s no substitute for live viewings,” Olczyk says. “Something is always better than nothing so (having video) is a plus. It’s certainly a challenge as we move forward.”

Yet another challenge is judging a player like Guenther and how his play is affected by playing in a lower level. He looked dominant in his first two AJHL games, but would he look that way in the WHL?

Edmonton Oil Kings star Dylan Guenther is a top 2021 prospect and currently playing in Junior A.

Maybe, he did score 26 goals and 59 points last year as a 16-year-old and common sense says he would improve on those numbers a year older. Olczyk says that there are still things to learn about a player, even if they are playing junior ‘A’ instead of the WHL.

“It’s one of the many challenges of amateur scouting,” he says. “You’re projecting two, three, four, five years down the road. Has he got incredible hands, incredible vision, can he skate really well? The competition that they’re playing and the situation, you can look at the compete, there’s a lot of variables that you can see in a game setting. It’s a lot of fun and it’s a challenge and I know our guys love to do it.”

Loving the gig will be key for the Kraken scouts.

Scouting this season will certainly have its share of frustrations and setbacks as games get canceled or rescheduled. Rather than watching from the corner of the arena, the scouts may have to squint at a grainy video feed on a laptop.

The task is hard but one that can pay dividends down the road. Despite all the attention the 2021 expansion draft gets, the club’s future depends on how well Kron, Olczyk, Francis, and the team of scouts do in the amateur draft.

“I think the Draft is the foundation that is going to impact our future for years to come,” Olczyk adds. “We’ll deal with these challenges and obstacles in our way.”

Setting that foundation will require a good deal of reading and reacting.