And the Winner Is: Handing Out Awards for the NHL’s Reverse Retro Jerseys 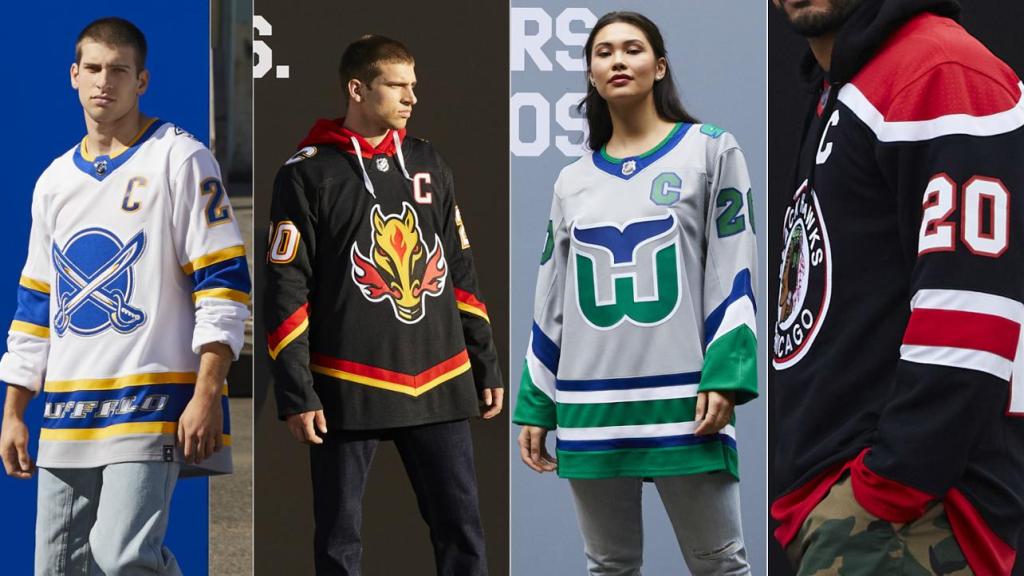 Has life felt less colorful lately? The NHL has you covered. In a moment the league claims you all have been waiting for, it released the Reverse Retro Jerseys by Adidas collection Monday morning. All 31 existing teams revealed reimagined jersey designs that highlighted a minor color in their scheme, a throwback to an old logo, or both.

The moment you've been waiting for!

Check out these beautiful #ReverseRetro jerseys by @adidashockey ⬇️ pic.twitter.com/V9RBDOxM6C

Some were great. Some left a lot to be desired. There are many rankings for you to mull over but we’re going to go a different route here. We are handing out Sound Of Hockey Awards for the new looks. These awards went through an extensive review process and the results have been certified by, well, nobody.

Here are your first ever Sound Of Hockey Reverse Retro Awards:

What the Wild did was brilliant and simple. They took their current logo – which is a bear… or a cougar… or a lion… or… something… in case you didn’t know – and placed it in the old style of a North Stars jersey. Green and gold is a combo we don’t have enough of in the NHL, and Minnesota brought it back. This look is so good that it wouldn’t be the worst thing if the Wild made this their regular look. Somewhere, Neal Broten is smiling.

**Editor’s Note: Sound Of Hockey’s Darren Brown had nothing to do with the selection of this award, and does NOT want to hear about this from readers or listeners of the Sound Of Hockey Podcast.**

The “I Don’t Think You Understood The Concept” Award

Lou: all of this is way too flashy for my taste

Adidas: [copy pastes regular Islanders jerseys] what about this one?

These new jerseys are, um, the same? The blue may be darker, but this is essentially no different than the current Islanders’ jersey. For a team that was criticized in the playoffs for not playing an exciting style of hockey, these jerseys are very much on brand. Why not orange? Why not bring back that goofy fisherman? New York had a chance to go bold and instead they dumped and chased.

The Best “Nod To History” Award

Raise a hand if you already preordered!

By far the toughest to choose of all the categories of Reverse Retro Jerseys awards. The Hurricanes brought back the Whalers logos only with a grey color rather than green and it looks great. In Los Angeles, the Kings combined the purple and gold – which they should use as their regular jerseys – but with the Gretzky-era logo for a clean, new look.

But, the Avalanche brought back the Quebec Nordiques…whatever that logo is. **Editor’s Note: It’s an igloo, Andy.** Apparently there’s an ‘N’ in there, but it doesn’t matter. **Editor’s Note: It’s a lowercase ‘n’, and it’s actually quite obvious.** Adding that thing, along with the fleur de lis along the bottom, they’ve recreated the old Quebec look, only in Colorado colors. It’s unique, slick, and will sell better than tickets at the old Colisée de Québec. Even Eric Lindros would put these beauties on.

The Best Use Of Reverse Colors Award

The Arizona Coyotes reverse retro jersey has been unveiled. pic.twitter.com/l1QVLgjIw8

With a two-toned Coyote head, a robust purple color, and sneaking of the moon sliver into the desert landscape at the bottom, the Coyotes have a winner. The purple jumps out at you and somehow works well with the tan. The only thing that would have made this better is if they went with the full Kachina Coyote instead of just the head. These are so slick that they almost make you want to take part in an illegal prospect workout.

The “Are Those Your Practice Jerseys?” Award

Is Steve Yzerman a minimalist? The Red Wings Reverse Retro jerseys feature the legendary winged wheel logo on white, and not much else. The logo and numbers are the only places you’ll find red. Gone are any red stripes or piping, and only one dull, grey stripe was added. If you slap a Little Caesar’s patch on it, you’ve got a slick practice jersey. The Red Wings were a bad hockey team last year, but that doesn’t mean they have to look terrible too.

The Best Use Of Green Award

We love the color green. Green needs to be in the NHL more. The Devils get it and they reversed their jerseys making dark green the main color. The red and white stripes on the sleeves are a great companion, and these jerseys look sweet. Another team that should perhaps consider making these their regular, everyday jersey.

Well, if you looked up “Reverse Retro Jerseys” in the dictionary, you’d probably see this.

Wild Wing is back, only in a less colorful fashion than we’ve seen him before. Anaheim has busted out Wild Wing in the past, only with a teal backdrop. This time around, the Ducks have reversed – following directions – the color, and now it’s a white backdrop with a teal bottom stripe. Some people love Wild Wing, despite how busy of a logo it is, but with the white in the background, this looks like an unfinished painting from one of Walt Disney’s most junior animators.

And the Winner Is…

You may recall that over the summer, the Washington R-Words finally dropped their incredibly racist nickname to temporarily become the Washington Football Team. Well, in the wake of that decision, the microscope of public perception shifted briefly to the Blackhawks, who opted to stand behind their name, claiming the “name and logo symbolizes an important and historic person, Black Hawk of Illinois’ Sac & Fox Nation, whose leadership and life has inspired generations of Native Americans, veterans and the public.”

BUT… don’t we find it a bit curious that in the first set of releases for Chicago’s Reverse Retro jersey entry… there doesn’t seem to be a picture of the front of the jersey? Watch the video in the below tweet. There’s some obviously intentional covering of the logo happening here.

Crafted for the Windy City.

Further solidifying the point, the official NHL Twitter account made a thread of every team’s release early on Monday morning. 30 of the tweets featured clear images of the front of each respective team’s new jersey. Then they landed on Chicago (Carolina included for comparison).

Clearly, somebody is a bit concerned about the public’s reaction to the team releasing yet another jersey with the controversial logo on the front. Thus, the Blackhawks have been handed the “Oh, For Shame!” Award.

The “You Copied Us So We’ll Copy You” Award

The Canadiens' adidas #ReverseRetro jersey is inspired by the color that marked the team's first sweater in 1909.

These are nice, and Montreal obviously understood the concept. They replaced the red in their home jerseys with blue and it works. Those of us in the Northwest know it works since the Spokane Chiefs have worn the same jerseys as a third sweater for years now. Yes, Spokane copies Montreal’s colors and jersey design, but the Chiefs took to wearing blue alternates long before Reverse Retro was an idea.

This is allowable since Spokane borrowed from Montreal first. They do look nice in action, though.

Check out all the other great Sound Of Hockey content by clicking here!