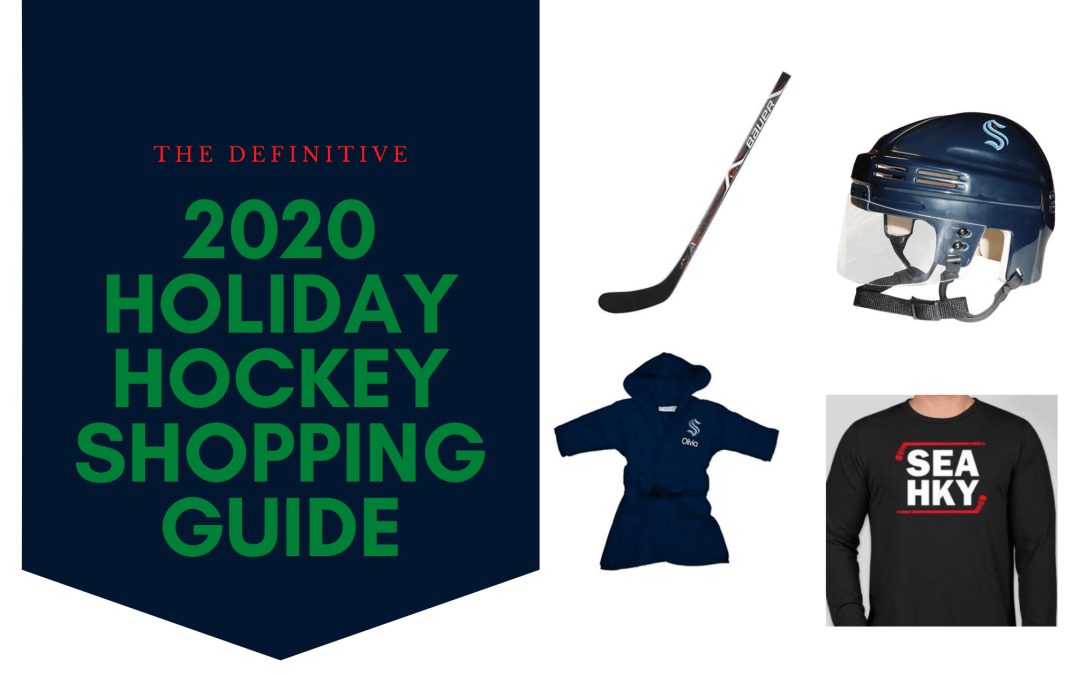 It’s the holiday season, so hoop dee doo and dickory dock. Don’t forget to purchase some socks. Welcome to the Seattle Hockey Shopping Guide, presented by the very good people at Sound Of Hockey.

If you’re reading this, it means you did not get trampled trying to get your hands on the same off-brand TV that is available for purchase all year round at your local Wal-Mart, so kudos to you! Although having said that, with Covid raging across America, getting trampled at a Wal-Mart was probably a bit less likely on the 2020 version of Black Friday, so with that in mind, your kudos have been revoked.

BUT! You get those kudos back again because you’re here reading this definitive guide to holiday shopping for the hockey fan in your life, regardless of if they are the most seasoned of puck watchers/players or just picking up the game for the first time.

This Seattle hockey shopping guide may not be the result of hours of scientifically crafted market research, but rest assured that the writer of this article knows a thing or two about receiving hockey gifts. He also knows which hockey gifts he would like to receive this year, so if you’re looking for something special to get him, you can choose pretty much anything from the list below. (Well, you can get him anything except the baby robe. The author of this article would have no use for a baby-sized robe.)

Mini hockey, knee hockey, mini sticks, whatever you want to call it, it’s great. Like all things in hockey, though, the technology has improved dramatically in the last twenty years.

Gone are the days of the little plastic paddles, emblazoned with team logos, that more closely resembled fly swatters more than they did useful pieces of hockey equipment. Here are the days of the perfect replica one-piece composite sticks designed for peak knee-hockey performance.

These bad boys have specific right- or left-hand curves, graphics and specs that match the full-size versions, and a level of quality that for just $30, your little tyke will think you (or Santa) really splurged.

The version we’ve chosen here is a Bauer-branded stick, but every popular stick manufacturer sells these for about the same price.

**A quick personal story from the author** I coached a squirt team in Coney Island, New York one season. We did a few out-of-town tournaments, and knee hockey was omni-present at the hotels amongst the kids. When they hit their curfew, we coaches would send the kids to bed, but make them leave behind their knee-hockey sticks. Then it was parents versus coaches in a no-holds-barred fight to the mini-hockey death that resulted in bruised knuckles, rug burns on every inch of our respective bodies, and multiple calls from the front desk asking us to keep it down at 4AM. I’m telling you, knee hockey is for everyone.

For the Passionate Hockey Player

The beauty of this game is that not only is it extremely fun and can be played anywhere, but it also improves your ability to handle the puck and drop it on your teammate’s stick from afar. This is the most costly item in our guide, but we think it’s worth the pennies and your hockey player will love it.

When the receiver of this gift gets back on the ice, he or she will be serving up the spiciest of sauce.

For the New Lover of All Things Kraken

If you want it with a Kraken logo, you can find it on the Fanatics website.

From office décor to pajama pants, this website has it all, so a new-found love of the Seattle Kraken can always be put on display.

As far as what specifically to buy off the site, well, let’s just say that if you buy your new lover of all things Kraken *anything* with a Kraken logo on it, they will like it, because their logos are incredible.

Look at this neat little helmet!

Here are a few of our other favorites:

For the Brand-New Hockey Fan

THE PERSONALIZED BABY KRAKEN ROBE! As long as we’re at the Fanatics site anyway, we wanted to make sure you knew about this insanely cute robe for the newest of hockey fans out there. The infant in your family will not look more adorable than he or she does when he or she gets out of the bath and throws on this cuddly little number.

**A quick personal story from the author** My wife and I bought this as a baby gift for our friends who are new parents, and we can confirm that said baby looks incredibly cute when wearing this robe.

For the Next Cammi Granato

The NWHL has had an interesting couple of years, but there is some fantastic hockey that gets played in that league. They’re also going to be playing their upcoming season in a super-short bubble format at the end of January in Lake Placid. So, here’s a great opportunity for the hockey fan in your life to rep his or her favorite women’s team.

Four of the six member teams – the Buffalo Beauts, Metropolitan Riveters, Connecticut Whale, and Minnesota Whitecaps – are now selling shirseys of all their players, and they are awesome.

Help the next Cammi Granato in your life find a role model. At $25, you can’t go wrong here.

For the Old Hoser

Those that know will know. Basically, if you have a hockey lover in your life that has played or watched the game with any kind of consistency since… say… the 90’s, you can pretty much buy them anything off the Koho Pro Shop site and they will think you’re the coolest.

Koho, Jofa, and Heaton (Heaton made goalie gear only) are all defunct equipment manufacturers that once outfitted everyone who was anyone in the NHL from Peter Forsberg to Martin Brodeur.

By the way, if you have a goalie in your life, they will love you forever if you buy them this hat.

For the Student of the Game

Why not consider gifting a good book?

**A quick personal note from the author** I haven’t read a hockey-specific book in a LONG time, so I enlisted the help of John Barr and Andy Eide on this one.

The Down Goes Brown History of the NHL by friend of the Sound Of Hockey Podcast, Sean McIndoe.

It’s a fun read that will take you through the most bizarre stories rarely told in the NHL. There are so many comedic nuggets in this league’s history, it is your duty to read this book and share with the masses. You will read about earmuffs, how the Black Hawks became the Blackhawks, the true humorous origins of the NHL, and many many more stories that you will be telling for years. – John Barr

Hockey Plays and Strategies by Mike Johnston and Ryan Walter.

Whether you’re new to the game or a lifelong fan, ‘Hockey Plays and Strategies’ is for you. It dives into explaining the swirling chaos on the ice, which will change the way you watch the game.

The two authors are experienced hockey guys and each has a Northwest connection. Ryan Walter scored 54 goals for the inaugural Seattle Breakers club in 1977 and would go on to play 1000 NHL games. Mike Johnston serves as head coach, general manager, and president of the WHL’s Portland Winterhawks, and has turned them into one of the most consistent junior franchises in North American hockey. – Andy Eide

For All Hockey Fans Everywhere

SOUND OF HOCKEY MERCH! The Seattle hockey shopping guide obviously would not be complete if we didn’t include our beautiful new threads, available now in the SOH store.

What’s not to like? Seattle references, shopping local, cool style, and the shirts are super soft and comfortable. It’s win-win-win all the way around!

This concludes Sound Of Hockey’s 2020 Seattle Hockey Shopping Guide. May the odds be ever in your favor.