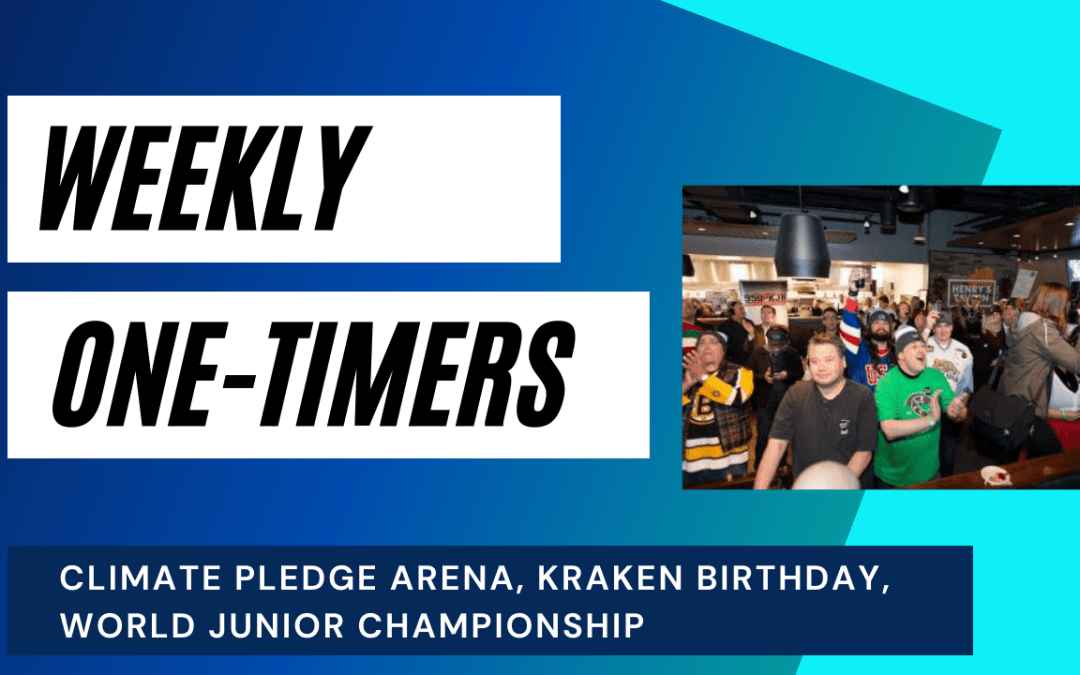 It feels like a lifetime – because time has become a flat circle – but in reality, it was just two December 4th’s ago when hundreds of hockey fans packed into Henry’s Tavern in South Lake Union neighborhood of Seattle. It was early in the morning and it was cold, but the excitement and free “Return to Hockey” beanies kept everyone warm.

December 4th, 2018 was the date that NHL commissioner Gary Bettman made it official. Seattle was getting an NHL franchise.

It was a while before the team would be named the Kraken, but on that day, the NHL Seattle organization announced itself to the broader sporting world, and Seattle indicated that it was ready to become a hockey city.

What a memorable day that was.

The Seattle Kraken organization celebrated its second birthday Friday by officially changing its Twitter handle from the awkward @NHLSeattle_ to the more natural @SeattleKraken. Oh, and they got one of those cakes that doesn’t look like a cake until somebody cuts into it.

The change in Twitter handle wasn’t the only new moniker visible in Krakenworld this week.

On Saturday, two guys apparently named Scott and Doug were busy airlifting new Climate Pledge Arena signage to the apex of the historic roof of the Seattle Center venue.

Also this week, Chris Daniels of King 5 got a stunning virtual reality tour of how the finished Climate Pledge Arena will look.

This is definitely worth your time.

Oh, how quickly things can change.

After the hockey world collectively freaked out over the NHL and NHLPA allegedly not talking to each other during [checks notes] Thanksgiving week, it appears things are looking up on a return to play plan. Earlier this week, Elliotte Friedman broke down what he was hearing on the latest movement on the NHL’s plan.

As the saying goes, Keep Calm and Carry On.

The less we hear about this the better because it would indicate that both sides are talking with each other instead of trying to negotiate in public. Signs are indicating that there could be a deal in the next week.

Prior to the abbreviated NHL season, we are expecting to see the World Junior Championship played in an Edmonton bubble beginning on Christmas Day and running through January 5th.

With the delay to the season, many in the hockey world were hoping to see some of the NHL players that are still young enough for the WJC take part in the tournament. Chicago’s Kirby Dach, for example, participated in Canada’s selection camp, and is expected to play a huge role for his country. Dach looked like a man amongst boys in Red/White scrimmages.

On the flip side, 2019’s No. 1 overall Draft pick, Jack Hughes, will not be released by the New Jersey Devils to play for Team USA, and the New York Rangers also announced this week that they will not allow Alexis Lafreniere to take part. Nick Robertson will be allowed by the Toronto Maple Leafs to participate if NHL Training Camps have not yet started.

Here’s an interesting item to keep an eye on over the next few days, as per Best Friend of the Pod, Chris Peters:

Nick Cotsonika from NHL.com broke down all the progress since Seattle was awarded a franchise two years ago.

King 5 News reported on how the current state of the pandemic is impacting the local hockey rinks. Spoiler: It’s not good.

Greg Wyshynski from ESPN+ (paywall) had a great column on the Angry Beaver’s roller coaster ride and the dire straits the bar is in now.

Seattle Women’s Hockey Club (a wonderful organization that has been growing and fostering hockey for a long time in the region) launched their annual fundraiser auction with plenty of items for hockey fans (pssst…there are deals to be had here).

NCHC started back up this week in an Omaha-based bubble, and Friday’s game featuring #1-ranked North Dakota vs #4 Denver was a real barnburner. The back-and-forth battle ended with this banger of a game winner by UND’s Jordan Kawaguchi.

Also in the NCHC bubble, this happened:

The Vancouver Sun published a story that long-time Canucks anthem singer, Mark Donnelly, was planning to sing O Canada at a rally against Covid-19 restrictions.

Canucks owner, Francesco Aquilini, quickly made it clear that he did not agree with Donnelly’s decision to support such an event. Aquilini apparently canned the tenor via social media with a single re-tweet of the Vancouver Sun’s story.

While we certainly don’t agree with Donnelly’s stance on wearing masks (or… apparently… not wearing masks), we will forever be grateful to him for giving us one of the funniest hockey videos of all time.