Splitting Up Your Kraken Season Tickets 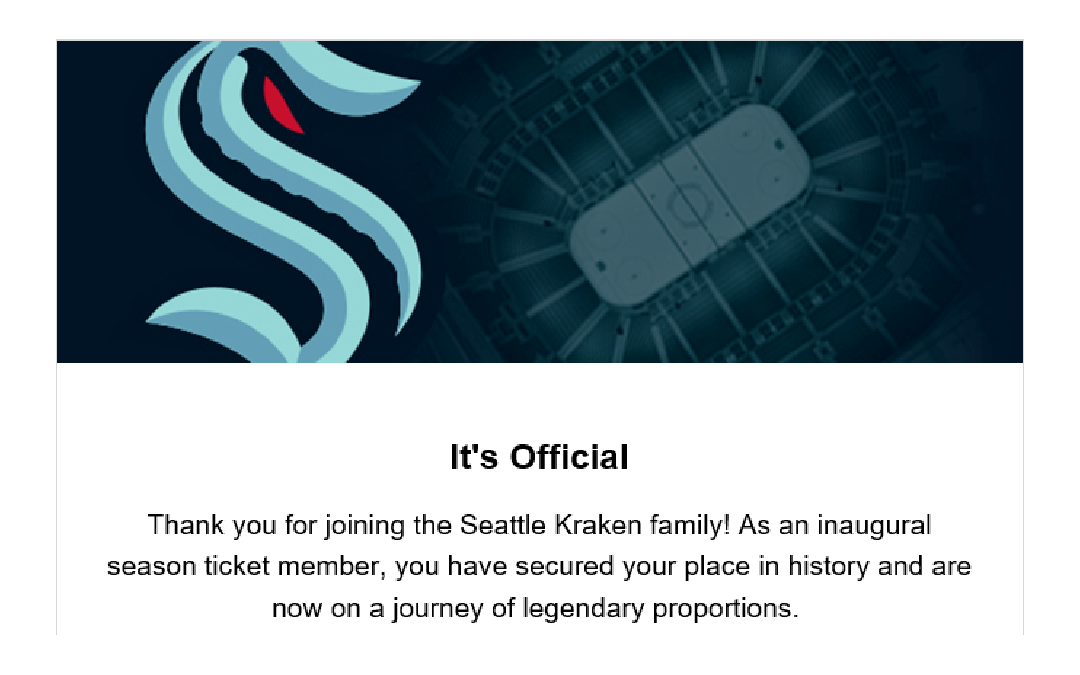 You did it! You and three of your buddies landed two full-season ticket packages to split for the Seattle Kraken’s inaugural season. But have you thought about exactly how you’re going to split your coveted Kraken season tickets?

If you are like me, then you have literally dreamed of this moment. You think about having the opportunity of seeing Connor McDavid, your childhood team, or maybe just being there on Opening Night. You then realize that you only get 11 of the 44 home games and wonder how you are going to distribute the tickets among your group.

Picking games and tickets should be considered a fun exercise and an excuse to get the group together for a few college sodas before the 2021-22 season begins. There are several approaches and strategies for sharing tickets that I have thought about. Here are some of them.

I’ve created a scenario of my own here. Obviously, this will have to be altered depending on your situation and your own Kraken season tickets group.

You have four people in your group sharing two full-season ticket packages. Each person gets two tickets for 11 games and for simplicity, face value of the tickets costs $100 per seat per game. Three of the four people have a hometown team that up until the arrival of the Seattle Kraken was their favorite team. Financially, everyone is stable, but one person has more stability than the others.

Here’s where your options come in for splitting up your Kraken season tickets. I definitely recommend that no matter which route you take, treating this like a real NHL Draft, with a spokesperson who serves as “Commissioner,” a make-shift podium, and a physical draft board that will keep everyone abreast as to what games remain for selection. I would also recommend that all attendees consistently boo whichever individual serves as Commissioner to keep up the image of a real draft.

You could keep it very simple and treat it as a Conventional Draft.

This is a simple, straight-forward process, exactly as we know it. Draft order of people in your group would be selected by picking numbers out of a hat or a random number generator system of your choice. Once the order is set, then that is the order in which you will complete the draft. So #1 selects one game of their choice from any game of the season, #2 selects one game of their choice, then #3 and #4, and then back to #1 for the fifth selection, and so on.

Pros: Seems relatively fair and priority order is random. Simple to pull off and simple to manage.

Cons: Person who selects fourth might feel a bit cheated since they would pick fourth and eight, giving them limited options to pick the premium games (i.e. Original Six – if you are into that – contending teams, or opponents with the biggest superstars). This would also be the least fun approach to ticket selection.

Cons: Like the Conventional Draft, we can make this way more interesting and fun than this, especially when factoring in college sodas.

In the Ticket Auction, based on the Fantasy Auction model, different games have different values to people. It could be the matchup, the time of year, the day of week, etc. Why not allow everyone to bid on the games about which they care the most?

You could give everyone 1000 fictitious points/dollars to bid out on all 44 games. You could do this blind where everyone fills in a separate spreadsheet before selection night. They need to put at least one point on each game and a maximum of 957 bucks on any one game (1000 – 43 = 957 to factor in the minimum bid required on the other games). On selection night, you can get together and compile the results to determine who goes to each game, starting with the highest individual point bid.

Before selection night group member’s bids are consolidated by the Commissioner, who will again be booed relentlessly throughout the gathering.

On selection night the consolidated list is shared and the winner of each game is determined by the highest bidder.

Pros: Builds a system around how people value each game. It is more compelling and fun than a draft.

Cons: More complicated to organize. Tiebreakers may be needed. You would also need to ensure that each person still gets 11 games. Also, there is no going to the podium to announce your pick on this, rather the Commissioner going game-by-game through the schedule and announcing winners.

This is a combination of a real money live auction and a draft of your Kraken season tickets.

Second step would be to hold the live auction of the priority games. This would be with real money. Any funds collected above face value will then be redistributed to the people that did not win the auction for the tickets. For example, Jerry really wants Opening Night and he bids $300 over the face value of the ticket ($400/ticket X 2 tickets) which no one else in the group is able to beat. The $600 ($300 X 2 tickets) that is over the face value of the tickets means each other member of the group will get $200. With multiple people and multiple tickets, this could get a bit complicated. Someone with an eye for basic accounting or spreadsheet skills may be needed here.

Third step is to perform a draft (conventional or snake, as described earlier) for the remaining seats that were not part of the auction. If anyone won tickets in the auction, those tickets would apply to the 11 games each person is allowed to ensure an even distribution of games. Auction winners would sacrifice picks from the end of the draft once they’ve hit 11 total games.

Pros: It’s a fun and exciting event with your group to have over college sodas. Puts a dollar amount on the value of each game. Creates a fair market. People that lose out on games they want may get compensated.

Cons: Could create an unfair advantage for people who have more financial means to pay for the premium games. Complicated to manage.

It is also important to set some guidelines and rules of the group that are considered and ratified before tickets are selected. These should be maintained and updated from season to season.

Commissioner – In addition to announcing picks or auction wins and getting booed, the Commissioner will have some additional responsibilities. The commissioner will pull all the feedback from people in your group, help the group decide on the methodology of how the tickets will be distributed, make sure that the rules agreed upon by the group are abided by, and then lead the execution of the methodology.

You can also divide these tasks up further where you have a “Judge” who is responsible for the rules and a “Commissioner” responsible for managing the methodology and execution.

Resell – How does your group want to handle reselling of your Kraken season tickets? Is it wide open where people can sell their tickets to anyone at any time? Maybe people inside the group have the first right of refusal at face value or highest bidder? Should resell be allowed for Opening Night tickets? Is there profit distribution if the tickets are sold to someone outside of the group?

Playoffs – How should the order be considered for playoffs? Maybe reverse order of regular season draft should be considered. Selection should be which game in the series. What happens when a series ends shorter than what was selected i.e. series ends at 4 games? What happens to those that selected games 5, 6, or 7 in the series? If the Kraken moves onto the next series, then maybe the previous series defines the draft order of the games in the next series. If the Kraken did not move on, then it should define how next season’s draft should be ordered. Should resell be allowed for playoff tickets?

What Do You Think?

What are your ideas and considerations when allocating Kraken season tickets?