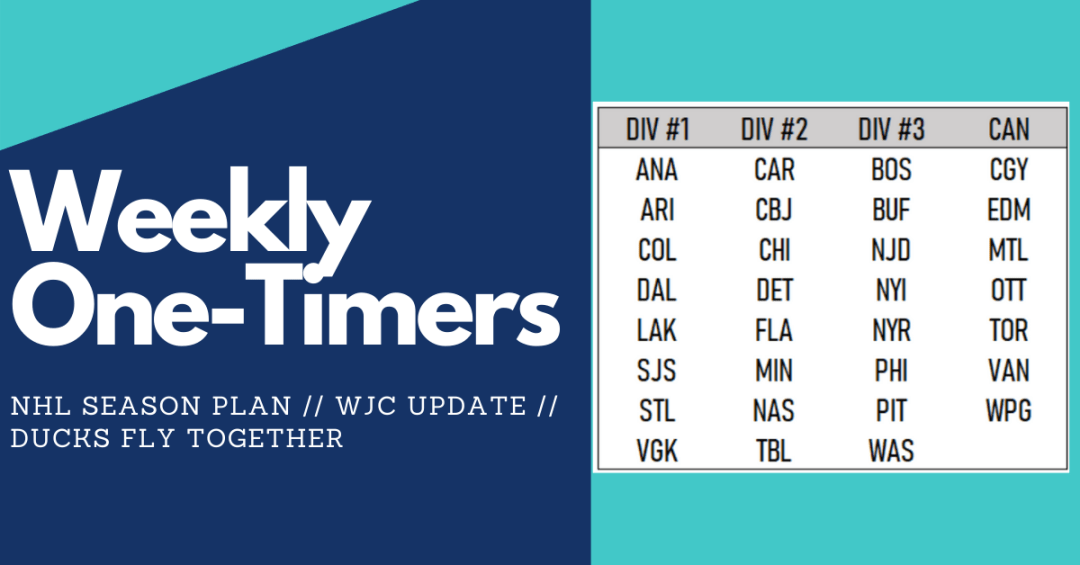 It appears that the NHL season will start on January 13th with 56 games, or at least that’s the latest plan. It still needs to be voted on by the NHL Board of Governors, but it appears very close to being fully baked.

Due to the ongoing border restrictions between the US and Canada, the NHL will need to realign for the 2020-21 season. How the divisions might end up looking has not been settled with the exception of the all-Canadian division. Here is a look at the latest reported alignment for this shortened campaign:

This can and has changed multiple times over the last week, and until we see it come from the NHL, we would recommend taking this alignment plan with a grain of salt.

Apparently, there was a proposal to kick the Flyers out of the league this year.

Bubbles, Hubs, or Series… Oh My!

The stated objective of the NHL is to play all the games in teams’ home rinks. That is all well and good until you realize that some locations would not be allowed to even practice in their hometown due to local restrictions, let alone play games. It is a stark reminder of who is really driving the bus here.

The NHL and the impacted NHL teams will need to figure out a solution on a case-by-case basis. It remains highly possible that teams might have training camps and home games in other teams’ facilities to start the season until case counts decrease and restrictions ease.

Additionally, the league is talking about scheduling options to limit travel and exposure. One proposal is to have a potential series format. This would work like baseball where a team plays the same opponent for 3 games over 5 days in the same facility.

There are still a lot of questions around playoff format, fans, and schedule. We should anticipate hearing a lot more on the plans over the next seven days.

Team Canada has announced its roster for the upcoming World Junior Championship.

Sadly, friends of the Sound Of Hockey Podcast, Gage Goncalves (Everett Silvertips) and Seth Jarvis (Portland Winterhawks) were among the final cuts from the squad.

Remember, Team Canada had to pause its selection camp and have everyone quarantine for 14 days in a Red Deer, Alberta hotel due to positive Covid-19 tests in November. So, after going through all that, the last-second exclusions from the team have to be extra painful for everyone that didn’t make the final roster.

Former NHLers Ray Ferraro and Martin Biron had some words of encouragement for those that didn’t make it.

Team Sweden had a rash of positive tests amongst players and staff, and actually had to replace its head coach, Tomas Monten. Sweden has now named Joel Ronnmark as its last-second head coach.

Team USA’s final roster will be announced on Sunday.

Team Russia did release its final roster on its website.

Disney announced a Mighty Ducks reboot featuring Emilio Estevez himself as Gordon Bombay. And you know something? It… doesn’t… look… bad… ?

The internet responded in a predictably rational manner when John Shannon announced to the world via Twitter that the NHL was planning to privately purchase Covid vaccines as part of its season plan.

He then waited 90 MINUTES (!!) to send a follow-up tweet, which surely was seen by a small fraction of the people who freaked out over the initial tweet.

The University of Alaska Fairbanks announced that it would opt out of hockey and basketball this season, following the University of Alaska Anchorage in making the difficult call. Alaska Anchorage’s decision effectively ended that program, as the school planned to fold hockey due to economic issues after this season. There are fundraising efforts underway to save Seawolves hockey, but as of now, it appears we’ve seen the last of that team. Meanwhile, there doesn’t appear to be any plan to fold the Alaska Fairbanks program permanently, though there is a lot of uncertainty as to what will happen moving forward.

It would appear that UAF head coach Erik Largen does not agree with the decision to opt out.

This means that the Western Collegiate Hockey Association (WCHA) will be down to eight teams when it starts play in January.

This will be the last season for the WCHA as well. You may recall, UAA and UAF, along with the University of Alabama Huntsville, have been essentially voted off the WCHA island. The seven other schools will form a re-booted version of the Central Collegiate Hockey Association (CCHA) in 2021-22, adding St. Thomas University to the mix for that school’s first Division I season.