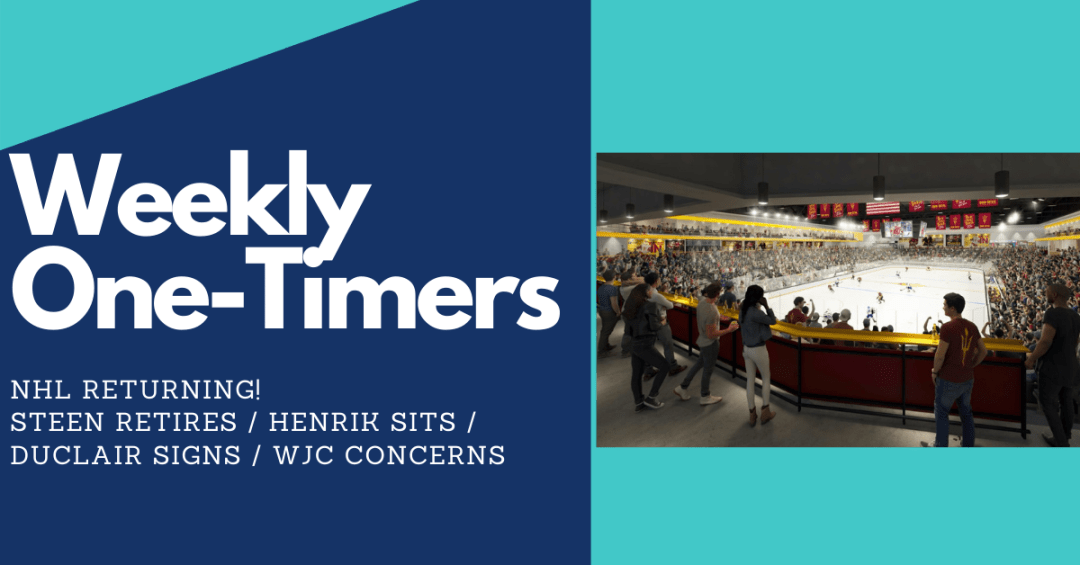 NHL Hockey is unofficially… officially… returning! The decision early in the week by the NHL to suddenly begin negotiating in public about a portion of its return-to-play plan for this season felt a bit ominous. We’ve seen from the lockouts of yesteryear that public negotiating by either side usually means bad things are coming. The league had started indicating that the COVID-related restrictions imposed by provincial governments could make it impossible for Canadian teams to play their games in their home arenas.

This would, of course, derail the widely publicized plan of having an all-Canadian division.

Thankfully, that all-Canadian division was not the lynchpin to getting a deal done after all, because the NHL and NHLPA announced in an obnoxiously late Friday night news dump that they have a tentative plan in place to begin the season on January 13th. All indications are that regardless of if Canadian teams are allowed to play in their own cities – or if they have to play in American cities – there will be a 56-game season.

Friend of the Sound Of Hockey Podcast, Scott Burnside, has the full breakdown of the plan in The Athletic, but here are the highlights:

Here is the latest divisional alignment plan, which still assumes that the NHL will be able to work out the all-Canadian division.

Obviously, if the all-Canadian division doesn’t come to fruition, then the above will be fully re-worked, and the Canadian teams will have to find American cities to temporarily call home.

Alex Steen is hanging up the skates after a successful 15-year NHL career. The big winger played 1,018 games in his career, and notched 622 career points. Steen started his career with the Toronto Maple Leafs in 2005 and was traded to the St. Louis Blues in 2008, where he played out the next 12 seasons, lifting the Stanley Cup in 2019.

Steen cited a back injury as his reason to retire, and more specifically, he apparently has some degenerative herniated discs that sound absolutely miserable.

As part of his announcement, Steen told stlouisblues.com, “This has been an emotional process. But as I look back on my years in hockey, I would like to thank our organization, our city, our fans, and my teammates as I am so proud of all the teams I was a part of.”

Steen has one year left on his contract, and apparently the Blues will still be charged against the cap.

Oh, and he just had a baby! What a week for Steen!

King Without A Crown

Speaking of health issues forcing players out of the NHL, Henrik Lundqvist announced that he will not be playing for Washington this season, as we were expecting.

Lundqvist apparently is dealing with a heart condition that would make it unsafe for him to participate.

While there is no indication in the statement that Lundqvist is planning to retire, he is now 38 years old, will not have a contract next season, and is dealing with a serious issue here. If this is the last we see of the dreamy Swede as an NHL player, it will be very sad to see it end this way.

King Henrik has had an incredible run. In his 15-year career, Lundqvist, who holds a career regular season record of 459-310-96, became synonymous with the New York Rangers and has been the perfect ambassador for the sport. He won the Vezina Trophy in 2012 and led the Blueshirts to the Stanley Cup Final in 2014, but has never lifted hockey’s greatest prize.

There was hope that in a back-up or secondary role with Washington, he may get one last kick at the can.

While it certainly isn’t the main takeaway here, one has to wonder who will platoon in Washington’s goal crease this season with 23-year-old Ilya Samsonov. Veteran free agents left out there include Jimmy Howard (36), Cory Schneider (34), Ryan Miller (40), and Craig Anderson (39).

The Minnesota Wild signed Andrew Hammond, AKA The Hamburglar, to a one-year, two-way deal. The signing comes after a revelation that Wild back-up, Alex Stalock, is out indefinitely with an upper-body injury.

Oh, and speaking of the Senators, former Senator Anthony Duclair finally signed a one-year steal of a deal for the Florida Panthers, worth just $1.7 million. That seems like a pretty great rate and a no-risk deal for a speedy winger that broke out for 23 goals and 17 assists in 66 games for Ottawa last season.

It is curious why Duclair, skilled and still just 25 years old, continues to get bounced around the league. Florida will be his sixth NHL team.

Advanced stats do offer some explanation…

Teams have arrived in Edmonton for the World Junior Championship, though they haven’t gotten there without some challenges.

Two planes were sent to Europe to bring six teams and their luggage. The planes were simply not large enough to carry everyone and their things, and still allow for social distancing. After a long delay to the teams’ journeys, cargo planes were eventually chartered to bring their belongings separately.

Now in the so-called bubble, positive COVID tests have been returned for eight of Germany’s players and two of Sweden’s staff members. Remember, Sweden lost several players from its roster at the last minute before traveling, as well as its head coach, due to positive tests.

Sweden also shared a too-small plane with Russia and Finland on the way to Canada, which adds to the concern around the positive tests.

Hopefully these are the last positive tests we see, and that everyone recovers quickly.

It’s also unclear at this time if the IIHF plans to resurrect the penalty music from last year’s WJC in Czech Republic. We remain optimistic that every time a player commits an infraction at this year’s tournament, he will again be subjected to the embarrassment of hearing this tune as he enters the box.