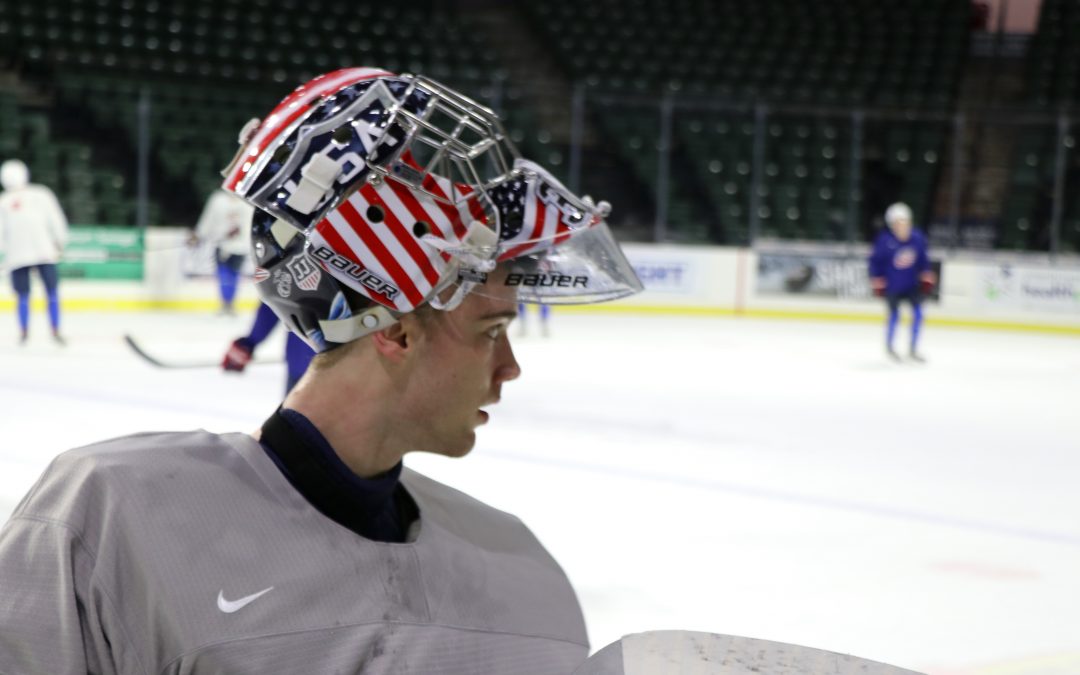 That probably wasn’t the start the Americans wanted in the World Junior Championship. The first WJC game for Team USA against Russia on Christmas Day ended 5-3 with the Red Machine getting the better of the play for most of the evening.

USA was sloppy with its puck management, committing dangerous turnovers it its own end and at both blue lines, and that really was the ultimate difference in the game.

If you’re rooting for the Stars and Stripes in this tournament, though, there was some silver lining. After falling behind 4-1 in the second period, Team USA did fight back to make it a one-goal game before conceding an empty net goal in the closing minutes.

So, there’s some fight in the Americans. Even in a game with careless puck play and as high as a three-goal deficit against a talented team with the world’s best under-20 goalie, there was still a chance for victory late in the game. And that is something upon which to hang your red, white, and blue hat.

Despite the disappointing American performance, it was ridiculously fun to drink a few glasses of Christmas cheer and watch elite-level hockey. Here are the three things we learned from USA’s opening loss to Russia.

Montreal Canadiens’ draft pick, Cole Caufield, got minimal playing time in the opening period Friday. Why? We have no idea.

The Wisconsin Badger was dangerous every time he touched the puck and looked faster and more shifty than anybody else when he was in control. The problem was that he didn’t get that many looks, and when he did, it was too frequently on the perimeter and trying to create opportunities for himself.

Caufield loves finding a quiet spot on the ice away from the puck and then quickly striking when a teammate finds him through a seam. That didn’t happen Friday.

Trevor Zegras (ANA) also showed why he’s considered one of USA’s top offensive threats with a late power play rocket off the post and in.

Meanwhile, Matt Boldy (MIN) was strong everywhere on the ice and Cam York (PHL) had USA’s first goal and added an assist.

There are kinks to work out for Team USA if it wants to have a chance in this WJC, and Russia exposed that. But there is real talent here, and despite the loss, there’s no reason to think USA can’t end up on the podium on January 5th.

While Russia’s Yaroslav Askarov (NSH) has earned top billing for goalies in this tournament – and showed why on Friday with some remarkably athletic saves – Spencer Knight is one of the other netminders that has received plenty of hype and praise, including from yours truly.

Knight had a really tough… night… though.

It probably wouldn’t have looked that bad for the Florida Panthers’ first-round draft pick, if it weren’t for his puck play outside of the crease. And frankly, Knight made a good pass on one of the his two gaffs before defenseman Jake Sanderson (OTT) turned the puck over and hung Knight out to dry.

This one was pretty bad, though, and this goal – Russia’s fourth – landed Knight on USA’s bench.

In all, Knight was credited with just four saves on eight shots Friday. Oofda.

In came Everett Silvertip and friend of the Sound Of Hockey Podcast, Dustin Wolf (CGY). The 2019-2020 CHL Goalie of the Year came on in relief and looked solid, stopping all eleven shots he faced, including two Russian breakaways.

Knight has long been considered the de facto starter for USA, but the team would have had a better chance to win if Wolf had played the whole game.

One has to wonder now if Wolf will get more chances to start as we get deeper in the tournament. He has already been named the starter for Saturday’s contest with Austria.

While USA head coach, Nate Leaman, has maintained all along that he plans to use both Knight and Wolf in the WJC, the preliminary round games are absolutely auditions for the quarterfinals and beyond.

Execution was the achilles heel for Team USA against Russia, and that has to improve as we move along in the WJC. Turnovers in bad spots on the ice ultimately did them in against a more opportunistic and more crisp Red Machine.

A sequence four minutes into the second period summed up the contest pretty well. Bobby Brink (PHL) found himself with the puck on his stick in the slot and a gaping net in front of him, with Askarov nowhere to be found.

But Brink shanked a snap shot wide of the net. A goal there would have given USA a 2-1 lead.

The Russians executed. The Americans did not.

The US goes right back to work at 6:30PM Pacific on Saturday against a lesser opponent in Austria. Perhaps that will be a chance for the Americans to ramp up the execution that escaped them on Friday.