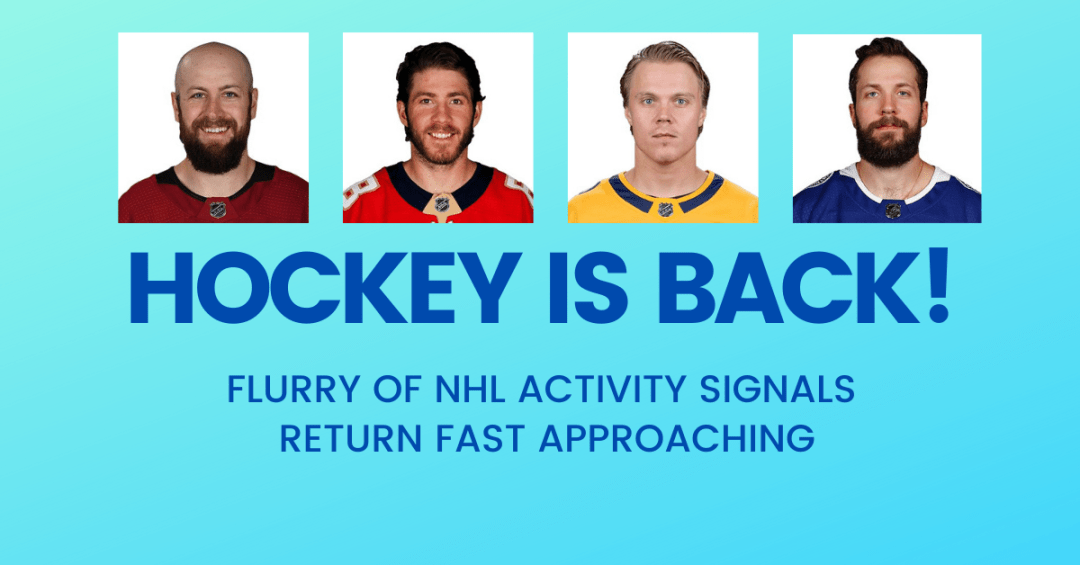 It’s been a weird year, no doubt. Amidst everything else that has happened in 2020, hockey has played out in a very strange way. After shutting down in March, the National Hockey League completed its playoffs in a late-summer bubble. That late-summer timeframe is usually when NHL general managers go into their annual hibernation, and hockey news – trades, signings, and the like – becomes non-existent.

But with everything being thrown off the usual cycle by the pandemic, this year’s hibernation period came much later than normal. The lull that we typically see in August instead came in November and early December.

That’s over now. The GM’s are awake. NHL hockey is back on the horizon, and the lingering business is now being executed.

Here are some highlights from a recent flurry of activity around the NHL, as teams prep for the opening of training camps this week.

A hockey-related side effect of the pandemic is a decrease in money coming in for the league. After all, no fans means no gate revenue, and the NHL – which averages north of $1.3 million per game in ticket sales – certainly relies on this stream.

Everyone expected the league’s salary cap to go up this offseason, but the revenue losses instead led to a flat cap at $81.5 million for the upcoming 2020-21 campaign. The flat cap meant that general managers who were already feeling the pinch now were in even more of a bind, and in some cases desperately needed to shed salary prior to the opening of the season in January.

The pinch on teams across the league also left a pool of respected NHL veterans without jobs, including the likes of Mike Hoffman, Mikael Granlund, Anthony Duclair, and many others.

The salary cap dominos have started to fall. Of the teams that were cap-strapped, the situation for the Stanley Cup champion Tampa Bay Lightning seemed the most dubious.

News broke just before the Christmas holiday that former Hart Trophy winner, Nikita Kucherov, would go onto LTIR after undergoing hip surgery, and is expected to miss the entire regular season. That’s certainly not how Lightning fans hoped the team would achieve cap compliance, but the announcement was quickly followed by the re-signing of restricted free agent center, Anthony Cirelli. So, the team was obviously getting closer.

Then, GM Julien BriseBois performed some more voodoo accounting, dumping Braydon Coburn, Cedric Paquette, and a 2022 second-round pick to the Senators for the contracts of Marian Gaborik and Anders Nilsson, both of whom will be placed on LTIR and will not play this season. It’s shifty work by BriseBois, but the moves make his team cap compliant, at least to start the season.

The Senators were also involved in a trade that brought in Derek Stepan from the Arizona Coyotes in exchange for a second-round pick. Ottawa… is… a team.

The most fascinating “signing” (wink wink, nudge nudge) of the past few weeks is definitely Hoffman heading to St. Louis, at least for training camp. He has agreed to a professional tryout deal, which technically means that any team can still sign him. The hockey Twittersphere seems to be assuming that he will ultimately play for the Blues this season, though, despite the fact that he is currently not under an actual contract.

The expectation is that Vladimir Tarasenko – who underwent yet another shoulder surgery and is expected to be re-evaluated in February – and Alex Steen – who has retired citing back injuries – will be placed on long-term injured reserve. The team will wait to make these moves, however, until just before the season to maximize the amount of cap savings that they will receive for the LTIR designations. It’s at that point that it will have enough space to sign Hoffman.

Fascinating that we already seem to know how much Hoffman’s contract will be worth, even though he hasn’t technically been offered anything yet, isn’t it?

Hoffman has never been known for his defensive prowess, but he definitely packs an offensive punch. The 6-foot-0 forward has never scored fewer than 22 goals in a full season and has notched 65 goals and 129 points over the last two years with Florida. Assuming he actually spends the season with the Blues (sounds like he will), Hoffman will prove to be a pretty great eleventh-hour replacement for Tarasenko.

Nashville brought back Granlund on a one-year deal worth $3.75 million, and also signed his old Minnesota Wild teammate, Erik Haula, for $1.75 million. After his deadline acquisition by the Predators two seasons ago, Granlund was horrendous down the stretch. He did bounce back a bit in 2019-20, though, with 17 goals and 13 assists. He’s better than his stat lines the past couple years, so $3.75 million could work out to be a bargain.