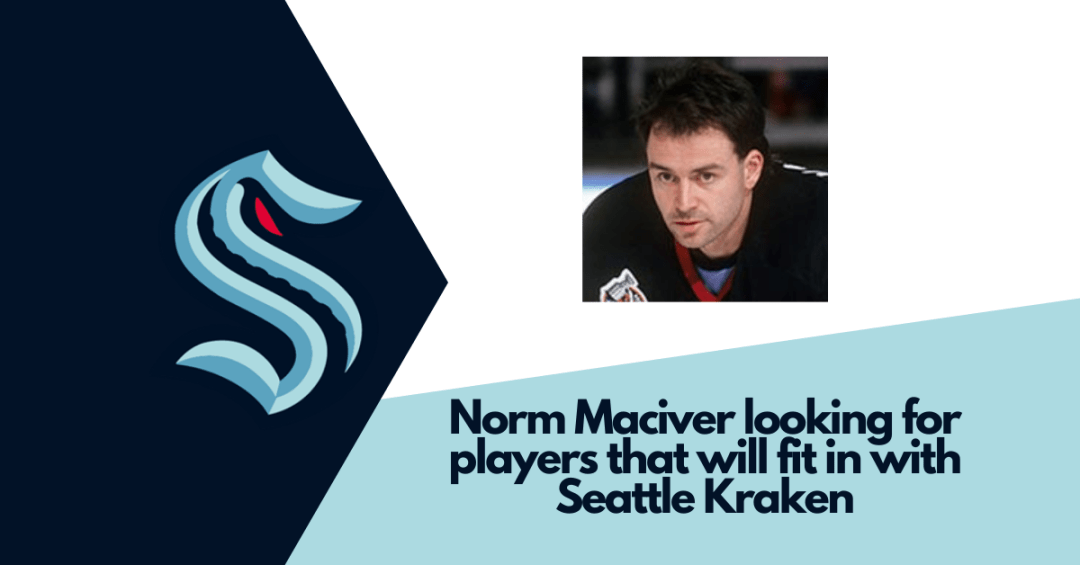 When the Seattle Kraken announced the hiring of Norm Maciver to serve in the front office, he talked about how excited he was to join a franchise at the ground floor. It played a huge role in leaving the Chicago Blackhawks, where he had served for 14 seasons.

It’s been a common theme among Kraken hires.

Everyone from general manager Ron Francis to assistant general manager Jason Botterill has expressed that same draw of starting a franchise from scratch. It’s an excitement that’s wrapped up in a huge challenge and undertaking.

Maciver has done it all in the NHL from player to coach to front office work. He’s faced many challenges, but the one in Seattle will be different than the one he faced when he joined the Chicago front office.

The Blackhawks were an established franchise. As the Kraken director of player personnel, Maciver now is tasked with helping the Kraken establish themselves in a similar manner. Winning three Stanley Cups, as he did with Chicago, would be nice as well.

“The challenges are totally different,” Maciver says. “In Chicago you’re dealing with a team that’s had a lot of success, that’s a little bit on the downside now. You’ve got contracts and you’re dealing with a lot of situations like that where here it’s totally fresh. We don’t have any players yet so it’s a matter of looking at what might be available in July and what players might be a fit for what we’re trying to do here…that just sounded so exciting and I’m looking forward to getting into it.”

Maciver will be watching a ton of hockey

As director of player personnel, Maciver will be involved in evaluating players at every level of the Kraken organization.

He’ll monitor the progress of young players in the American Hockey League, in the amateur ranks, and on the NHL roster. He’ll work with the team’s scouts, player development staff, and the general manager to ensure that the players in the system are on the right track.

He’s going to be watching a lot of hockey.

“In a normal year and season, you get your eyes on a little bit of everything,” he says. “You’re watching junior, you’re watching the American League, college and the NHL. You have to be aware of European free agents as well.”

With no players to monitor yet, Maciver will be assisting in the process of preparing for July’s Expansion Draft.

But its more than just scouting players. Maciver and the rest of the Kraken hockey operations team will get their heads together and establish the team’s culture and identity. It’s an underrated aspect to putting together a club and one that again, will be put together from the ground floor in Seattle.

Maciver’s experience an asset for the Kraken

Thanks to some really terrible down years the Blackhawks were able to select two generational talents – Jonathan Toews and Patrick Kane. The two stars were the catalysts to the Blackhawks winning Cups and can make coaches, general managers, and Maciver look good.

But it wasn’t as easy as that.

Chicago had to find depth players, guys who would compliment Toews and Kane and push the Blackhawks over the top. Something that’s easier said than done.

“It’s a challenge we saw in Chicago over the years,” Maciver says. “The core guys became really established as star players in the NHL. A lot of times when you brought in young players they were intimidated. A lot of young guys would defer. Meaning, every time they were on the ice with one of these stars they would give the puck to them, let them do their thing…for some players it’s tough to play with star players. It takes a certain mentality of young players to not be in awe and just go out and play. It is tricky sometimes to make sure you find that chemistry when you have those star players.”

Finding guys to do that is one of the challenges and responsibilities of player personnel directors.

Maciver points to Andrew Shaw as a player that the Blackhawks brought up and fit in perfectly with their stars. Not an obvious NHL prospect, Shaw was a fifth-round draft pick of Chicago but made his way to the NHL and contributed to two Stanley Cup winners in 2013 and 2015. Turns out he was a perfect fit.

Being in charge of player personnel also requires weighing in on trade possibilities.

While ultimately the responsibility of the general manager, Maciver will have input on how players with another franchise might fit in. Again, it’s something he had a hand in with the Blackhawks.

It ultimately comes down to trying to project that fit. How will the player targeted fit in with the new team? One such player was Dylan Strome who Chicago acquired early in the 2018-2019 season from the Arizona Coyotes.

After being selected by Arizona with the third overall pick in the 2015 Draft, Strome had a couple of lackluster seasons with the Coyotes. In Chicago, he posted career numbers immediately.

The Blackhawks saw a fit and made the trade.

“In the case of Dylan, in Arizona they had a lot of young guys,” Maciver says of the trade. “We had an opportunity in Chicago, he had had chemistry in junior with (Chicago center Alex) Debrincat. They were dynamic in junior so the thinking at the time was this could be an opportunity for both of them to hopefully do similar to what they accomplished in junior. Dylan has progressed nicely in Chicago.”

The challenge of scouting for July

Obviously, the hockey world is different than it’s been every other season. Most NHL arenas are not allowing fans, some are allowing scouts, and there has been very little amateur hockey to watch.

The Kraken will have to find players for whom they may not have had as many viewings as they’d prefer.

Even at the AHL level things will be different for Maciver. Seattle’s affiliate in Palm Springs won’t be ready to play until the 2022 season but the team will need minor league players for its first year. The team will announce that they will split an affiliation with another AHL franchise for the first season.

Maciver will have to monitor those players to judge their progress towards becoming NHL regulars. Having prospects split may lead to some complications.

“It can be a challenge but it’s not something that hasn’t happened before,” he says. “Back 30 years ago that was more of the norm in the AHL. Virtually all of the teams were dual affiliates. I know from my own experience; I was a coach in the AHL in a similar situation. Even though I was hired by one team, yeah, you obviously wanted to make sure your prospects continued to improve but you had to play the players who deserved the ice time. You want to make sure you have prospects that deserve to play and if they do deserve it, I’m confident they will play.”

Maciver and the Kraken have their work cut out for them with all these challenges. Finding the right players for not only the first year but drafting the future in the NHL Draft will be tough with hurdles the pandemic has placed in front of them.

Its coming quick and its not something Maciver and the Kraken staff are shying away from.

Maciver is currently living in Minnesota and until recently hadn’t been to a hockey game since the NHL shut down the season last March. He’s ready to go.

“The clock is ticking but I think it’s fun,” Maciver says. “Personally, just getting into the rinks again, seeing games live, you’re more confident talking about players versus watching them on video. I’m just excited about that. I think these months will fly by but since I’ve been onboard, we’ve had some really good conversations and I’m looking forward to more.”