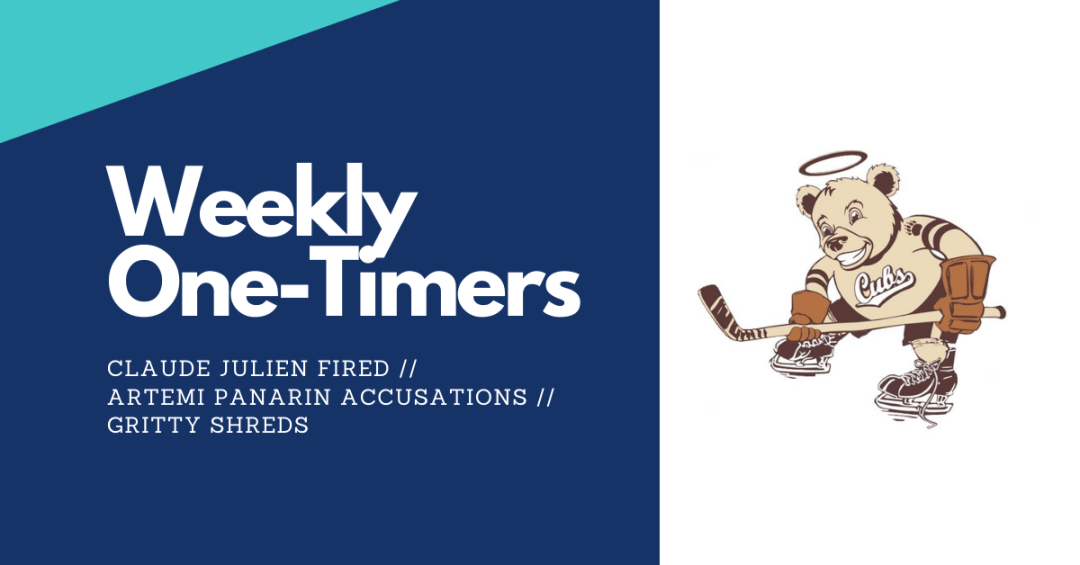 It has been another relatively quiet week on the Seattle Kraken front, and around the Seattle sports scene in general there has been practically no news or semblance of significant controversy [slams door just in time to fend off barrage of rotten vegetables, daggers, and pitchforks].

There have been some major bombshells heard from around the rest of the hockey world, though, so those will be the focus of this edition of Weekly One-Timers. For the Kraken-minded reader, here are a couple items to at least whet your appetite because again, we know there hasn’t been much to talk about for Seattle sports fans.

What an odd ride the last six months have been for Claude Julien. In August, he was hospitalized with chest pains which led to him missing the entire NHL playoff bubble. In October, general manager Marc Bergevin made several huge splashes to improve the Canadiens. With newly acquired Tyler Toffoli, Josh Anderson, and Jake Allen under his watch, Julien returned to training camp in January with elevated expectations. Fast forward a month and change, and Julien is out the door, despite the Habs getting off to a hot start and despite them still sitting in a playoff spot.

Well, in 2019-2020, the Habs nosedived into a few pits from which they never could fully emerge, highlighted by two separate eight-game losing streaks. In 2021, after they came out looking like world-beaters in the early going, Bergevin saw the Canadiens heading into another one of those holes. After the team lost six of eight including its last three in a row under Julien, Bergevin decided to take a proactive approach to stopping the bleeding. Assistant coach Kirk Muller was also issued a pink slip.

Julien is replaced in an interim basis by Dominique Ducharme, 47, who has been at Julien’s side since 2018. He is viewed as a progressive coach that will bring a new philosophy to Montreal’s bench.

Julien to the Seattle Kraken?

So will Julien be the first head coach in Seattle Kraken history? Maybe. Maybe not. That’s the extent of our conjecturing at this point.

But seriously, he will likely at least get considered for the job. Julien has 18 years of NHL head coaching experience that consists of two stints with the Canadiens, a brief stop in New Jersey, and 10 years behind Boston’s bench. His Bruins also hoisted the Stanley Cup in 2010-2011, and he boasts a career record of 667-445-152.

We at SOH do believe Seattle will select somebody with NHL head coaching experience as its first benchboss, and the team has made no bones about being patient until the right candidate becomes available. Is Julien that guy?

The other whopper of a story this week was New York Rangers superstar Artemi Panarin taking a leave of absence after being accused of assaulting a young woman in Riga, Latvia, in 2011. The claim comes from Panarin’s former KHL coach, Andrei Nazarov.

While most reports of this manner result in society quickly piling on athletes and celebrities and finding them guilty in the court of public perception, the opposite has happened here. Instead, countless journalists and former teammates and even the Rangers themselves have rushed to support Panarin, calling the accusations fabricated.

Well, Panarin has spoken out against Russian President Vladimir Putin in the past. On Jan. 21, Panarin posted on his Instagram in support of opposition leader Alexei Navalny, who survived an attempted poisoning while traveling abroad. Navalny eventually returned to Russia and was promptly jailed by Putin’s regime upon arrival. His arrest led to mass protests throughout Russia.

And wouldn’t you know? Coach Nazarov happens to be a staunch Putin supporter. VICE News had a fantastic write-up on the fascinating and generally bizarre story.

NHL Outdoors was a disaster… But then it wasn’t!

The ice melted. Hand up, I’ll admit it. I did not see that coming.

Through the first period of the Avalanche versus Golden Knights on Saturday, ruts in the ice were horrible, guys were falling all over the place, and play was generally slow and choppy.

So, the league made the very tough call to postpone until 9PM Pacific that night, and also to push back the start of Sunday’s game between Boston and Philadelphia until the evening.

In the end, it still was a great event, even with what some would perceive as an embarrassing eight-hour delay in the middle of the first game. The visuals were still stunning, the off-ice coverage was fun to consume, and the Flyers-Bruins game was the most-watched regular-season game ever to air on NBCSN.

Stealing the show was undoubtedly Gritty, who took in the sights of Lake Tahoe, shredded some gnar, and even crashed a wedding.

We can’t help feeling bad for Blades the Bruin, who played second fiddle to his Philadelphian counterpart all weekend, earning just a small fraction of Gritty’s recognition. Blades did have the last laugh when the Bruins beat the Flyers 7-3 on Sunday, though.

The WHL announced the full schedule for its US Division’s abbreviated season. The Seattle Thunderbirds will open on March 19 at home against the Spokane Chiefs. The Everett Silvertips will open the following night also at home and also against Spokane. The season will last until early May, and there will not be any playoffs.

Fans will not be allowed to attend games in person, but the WHL did announce a new streaming service through CHL TV that will allow viewing access to all scheduled WHL games. WHL Live, as it’s called, is $59.99 for the full season or $6.99 for a 24-hour pass. If you are a WHL fiend, remember, the Central Division starts play on Friday, so you’ll immediately have something to watch.

Seth Jarvis is good at hockey, Dustin Wolf bounces back

Typically, 19-year-old CHL players are ineligible to play in the AHL until their CHL season ends. But with the ongoing pandemic leaving major junior hockey in limbo for so long, the leagues made an unprecedented agreement to allow those that had signed entry-level pro contracts to temporarily level up until their respective CHL teams return.

Portland’s Seth Jarvis was selected in the first round of this year’s NHL Entry Draft by the Carolina Hurricanes. While he waits for his Winterhawks to return to play, he has been allowed to compete for the AHL’s Chicago Wolves, where he has been very impressive. Despite playing his first professional hockey, Jarvis already has six goals and three assists in just seven games.

Everett’s Dustin Wolf—selected in 2019 by the Calgary Flames—has been suiting up for the Stockton Heat. Wolf made his debut on Sunday and got shellacked by the Toronto Marlies, allowing five goals on just 11 shots. We’re happy to share that the friend of the Sound Of Hockey Podcast recovered beautifully in his next appearance, stopping 36 of 38 shots to earn his first professional win and first-star honors.

Wolf and Jarvis will return to the WHL when their teams start back up in March.

The King is back

Oh, you thought you had seen the last of Henrik Lundqvist’s dashing good looks after he said he wouldn’t play this season because of a heart condition? Well, look who’s back on the ice after open-heart surgery!

Could you imagine looking this good while running? I certainly can’t.

The Sioux Falls Stampede of the USHL will officially change its name (temporarily) to the Sioux Falls Fighting Wiener Dogs on Saturday. It’s the second time the team has performed this stunt, which comes in conjunction with the Sioux Nation Pet Clinic Wiener Dog Races. Get your Wiener Dog gear here!

Bruce Boudreau bought his second USPHL team over the summer, this one in Hershey, PA, his full-time home. The team has cleverly named itself the Hershey Cubs, and the logo is a thing of beauty.

The Cubs logo takes after the old Minnesota Fighting Saints of the WHA, for whom Boudreau played in the 1975-1976 season.