The condensed schedule in the NHL 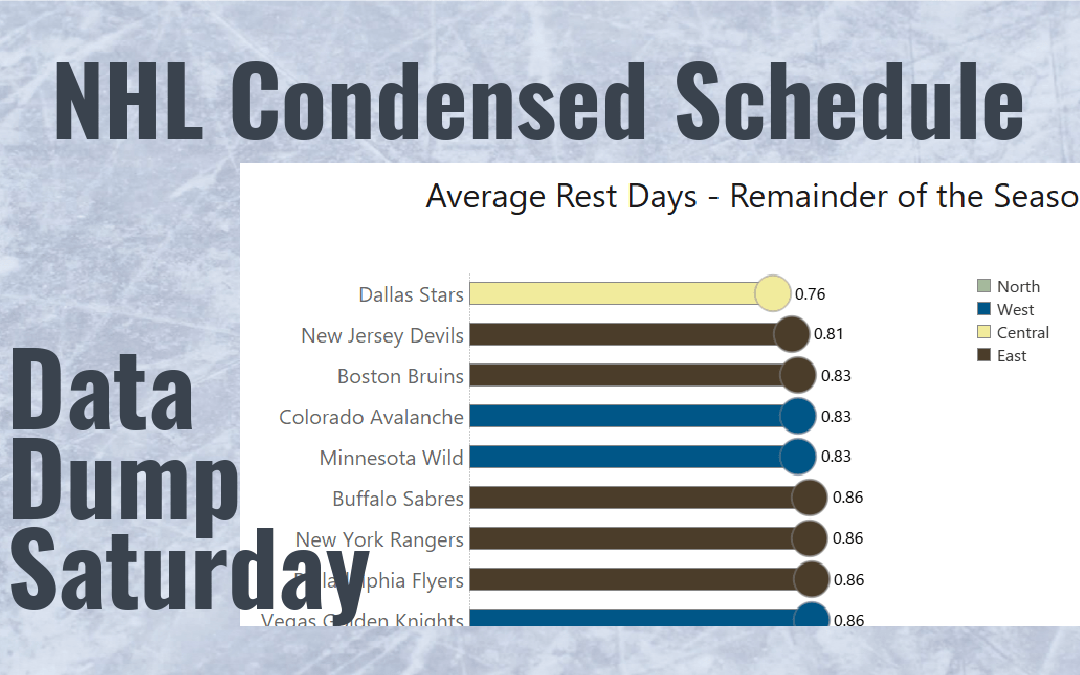 The NHL’s condensed schedule will prove challenging for teams down the stretch, especially those impacted by COVID and play stoppages. For this week’s Data Dump Saturday, I look at just how the condensed schedule is impacting outcomes around the NHL.

To evaluate how the condensed schedules impact team performance, we will look at rest days between games. Rest days will be defined as the number of days a team does not play. For example, if a team plays on Thursday, then Saturday, then that team plays Saturday’s game with one rest day. Back-to-back games means zero rest days.

Here is a look at the average rest days between games by team (as of Friday’s games).

Teams hit by COVID outbreaks that resulted in play stoppages are the teams with the highest average rest days between games.

Of course, every action has an equal and opposite reaction. Here is how the remainder of the season looks as teams that were sidelined earlier in the campaign will make up those games in the second half.

Back-to-backs in the condensed NHL schedule

Obviously one way to condense a season is to play more back-to-back games. The original schedule had several back-to-backs littered through every team’s schedule with the goal of fitting 56 games for all teams without moving the end date of the regular season. Once the season began, however, the teams that were shut down temporarily due to COVID outbreaks subsequently required even more back-to-back games. Buffalo, Dallas, and Philadelphia are a couple of the teams with extended shutdowns.

Here is a look at how many back-to-back games have been played this season so far and how many remain on the second half of the schedule.

Conventional wisdom would have one believe that teams playing back-to-back games would be at a disadvantage when playing a team with at least one rest day due to energy levels of players. I looked at the data through Friday’s games to confirm this.

Conventional wisdom is correct. Teams on a back-to-back playing a team with at least one rest day since their last game have a slightly lower point percentage at .531. There are only 16 games where this scenario played out, so the sample size is a bit small to make any hard conclusions.

To wrap up, here is a bit of a heat map of the rest days by team by week. Blue indicates more rest days while red indicates fewer rest days.

It will be interesting to see if teams with fewer rest days will prove to underperform against teams with more rest days in the second half of the season. The other thing to keep an eye on is the impact of rest days heading into the Stanley Cup Playoffs and into the opening rounds.