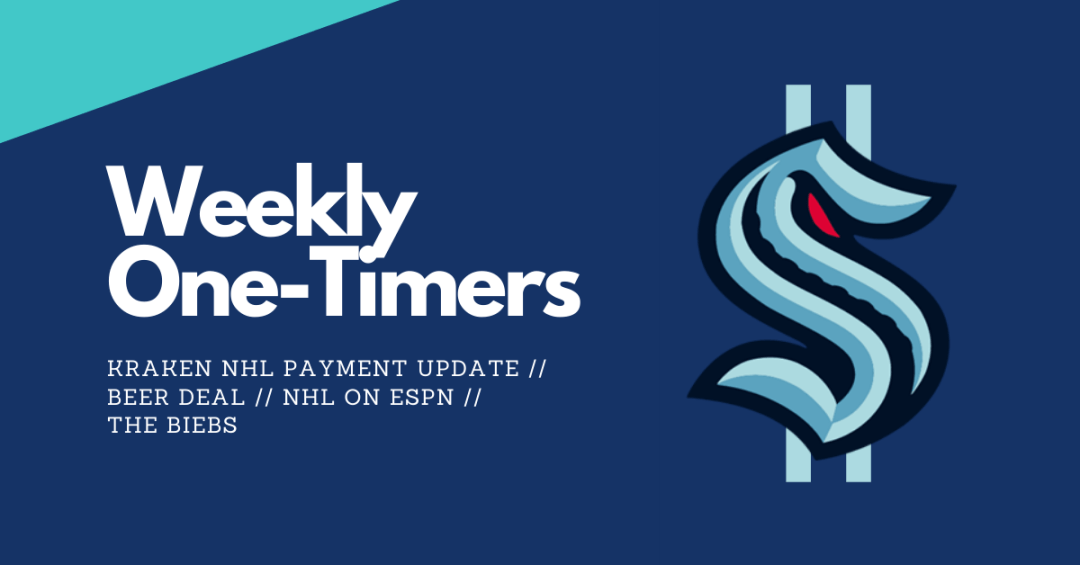 From the hottest of scoops to the coldest of beers, Sound Of Hockey has all the latest news from the Seattle Kraken and beyond in this edition of Weekly One-Timers.

It’s been another week of somewhat significant stories around the hockey world, so sit back, relax, crack open a cold one if you can (it is Friday after all), and let’s get you caught up on what’s happening on and off the ice.

Sound Of Hockey has confirmed via email from a team representative that the Seattle Kraken have not yet made their final payment to the NHL.

In 2017, the Vegas Golden Knights signed their first free agent, Reid Duke, on March 6. This means that they would have submitted their final payment on or before that date. Astute readers would notice that we are now past that date, so the Kraken are behind the Vegas timeline.

Seattle can make no such signings until that final payment is made. This is notable because college and some European league seasons are ending. When the NCAA season concludes, there is always a clamoring by NHL teams to sign the best players that slipped through undrafted, so unless the Kraken complete that last transaction soon, there is a chance they could miss out on some of those prospects.

The team also cannot vote on issues brought to the league’s Board of Governors, such as whether or not to move the NHL Entry Draft, which has been discussed at length recently.

The payment will of course get made in due time, and it really is nothing to worry about for Kraken fans. As the team confirmed this is on schedule, though exactly where final payment falls on that schedule was not disclosed.

That last payment is the final milestone for the team to hit before real hockey transactions can begin.

For whatever reason, though, I was just never a huge fan of Coors Light.

My beer palate has become quite refined as I’ve aged, but my general dissatisfaction after a Coors Light—regardless of the blueness of the can’s mountains—remains in tact. So, you can imagine my dismay when the Seattle Kraken announced that they had come to an agreement with Molson Coors to make Coors Light the official domestic beer partner for both the team and Climate Pledge Arena.

Thankfully for hopheads like myself, there will be other options available at Kraken games, as Hop Valley Brewing—also a Molson Coors entity—will provide craftier options. Phew!

Read all about the deal and what it means for the gameday experience here.

Now, if you’ll excuse me, I shall take a break to enjoy a refreshing and completely flavorless Natural Light, or as I like to call it, a naughty water.

Ok, now that I’ve been refreshed with an ice-cold naughty water, I’m ready to watch Steven A. Smith talk about the Kraken.

In a peculiar way, this man shouting at us is why the NHL going back to ESPN is so important for the league. ESPN still has the ears and eyes of the sports fan, and the network has been doing its damnedest to make hockey disappear from the sports lexicon since the league took its talents to something called the Outdoor Life Network in 2005.

But ESPN, ABC, and the NHL announced a new seven-year deal this week. The agreement will bring 25 regular-season games back to those networks starting just in time for the Kraken’s inaugural puck drop, plus playoff games and NHL All-Star Games. Additionally, the out-of-market content we now stream from NHL.tv will be moved to ESPN+.

In all, the deal is reportedly worth $2.8 billion.

It still is not all that easy to find anything about the NHL on ESPN.com, though, so here’s hoping that changes as the self-proclaimed “worldwide leader in sports” re-embraces the game we love so dearly.

Now, give me Gary Thorne calling hockey, or give me death.

NWHL to award Isobel Cup after all

The NWHL’s Lake Placid bubble burst at the beginning of February, abruptly curbing the momentum that was building for the league. When that happened, most in the hockey world assumed that was the last we would see of the league and its players this season.

It was a good try, and the tournament gave the NWHL a nice moment in the sun, but the pandemic had won. It was time to head home and just wait it out until this COVID thing subsides, and then we can start fresh next season.

The league announced this week that it will still award the Isobel Cup to a champion, after four qualifying teams—the Toronto Six, Boston Pride, Minnesota Whitecaps, and Connecticut Whale—battle it out March 26 and 27 at Warrior Ice Arena in Brighton, Mass.

One of the most disappointing aspects of the bubble (or “Whubble” as it became more commonly called) bursting was that the NWHL was on the verge of having games nationally televised for the first time ever when it was forced to shut down.

These newly announced games will be carried on NBC Sports, though, giving the league and women’s hockey another opportunity to shine on a national stage. It’s fantastic news all around.

Jordan Binnington signed a six-year extension with the St. Louis Blues worth $36 million. That’s a big bet on the Cup-winning netminder.

Artemi Panarin returned to the New York Rangers after a leave of absence that began on Feb. 22. The superstar forward stepped away from the team after he was accused of assaulting a young woman in 2011 during his time playing in the KHL. The unsubstantiated allegations came on the heels of Panarin expressing support for Alexei Navalny, the leader of the opposition to Vladimir Putin in Russia.

Justin Bieber wrote a “love letter” to the Toronto Maple Leafs. Please don’t tell any of my colleagues here at Sound Of Hockey, but I kind of love it.