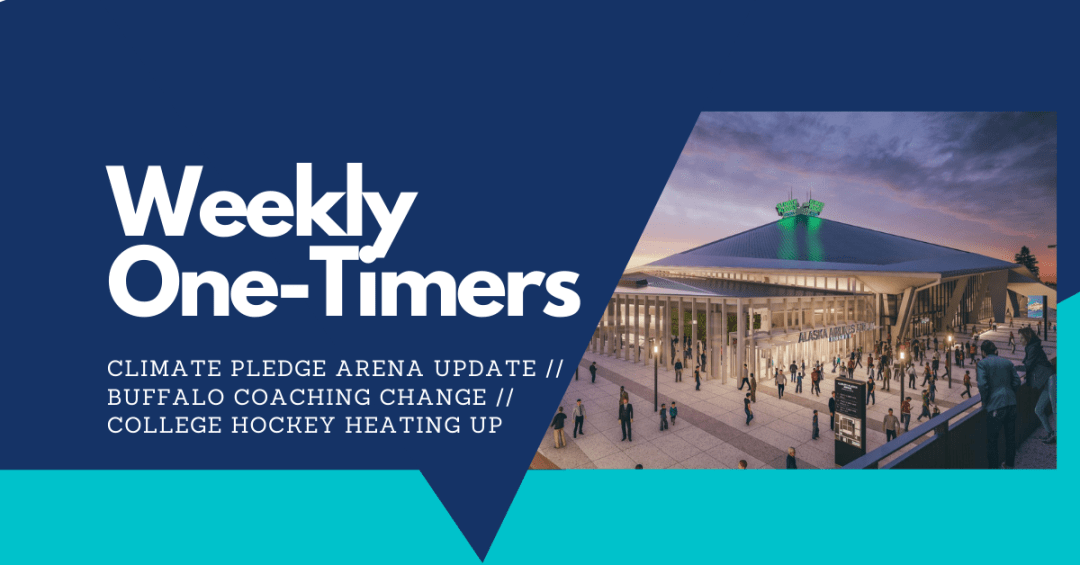 It was a relatively quiet week from a Seattle Kraken perspective, but we did get a few new images of the inside of Climate Pledge Arena and the progress that is being made there.

A personal hockey anecdote comes to mind when I look at these photos of Climate Pledge Arena. When I was a young lad, growing up playing goalie for a city called Burnsville, a suburb of Minneapolis, our closest rival was Apple Valley. One of Apple Valley’s two ice arenas was connected to its high school and had a glass façade on one end, allowing sun to freely shine through during the day. It allowed for some great natural light, no doubt a rarity in hockey arenas around the globe.

But perhaps there is a reason that most arenas do not allow for significant natural light to enter.

If you had the misfortune of tending goal during a day game at Apple Valley High School, then Godspeed to you when you played at the end that faced that façade, because you could not see a damn thing. I recall getting absolutely torched during a Saturday afternoon game in peewees and then vehemently blaming the sun in the locker room after the game. As a consolation prize for giving up nine goals that day, I at least went home with a nice tan, partially from the sun and partially from the goal light illuminating behind me so frequently.

With this torturous experience in mind, I can’t help wondering if curtains will be installed at Climate Pledge Arena, because if not, then we will likely have more of the below.

My guess is that the Kraken have thought of this for Climate Pledge Arena. The sun, after all, is the NHL’s greatest enemy as per Gary Bettman.

Oh, and also, the Kraken have been ranked higher than the Buffalo Sabres in the latest NHL power rankings produced by The Buffalo News. Movin’ on up!

Ralph Krueger out, Don Granato in

Speaking of Buffalo, the Sabres have fired Ralph Krueger after an abysmal start to the season and a downright impressive 12-game losing streak. When the axe finally fell, Krueger’s Sabres were 6-18-4. He becomes the sixth coach fired in Buffalo in just eight years and lasted just one and a half seasons behind the bench. It’s quite remarkable how many different tactics they’ve taken within that organization; how many different players, coaches, and managers they’ve thrown at the issue that is Sabres hockey with seemingly the same miserable result every season.

And speaking of Burnsville, Minnesota, Don Granato—a Burnsville High School alumnus—takes the job over on an interim basis. Granato had been Krueger’s assistant and frankly has paid his dues. He has coached at seemingly every level of hockey, from USHL to the National Team Development Program to college hockey to the NHL. He is the brother of Seattle Kraken pro scout Cammi Granato and University of Wisconsin men’s head coach Tony Granato.

Don Granato nearly died last year after complications from pneumonia, so one has to feel good about the guy getting a shot. Still, it will be a steep uphill battle for him because the situation in Buffalo is quite dire. Only time will tell if Granato can right that porous and listing ship, or if yet another coach will be brought in to face the same impossibilities as the previous half-dozen combatants.

The first day of the NCAA Women’s Frozen Four played out on Thursday.

In the earlier of two semi-finals, Skylar Fontaine scored late in the first overtime period to give tournament favorite Northeastern a 3-2 win over Minnesota Duluth.

The Huskies overcame a 2-0 deficit in the contest with three unanswered goals. The win means they will play in their first ever NCAA championship game.

In the later semi-final, Wisconsin jumped out to a 3-0 lead over Ohio State. The Buckeyes made a game of it, but ultimately the Badgers came away with a 4-2 victory. Wisconsin now has a chance to win its sixth NCAA title.

Northeastern and Wisconsin were the Nos. 1 and 2 seeds entering the tournament, so this should be a fun matchup for the title. That final game will be played Saturday at 4:30PM Pacific (today!) and can be viewed nationally on ESPNU.

Dani Rylan Kearney founded the NWHL in 2015 and served as commissioner of the league until this past October. Since then, she stayed involved in an advisory role and continued serving as president of W Hockey Partners, which owns the Buffalo Beauts, Connecticut Whale, Metropolitan Riveters, and Minnesota Whitecaps. She has resigned from those remaining roles, meaning her involvement in the league that she created has now ceased.

The league didn’t give any particulars on why Rylan Kearney severed ties with the league she launched, opting to instead issue a vague press release.

The NWHL is still planning on finishing its season March 26 and 27 at Warrior Ice Arena in Brighton, Mass.

The Anaheim Ducks have several touted prospects in their pipeline, highlighted by Trevor Zegras, the superstar of the gold-medal-winning Team USA World Junior Championship team. Zegras, 19, has been up with the Ducks for 11 games but entering Thursday’s contest against the Arizona Coyotes had been held without his first NHL marker.

That changed when the slick-mitted forward gathered a bouncing Troy Terry pass and lofted it over the outstretched pad of potential future Kraken Aiden Hill.

What was most remarkable about Zegras scoring his first NHL goal was the fact that his roommate, Jamie Drysdale, had beaten him onto the scoreboard with his first NHL goal just minutes earlier, and Drysdale also assisted on Zegras’s goal. Oh, and by the way, this was Drysdale’s first NHL game.

Rangers win 9-0 without their coaching staff

The New York Rangers, who frankly haven’t been great this season, hung a nine spot on the Philadelphia Flyers on Wednesday. You don’t see that every day. What you especially don’t see every day is a team hanging a nine spot on another NHL team when the winners do not have any of their coaching staff on the bench due to Covid-19 protocols.

Here are all nine tallies, including three from Mika Zibanajad, who doubled his season goal total in one period.

Perhaps the struggles on Broadway have been because of the guys behind the bench?

We at Sound Of Hockey were devastated to hear of the tragic passing of Timur Faizutdinov, a 19-year-old who was playing for Dynamo St. Petersburg’s junior team.

Faizutdinov was struck in the head by a puck during a game this week against Yaroslavl and eventually perished after several days in the hospital. The fatal blow came from an innocuous-looking dump-in from the neutral zone that apparently found its way around Faizutdinov’s helmet and hit him in exactly the wrong place.

Our thoughts are with Faizutdinov’s friends, teammates, and loved ones.