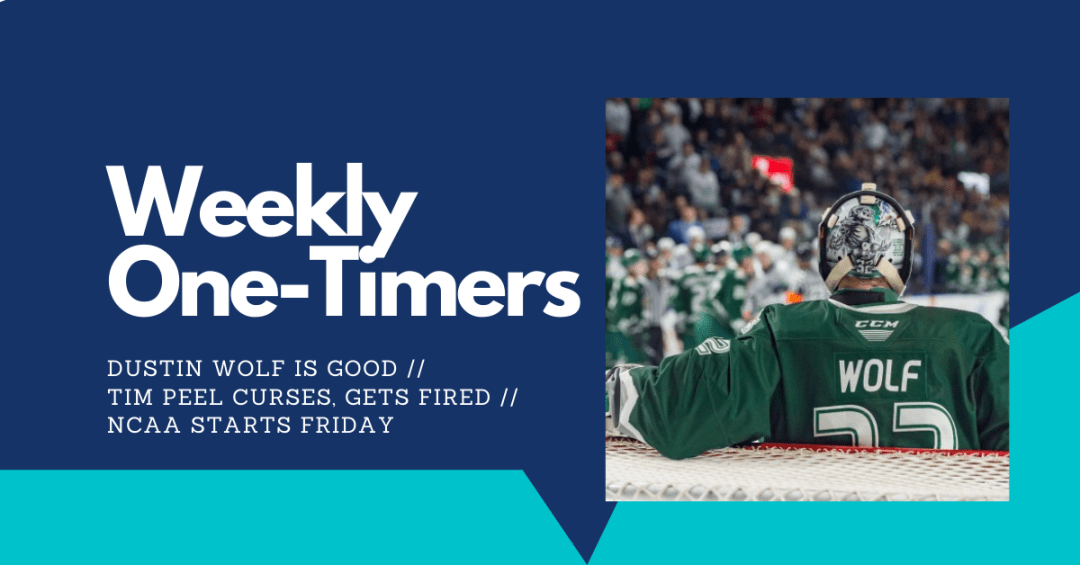 It’s been a roller coaster of a week in the hockey world with several high points matched by equally low points. We at Sound Of Hockey are here to fill you in on anything you may have missed on this wild ride. Please ensure your safety belt is fastened, keep your arms and legs inside the vehicle at all times, and secure your belongings. Because it’s time for another round on the high-octane thrill ride that is Weekly One-Timers.

We will start with the ugly and certainly more scandalous news out of the WHL. The Seattle Thunderbirds announced in a statement Thursday that two of their players have been removed from their roster following an incident in the team’s dressing room, in which they made racist comments aimed at a third player on the team.

It’s not a good situation, and I feel for the victim of the verbal abuse. It’s yet another stark reminder that hockey has a very long way to go before it can claim to be an inclusive community, which it certainly still is not.

Credit to the Thunderbirds for taking the situation seriously and invoking their zero-tolerance policy toward racism and bullying.

Dustin Wolf is good at hockey

Ok, here’s the good stuff I promised. Dustin Wolf has played three full games for the Everett Silvertips this season. He has not yet allowed a goal. The latest triumph for the 19-year-old Calgary Flames prospect came by way of a 3-0 victory over the Tri-City Americans on Wednesday, in which Wolf confidently stopped all 30 of the shots he faced.

Remember, Wolf was one of the players who was allowed to temporarily play in the AHL with the eligibility rules altered due to the ongoing pandemic. While playing for the Stockton Heat, Wolf appeared in three games. He was shellacked the first night but rebounded to allow just three combined goals in his second and third starts, returning to the WHL with a 2-1-0 professional record.

Now back in the WHL and facing shots from players more his age, Wolf looks unbeatable. The streak ties Wolf with Carter Hart for most consecutive shutouts by a Silvertips goalie and leaves him one shy of tying the league record. He now has 23 career WHL shutouts and is just three away from tying Hart and Tyson Sexsmith for the WHL career shutout record of 26.

Can Wolf come up with four more shutouts in this short 24-game season to break the all-time WHL record for career shutouts?

This happened on Tuesday. Please note there is naughty language heard in the below video, so please say “Earmuffs” to any small children in the immediate vicinity before pressing the play button.

The naughty language came from the mouth of referee Tim Peel.

Here’s what the internet was saying on Tuesday, after that happened:

Then this happened on Wednesday:

The internet on Wednesday, after that happened:

Worth mentioning, none of the above quotes are real quotes from the internet, but it is a pretty fair representation of what was being said within the given timeline.

The general opinion of Sound Of Hockey on the matter is that Tim Peel got screwed. He was a veteran referee on his way to retirement after this season. He was managing the game, just like every NHL referee has done and will continue to do. His only crime was that he got caught on a hot mic verbalizing the unwritten strategies that officials employ to make sure they aren’t the ones deciding the outcomes of games.

It’s all game management. Peel just talked about it and was heard on a broadcast, and now he’s been scapegoated.

If the league wants referees to simply call games as they see them, then it needs to identify the game-management approach as a problem and holistically re-think how it trains officials. Firing a guy just for talking about what he’s always been expected to do isn’t the answer.

Here’s a little something to remember Peel by as he rides off into the sunset in a way he certainly never expected.

The NCAA Men’s Hockey Tournament is starting Friday morning (that’s today!) at 10AM Pacific when MY WISCONSIN BADGERS take on the Bemidji State Beavers on ESPN2. Could MY WISCONSIN BADGERS follow in the enormous footsteps of the Badger women by winning another national championship for the **undisputed best school in the nation?

As much as I would love to see Wisconsin win this thing (UPDATE: Wisconsin lost in the first round to Bemidji State), it’s North Dakota’s tournament to lose. But as we learn every year, anything can happen in the NCAA Tournament, and that’s what makes it such a great viewing experience.

There was supposed to be a second game played at 10AM Friday, but Notre Dame has been forced to back out of the tournament due to COVID protocols. Ironically, the Fighting Irish were only included in the field because St. Lawrence University previously had to shut down its season for the same reason. Notre Dame’s game against Boston College is considered a no-contest, so the Eagles automatically advance and will now have to win just one game to reach the Frozen Four.

Hopefully this is the last COVID-related hiccup, as this is primed to be an incredible tournament.

UPDATE: It was not the last hiccup, as Michigan has also had to back out due to a positive test. UMD automatically advances.

Here is the full bracket.

Another big-time tournament gets underway on Friday, as the NWHL will finally finish its condensed season and award the Isobel Cup this weekend. The semifinals will be played Friday at 2PM and 5PM Pacific and the final will be played Saturday at 4PM Pacific. All games will be shown live on NBCSN.

“We’re going to need clean-up in the Taggart box, please”

Pierre Dorion got really mad after his Ottawa Senators lost in overtime to the Toronto Maple Leafs on Thursday and took his frustrations out on what appears to be lemonade or some other citrusy beverage.

The outburst reminded me of Cam Neely whipping his water bottle two years ago during the playoffs, and it also reminded me that I performed some video magic at that time.