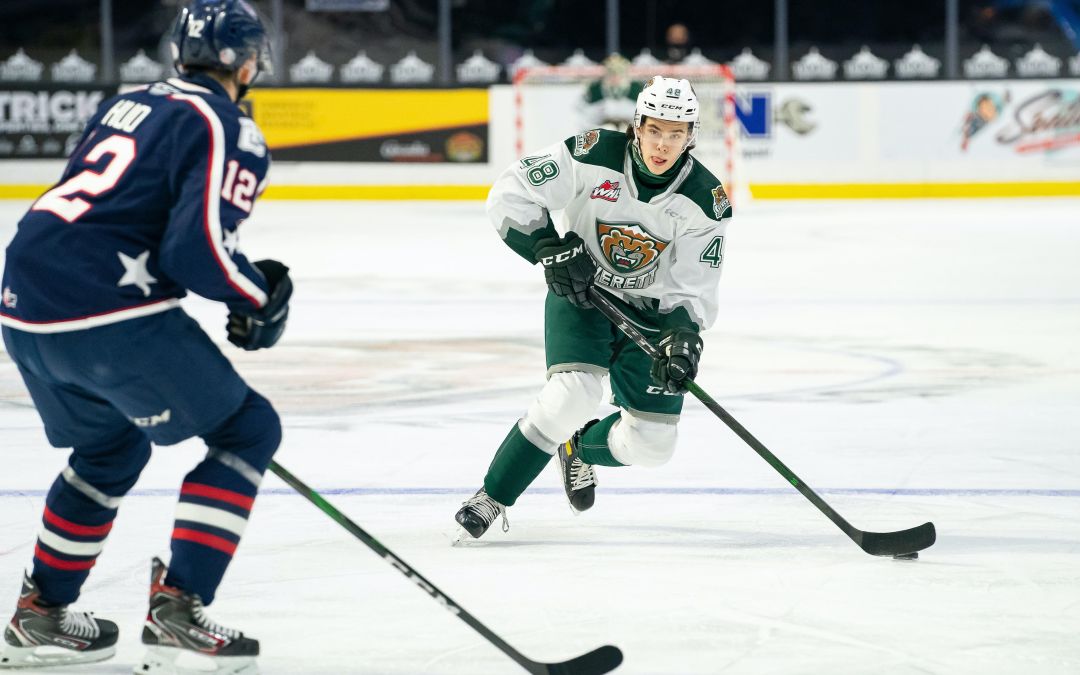 Halfway through the first period of the Everett Silvertips’ game against the Tri-City Americans on Wednesday, Olen Zellweger walked the offensive blue line, dragging the puck with him. With power play traffic gathered in front of Tri’s goal crease, he snapped a low shot that found its way through the mass of humanity and made netminder Talyn Boyko reach to his right. Boyko was out of position after the first save and never stood a chance on the rebound, as Jacob Wright tapped it home for the first goal of the game and the eventual game winner.

Walking the line and getting the puck through traffic is an artform, and one at which Zellweger excels. If you watch him closely, you will get a sense that almost every time he puts the puck toward the net, some level of chaos ensues shortly after.

Zellweger, a shifty 17-year-old draft-eligible defenseman who hails from Fort Saskatchewan, Alberta, is off to a great start offensively with a goal and four assists in five games on Everett’s blue line this season. He has picked up nicely after a solid 16-year-old campaign, in which he registered two goals and 10 assists in 58 games.

Zellweger has been playing with Gianni Fairbrother, a veteran in the WHL and a 2019 draft pick of the Montreal Canadiens. Zellweger credits his defensive partner with “making it easy” on him by really talking on the ice. The two are building chemistry as the season goes along, and Zellweger fits naturally alongside the older, more developed Fairbrother.

Playing on the top pairing, on the power play, and even occasionally on the penalty kill as a 17-year-old shows the level of trust that the Silvertips coaching staff has in Zellweger. He’s even playing the right side, despite being a left-shot defenseman. Zellweger doesn’t think it’s a big deal to play the offside, noting, “There’s pros and cons, but there’s pros and cons to playing on your strongside too.”

Silvertips head coach Dennis Williams put a little more thought into playing Zellweger on the right, though. “This is what we think of Olen as a player is we move him to his offside, which is not easy for a defenseman to do, especially in the Western League at that age.” The Silvertips have a glut of left-shot defensemen in Fairbrother, Zellweger, Ronan Seeley, and Aidan Sutter. “On the right side we needed to move one of those guys over, and we thought Olen, with his feet and his hockey sense and his ability to retrieve pucks and escape pressure because of his skating that he would be the best, so we were able to put him with a guy like Gianni Fairbrother and use them as shutdown D as well.”

For a young player like Zellweger to accept such a huge role—particularly playing the right side—and to shine is a credit to his abilities and his drive as a player. “It’s been working so far, I think he’s done a really good job with [Fairbrother], but again, it’s not easy,” Williams says. “Our forwards sometimes will fling a puck up the wall and forget he’s on his offhand. That’s tough to collect on your backhand as a guy’s coming out at you on the point, you know, to not bobble it, try to get it back deep. But, he’s done a really good job of trying to get his feet around it, have composure, absorb a hit, and get it back behind the goaltender.”

While his ability to create offense from the blue line is apparent, Zellweger’s skating is undoubtedly his greatest strength. He’s slick and deceptive and appears to move effortlessly on the ice. Despite being on the small side at 5-foot-10, 175 pounds, Zellweger never seems to get squared up for big hits. Instead, he lets his feet deliver him out of trouble in his own end, often spinning away from attacking forwards and even jumping up to lead the rush offensively.

He’s the true modern-day defenseman, who Williams calls a “relentless worker” who “lives and breathes the game of hockey.”

“There’s nobody on our team that works harder than Zell,” Williams adds. “And if you were to ask all 25 guys, they’d all give you the same answer. He wants to do everything in his power to be a hockey player and he gives himself the best opportunity, whether it’s eating properly, resting properly, his preparation for practice and games. He’s just a pleasure to coach, and to see him from last year to this year, you know, the strides… He’s definitely going to have an opportunity, I believe, to be a pro hockey player and an opportunity to be drafted in the upcoming draft.”

Williams is not the only one who believes that Zellweger will hear his name called by an NHL franchise in July. In fact, Zellweger landed on NHL Central Scouting’s “Players to Watch” list with a ‘C’ rating, making him likely to be selected in the fourth through sixth rounds. “It was pretty cool to be named to that list,” Zellweger says. “Obviously, I want to move up to whatever I can, so I think I just gotta go up from here.”

Zellweger isn’t embarking on this journey alone, though. “We have quite a few signed players on our team so they kind of know what it takes and they know what you gotta do. You gotta be focused and be prepared every day to play because somebody’s always watching.”

The Everett Silvertips are in the early stages of a shortened 24-game WHL season. There has been plenty of concern expressed around the hockey world for how young players could continue their development, especially when play was halted due to the pandemic. Zellweger took everything in stride, though, and saw it as a chance to augment his already impressive skillset. “It’s unfortunate that we don’t get the full season, but this will be a good opportunity for us, and I look at the shortened season and extra training time as a really good opportunity to improve upon weaknesses and stuff like that. So for me, it was good time and used well, so I think it was good for me.”

That extra training time shows, as Zellweger looks like the real deal. If he keeps scoring, he could hear his name called at the NHL Draft a lot earlier than his ‘C’ rating suggests.

Olen Zellweger and the Everett Silvertips are a perfect 5-0-0 this season and lead the U.S. Division with 10 points.