From Kansas City to the Wheeling Nailers, Taran Kozun has seen it all 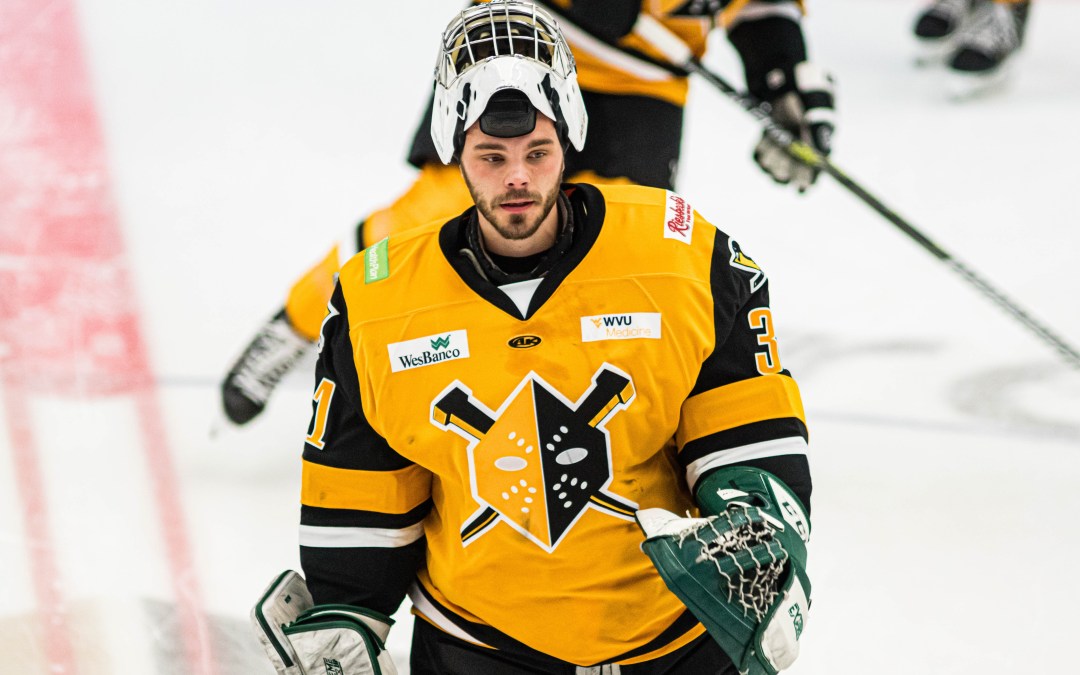 Taran Kozun led the Wheeling Nailers onto the ice at Hertz Arena in Estero, Florida, last weekend and took his familiar place in net. That’s where a goalie feels most at home. The Nailers were battling the Florida Everblades, and Kozun kicked away 26 of the 28 shots he faced to pick up a 6-2 win.

It was the second start Kozun made for the Nailers and his first win, backing up teammates he is still getting to know after being signed two weeks prior. Back in Wheeling, he’s barely unpacked his bags, just relying on a few necessities.

Outside of the goal crease, “home” has become a novelty for the 26-year-old former Seattle Thunderbird this season.

Since the ECHL season started in January, he has been with six different teams. The Nailers are the latest stop for Kozun and he’s hoping he can stay a while; hoping he can finally unpack his belongings. Life in the minor leagues offers no guarantees, especially for goalies, but this year has been uniquely topsy-turvy as Kozun has learned firsthand.

“Honestly, it’s been a whirlwind,” he says.

Taran Kozun’s journey to the Nailers began in Kansas City

After signing an ECHL contract to play for the Mavericks in Kansas City, Kozun traveled from his home in Nipawin, Saskatchewan to start training camp in December.

Things started rough as he tested positive for Covid and was put on the inactive list just prior to the start of the ECHL season. The Mavericks brought in other goalies and Kozun was on the move after playing in one game.

He had hoped he’d stay longer but also was aware the possibility of ending up with a different team was always in the cards.

“With ECHL you never know what’s going to happen with the goalie situation,” Kozun says. “When other teams sign a guy and guys get sent down there’s never a guarantee that you’re going to stay. I kind of knew there’s always the possibility of changing teams and that you’re never really set in stone to play for one team.”

As an ECHL goalie he was at the mercy of the NHL organization’s goalie movement. When the big club sends down a guy on an AHL or NHL contract, a player like Kozun is the odd man out.

The first change came quick and on Dec. 30 he was loaned to the Pensacola Ice Flyers of the SPHL. He played in one game and two weeks later was headed back to the ECHL to suit up for the Indy Fuel. After making 41 saves and picking up a win for the Fuel he was packed up and sent to the Rapid City Rush.

Again, he played one game before heading to the Orlando Solar Bears.

He was becoming the fill-in goalie. If a team had an injury, or another goalie ended up on the Covid list, Kozun would be brought in. Sometimes he’d hole up in an apartment with teammates who were strangers with little time to get to know them.

Others, he’d arrive with a team and go on a road trip, living in hotels and on Door Dash.

The constant moving was starting to drag on the normally easy-going Kozun.

“There were some tough days, I didn’t really want to go to the rink some days,” he says. “I didn’t know if I’d be coming home to pack my stuff. It was a really stressful time but I got my mind right and went to the rink and worked as hard as I could and worked out off the ice to help my cause to make sure I was ready to practice hard. It was definitely a hard couple of months. It took a lot of days of getting to know myself and getting through it.”

After a tough outing with the Solar Bears, he was able to turn to a friendly face. Kozun’s older brother, Tad, plays for Orlando and the two were able to spend some time together.

“I was getting to the breaking point to be honest,” Kozun said. “Just getting to hang out with him on the off days, if I wasn’t there, I was probably real close to saying I’ll just go home and call it a year. I didn’t know what to do or what to say to stick in a spot.

“Every time I brought it up with my brother he just said, ‘If you make it through, you’ll be good because you’ll know how to do it the next time.’ Not something that you like going through your head especially when you love showing up to the rink with the guys, hanging out with your teammates every day.”

Thanks to brotherly advice and a passion for hockey, Kozun has stuck with it. After Orlando he would move to the Allen Americans on Feb. 24 and eventually to the Wheeling Nailers on March 8.

Off the ice, Kozun is quick to smile and is a hit with his teammates everywhere he’s played.

He’s performed well in his stops prior to this year’s ECHL merry-go-round. The Seattle Thunderbirds picked him up via a trade with the Kamloops Blazers in 2014. The following season, his last in the WHL he was spectacular and would end up winning the WHL Goalie of the Year award.

After the WHL he played college hockey for the University of Saskatchewan where he turned in his best season of hockey. Kozun led the Huskies last season to a Canada West title. He was named Canada West Male Athlete of the Year after posting a 17-3-2 record and 1.87 goals-against with a .931 save-percentage.

“We had a really great coach in Dave Adolph,” Kozun says of playing in college. “Once he got the guys on the same page and got us playing the Husky way, it was a lot of fun. Those guys I’ll have great memories with, they’re like best friends. I have to give the coaching staff a lot of compliments. They did everything for me.”

Not only did he win a title with Saskatchewan, he fulfilled something that every goalie dreams of.

He scored a goal.

“That was pretty wild and something I’ve tried in the past and never been able to hit the net,” Kozun says. “For that moment, didn’t really know what was going through my head. I was lucky enough to hit the net. I think I was more excited to see the guys’ faces and how excited they were for me, that made the moment even better.”

After a goal and a college championship, Kozun has described this season as a ‘180’ from last year. But that doesn’t mean it’s been all bad. He’s been reunited with a former Seattle teammate in Evan Wardley in Wheeling and once the puck drops, he’s had fun.

“You’re just stopping the puck and making sure your movements are right…making sure my game’s always good. Playing games, you forget about everything, you’re worried about your compete level and being positive.”

Can Taran Kozun stay with the Wheeling Nailers?

Kozun’s love of hockey has helped him persevere through what has been an extreme season.

He’s learned how to deal with the unpredictability of minor pro hockey and done whatever he can to put his best skate forward when given the opportunity.

The plan is to keep pushing and to see how far he can take his hockey dreams, even if it means not fully unpacking his bags. For now, he’s a Wheeling Nailer and he’s going to compete every time he’s on the ice in practice or games.

“Whenever I get a chance to play, I want to win,” Kozun says. “If I don’t win, I’m not very happy with myself. Being able to have that compete really drives me and helps me mentally prepare for games and do my best. I’ve enjoyed it here in Wheeling and hopefully I can stay for a while.”