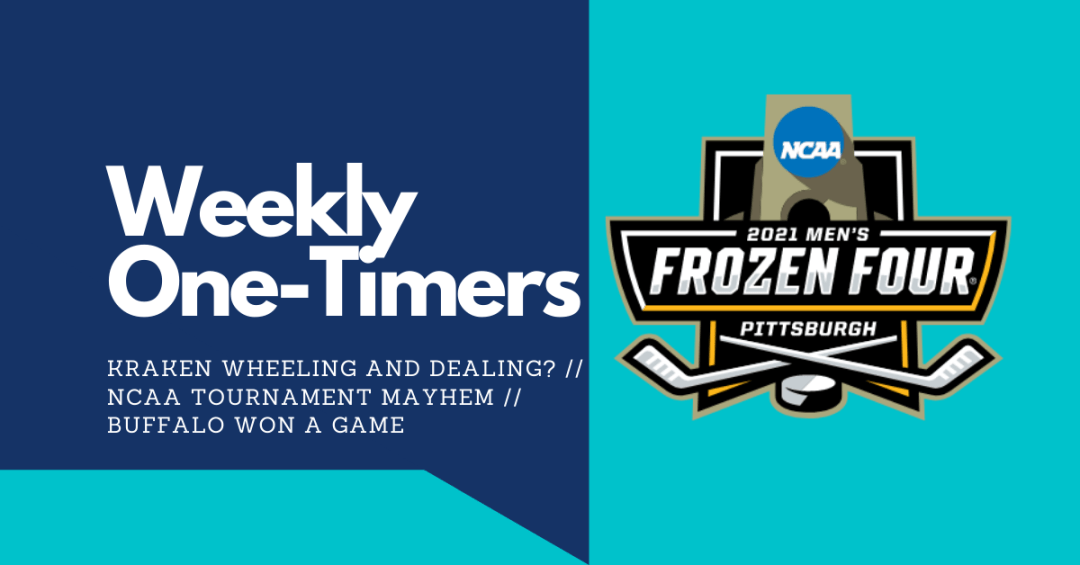 If hockey is what you seek, then the past week should have been quite fulfilling for you, because there was a LOT of it to be found. What’s more, much of the hockey that was played was quite entertaining, with each game across the various elite leagues seemingly more exciting than the previous. If this past week of hockey were a GIF, it would certainly be the Vince McMahon GIF seen below.

Yes, it has been a fun week, and we at Sound Of Hockey endeavor to continue satiating your appetite for hockey enjoyment with this latest installment of Weekly One-Timers.

Is Ron Francis wheeling and dealing?

It makes sense that Seattle Kraken general manager Ron Francis would be talking to his counterparts across the NHL to gauge their varying levels of interest in consummating side deals in the lead-up to the Expansion Draft this summer. But we’ve never officially seen or heard it reported that this was happening. Well, until now, that is.

The Athletic’s Pierre Lebrun wrote this week that Francis has been fielding calls from fellow general managers in advance of the April 12 trade deadline, as they try to get a better feel for what it will cost to keep the Kraken’s tentacles off of any newly acquired players. Lebrun also reported that according to his source, Francis is asking for “a first-round pick and a prospect and maybe another piece.”

Lebrun also discusses this starting at the 3:04 mark of the below video.

THE KRAKEN ARE WHEELIN’ AND DEALIN’! LET’S GO!

You saw the marathon game between North Dakota and Minnesota Duluth, right? Or at least part of it? Because it went on for six hours and 12 minutes, so you had to have at least stumbled upon it while scrolling through channels at some point in your Saturday evening. In the end, it was UMD — for the fourth consecutive time — punching its ticket to the Frozen Four, while UND players looked sad.

It was just an incredible contest in every aspect with bizarre things happening throughout. Case in point, UMD’s starting goalie, Zach Stejskal, was forced out in the fifth overtime due to cramps. He was replaced by Ryan Fanti, who came in and made several huge saves after sitting on the bench for five hours. In total, 119 shots were taken, 142 minutes and 13 seconds ticked off the clock, and one record was set for the longest game in NCAA history on either the men’s or women’s side.

UMD now has a shot at its third straight NCAA title in a year that was supposed to be transitional for the Bulldogs.

UMD will be joined in Pittsburgh by UMass, St. Cloud State, and Minnesota State.

UMass reached the final in 2019, but at that time, they had the likes of Cale Makar, John Leonard, and Mario Ferraro, all of whom are now well on their way to successful NHL careers. This is another team that largely flew under the radar this season, but got hot at the right time, earning a Hockey East postseason championship along the way. Zac Jones, a New York Rangers draft pick, and Matt Kessel, a St. Louis Blues draft pick, make up the top defense pairing, and together they are quite exceptional.

St. Cloud lost one of its best offensive players in Easton Brodzinski in the team’s regional championship against Boston College. Brodzinski broke his leg on a nasty (but clean) hit when he cut to the middle of the offensive zone. The Huskies really aren’t built around their stars, though, as they’re an experienced team that has been through the wringer.

Minnesota State may be the most intriguing story of the Frozen Four field. The Mavericks hadn’t won a single NCAA Tournament game in their history before defeating Quinnipiac in the opening round, then following that up with a convincing victory over a favored Minnesota Gophers team.

Ryan Sandelin, son of UMD head coach Scott Sandelin, scored the overtime game-winner against Quinnipiac to keep hopes alive for a father-son showdown in the NCAA title game. Goaltender Dryden McKay has had dizzying numbers over three collegiate seasons and earned a 22-save shutout over the Gophers to send his team through. He was named a Hobey Baker finalist, along with Wisconsin’s Cole Caufield and North Dakota’s Shane Pinto. Shockingly, McKay is undrafted.

The NCAA semifinals will take place on Thursday, April 8, and the final will be on Saturday, April 10.

With so many NCAA teams seeing their seasons come to crashing halts, there was a flurry of signings of high-end NHL prospects this week.

Most of these players will need some seasoning in the AHL, but there’s some serious talent in the aforementioned group, so you should see at least some of them at the top level soon.

On the topic of signings, Thatcher Demko agreed to a five-year extension with the Vancouver Canucks worth $25 million, so apparently he isn’t a future Seattle Kraken after all. Bummer!

The superstars got a little chippy this week. Connor McDavid threw a VERY high elbow at Jesperi Kotkaniemi on Tuesday.

Connor McDavid is Connor McDavid, though, so although he’s been suspended in the past, he escaped this one with a $5,000 fine.

Refusing to be outdone by McDavid, Nathan MacKinnon got in on the fun by throwing Conor Garland’s own helmet at him on Wednesday.

I thought I was hilarious with my video alteration below.

The fine system is absurd. $5,000 is the most the NHL can fine a player based on the collective bargaining agreement with the NHLPA. McDavid makes $12.5 million per year. Do you know what $5,000 is to somebody who makes $12.5 million? Well, the median salary for all Americans is $31,133 according to the US Census Bureau. Fining somebody $5,000 when they have a $12.5 million salary is the same—in terms of percentage of income—as fining somebody who makes the median American salary exactly $12.44.

USA Hockey named Chicago general manager Stan Bowman and Minnesota general manager Bill Guerin as its GM and AGM respectively for the 2022 Winter Olympics in Beijing. The appointments come with a caveat that if NHL players do not end up participating, Bowman and Guerin will not lead the brain trust.

The “Fox Sports [insert your region here]” network of… networks… is no more, instead replaced by something called Bally Sports. Bally’s owns and operates casinos across the nation, so you can bet your bottom dollar (get it?) that there will be some sort of wagering-related programming and promotions coming soon to a Bally network near you. The scorebug on the newly re-branded Bally networks is obnoxiously large, so there is already plenty of space for live betting odds in regions where sports gambling is legal.

Shayne Gostisbehere was put on waivers by the Philadelphia Flyers this week. All 30 other teams passed on claiming the puck-moving defenseman, so he was assigned to the taxi squad. There was a time when we at Sound Of Hockey thought Gostisbehere could be a good fit for the Kraken. We still kind of think that, but we’re a tad more apprehensive now.

The University of St. Thomas has hired Rico Blasi as its head coach to lead the team’s transition from Division III to Division I next season, when the Tommies will join the newly re-formed CCHA. Blasi previously coached Miami University (Ohio), where he spent twenty seasons behind the bench and posted an overall record of 398–311–76.

The Canucks have Covid, and it sounds like this could be a lengthy shutdown for the team. It is not a good situation, as at least eight players have tested positive as well as at least one member of Vancouver’s staff. Here’s hoping for quick recoveries for all involved in this latest outbreak.

The Buffalo Sabres won a game!

Yes, the 18-game winless streak is finally over after a 6-1 drubbing of the Gostisbehere-less Flyers on Wednesday.

The very next night, Jeff Skinner had a stickless breakaway. The Rangers scored shortly after the below fiasco and ultimately won this one 3-2 in overtime to sum up Buffalo’s season quite nicely.

We leave you with former Seattle Thunderbird, Mat Barzal, scoring a trio of stunning goals on Thursday…