An oral history of the Seattle Thunderbirds 2017 WHL Championship Season: Part 2, the playoffs 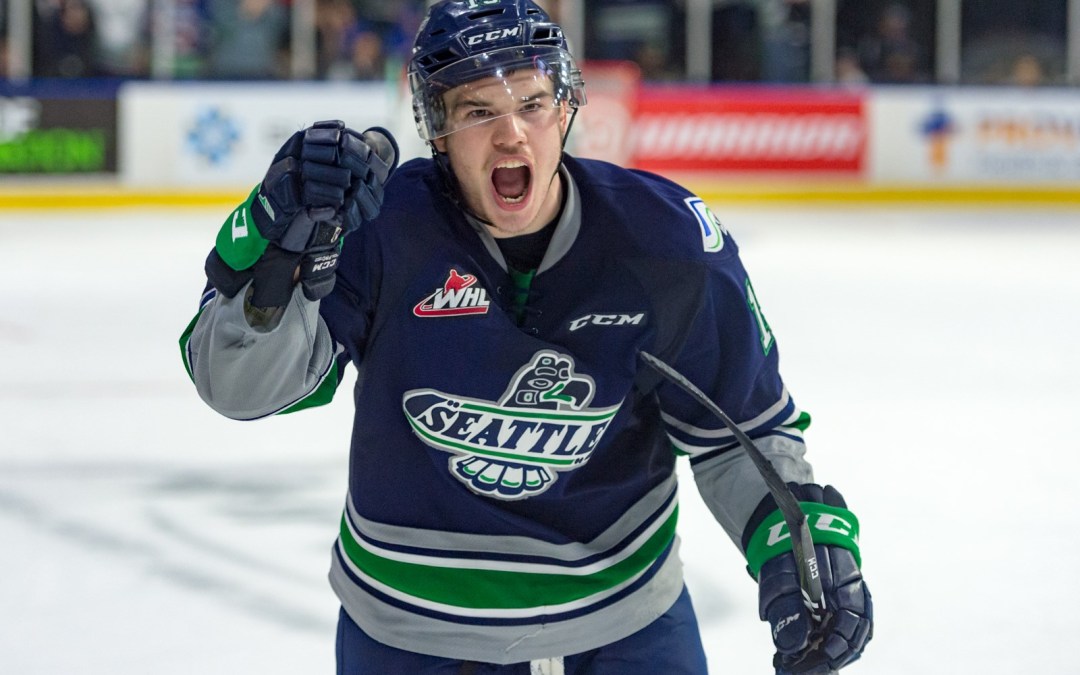 When we last discussed the Seattle Thunderbirds 2017 Championship run, the team was finding a way to win during the second half of the season and get into the playoffs. They had overcome injuries and reeled in the Everett Silvertips, who had previously built up a lead in the U.S. Division race.

The two clubs would take turns on top of the standings down the stretch.

With a couple of short weeks before the playoffs, Seattle faced another blow. It was a Friday night game at the ShoWare Center against Everett, and just as the national anthem was starting, Mathew Barzal skated off the ice and did not return. He would miss the next month of the season.

Donovan Neuls: I remember that clear as day, against Everett. Everybody was cautious because the mumps were going around. He just skated off. Everyone was a really worried.

Keegan Kolesar: I remember someone told me Barzy isn’t going. My immediate reaction was ‘Are you kidding me? Good joke, the guy doesn’t miss a game, there’s no way he’s missing this one.’ He missed the last while there and the first round of playoffs. We were happy he was ok but in the moment that really sucked.

Ethan Bear: We didn’t know how long he’d be out for. We thought he had the mumps, and we would have other guys going out later on. With Barzy, he stayed away from everybody, but we knew he was doing what he could to get back. Whenever you see a top guy go down like that it’s scary.

Austin Strand: That was very strange. It was a big game, and it was weird because he warmed up and all of a sudden, he’s being waved off the ice. We were all looking around wondering.

Turner Ottenbreit: That was crazy. I think I was on the ice for the anthem and skating around. He didn’t make it to the anthem.

Scott Eansor: You need the big guys and you need them to be healthy and whenever one of those guys is not healthy it’s a concern.

The Thunderbirds would come up just short of the U.S. Division Title

With Barzal out with what would later be learned was mononucleosis and not the mumps, the Thunderbirds continued to fight with Everett for the U.S. Division lead. The Silvertips would edge out Seattle for the title by one point, despite the Thunderbirds winning two more games. It meant that the Thunderbirds would not be the top seed in the playoffs.

Kolesar: We wanted the division title for sure. We were a confident team and felt that there was not a team that could beat us. It’s unfortunate we couldn’t get it but at the end of the day we got the whole thing.

Bear: We knew we were the better team. Everett played that shutdown style and we knew that if we met in the playoffs, we were confident that we could beat them. I think them winning the division gave us extra motivation.

Strand: We all kind of knew what a special team we had. We weren’t too worried about the banner at that point.

Neuls: Looking back on it now, it doesn’t mean much being that we got the big one. To be honest I didn’t care about the division so maybe it was good they beat us out by a point.

Not only did Seattle lose the Division title but a week before the playoffs, the Thunderbirds lost their goalie as well. Rylan Toth had come over from Red Deer in the offseason and won 36 games during the regular season. He got hurt, and Seattle turned to 16-year-old goalie Carl Stankowski to take over. The rookie had barely played during the regular season and now was the number one goalie heading into a first-round series with the Tri-City Americans.

Matt O’Dette: We were mindful he was a young guy. It doesn’t change a whole lot, but you want to dig in even more. That was probably the biggest adversity we faced, having your starter go down for the playoffs.

Bear: That was definitely another scare for us. As a player we knew how good a player Stankowski was. We let him be, he made the saves. He bailed us out more times than we helped him. It was definitely phenomenal what he did. Tother was there supporting him too.

Neuls: Going into the first game I think everyone was a little nervous. It didn’t take long to gain our confidence, he stopped like four or five breakaways and he didn’t let one in. For him to come in and play like he did was remarkable.

O’Dette: I think everybody in the building and on the bench, when we saw those breakaways there was a sigh of relief and feeling that Carl was up to the challenge. It gives me nightmares, those breakaways but that was a turning point.

Eansor: Everyone loved Carl, you couldn’t not. He was so innocent and nice and worked his ass off. It was really easy to stand behind him.

Strand: I was consistently shocked because he made massive saves. I thought he looked tiny back there, but he started making all the saves and we were confident.

With the rookie goalie standing tall, the Thunderbirds would sweep Tri-City in the opening round of the playoffs. Barzal and Ryan Gropp missed the series but Seattle didn’t miss a beat and dominated the Americans, including a blowout win in Kennewick.

Ottenbreit: They had some good players, so we weren’t too sure of what to expect. I think Donny [Donovan Neuls], Keegs [Keegan Kolesar], and [Alexander True] piled up points in that series.

Bear: That just shows you how deep our team was. I remember that last game we had three guys get five-point nights to seal the deal. A lot of us were joking [with Gropp and Barzal] we don’t want you guys to come back.

Neuls: I think everybody had a pretty good night that night. It was fun, happy we won.

Strand: I had never been on a playoff team that just swept right through a series. We got that longer rest to hang out and bond. We went to a Mariners game and then went into that Everett series.

After a first-round sweep, the Thunderbirds headed to Everett

The second round of the playoffs for the Thunderbirds would feature an anticipated matchup with the Everett Silvertips. Everett was the higher seed and opened at home. Seattle would get Barzal and Gropp back for Game 1 and set the tone when Barzal helped set up a late game-winning goal from Neuls.

Neuls: That was probably the biggest goal I had scored up until then.

Kolesar: We were pumped up, that’s the rivalry. I-9? I-5? I didn’t even know the highways when I was there. I was pumped, we took them out the year before, so we knew they were coming. I was really hyped.

Bear: We knew we were going to have to earn every inch in that rink. We dug down and gave everything we had in that series. They don’t give you much room in the D-Zone and it was challenging, plus they had Carter Hart.

Eansor: We always battled with Everett. It was always a hard, hard series. Despite the sweep it’s the hardest team to play in all of hockey that I’ve ever played. It takes a lot out of you to play them.

Ottenbreit: It’s always fun playing those guys. We hated them and I’m sure they hated us. Everett and Seattle are never going to like each other.

Kolesar: They were a tough team, and they weren’t going away at any point in that series. It was annoying, we would get a lead and they’d come back, and it was ‘Come on, just give up.’ It just makes it more fun when it’s a rivalry.

Bear: The way it all turned out it was one of the most fun series I’ve played.

Neuls: I think any time you can beat Everett, any time, you’re pretty excited.

In Part 3 of the Oral History of the Seattle Thunderbirds 2017 Championship, we’ll look at the Western Conference finals, another huge set back, the Regina Pats, and the big trophy.