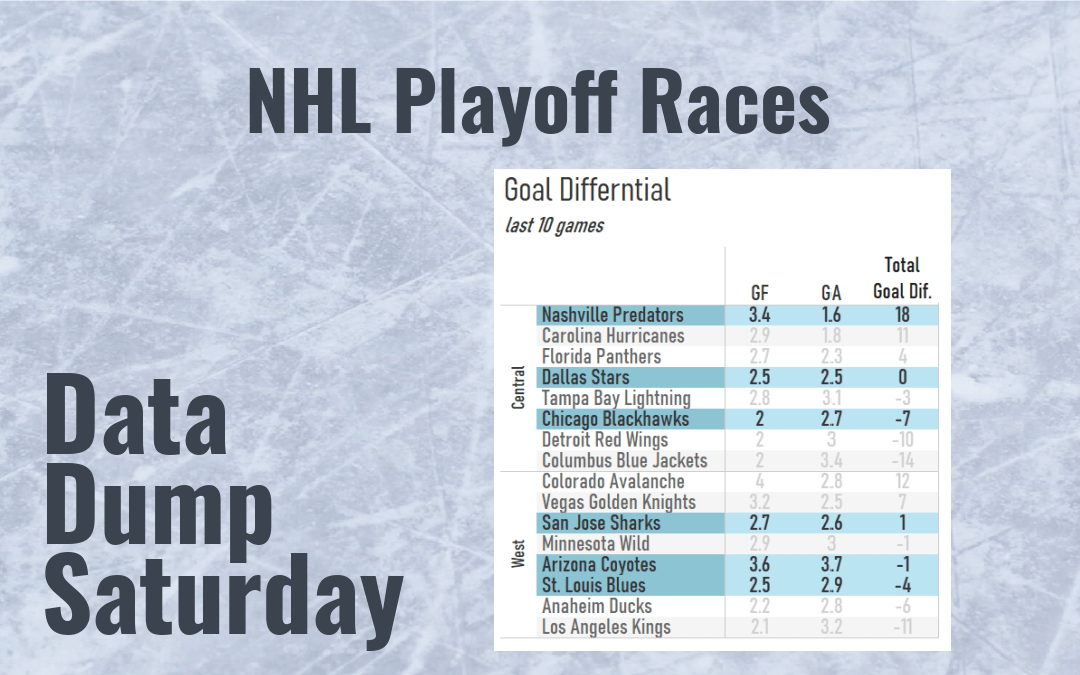 In this week’s Data Dump Saturday, I dig into the playoff races in the Central and West Divisions by looking beyond the points in the standings to get an idea of who might claim the fourth playoff spot in each division.

Earlier this week we did a round of Buy, Sell, or Hold on the Sound Of Hockey podcast where we discussed if Nashville or the San Jose Sharks were playoff bound teams. We talked about ‘games at hand’, ‘goal differential,’ and who is ‘hot’ right now as justification for our picks in qualifying for the playoffs.

Let us take a current and data-focused look at these two divisions with interesting playoff races.

For the more casual fans:

I am focusing on Arizona, St. Louis, and San Jose in the West and Nashville, Chicago, and Dallas in the Central. In my opinion, these are the only teams vying for the fourth and final playoff spots in their respective divisions.

Both San Jose and Nashville have made recent surges in the standings which have launched them into contention over the last few weeks. I want to see how these teams are trending by looking at their five-game moving average of point percentage.

In the chart below, you can see that Nashville has been outperforming Dallas and Chicago lately. Additionally, Chicago has been underperforming with a point percentage lower than 50 percent over the last 10 games.

In the West, you can see St. Louis underperforming has provided Arizona and San Jose the opportunity to be in contention in the playoff race.

It should be noted that we cannot assume that these trends will continue. There could be underlying conditions that are driving performance such as injuries, hot goalies, or coaching/strategy changes, but that is beyond the scope of this post.

Nashville appears to be reaching another level in goal differential, scoring 18 more goals than it has allowed over the last 10 games. If you look at the goals for and goals against numbers you can see Nashville is doing it with a combination of higher-than-normal goal scoring and being stingy with the goals allowed.

One of the first things I look at when trying to understand how well a team is playing is shot differential. It does not account for everything, but in general, if a team is producing more shots than the opposing team, then they are getting more opportunities to score. From a statistical perspective, it is a way to broaden the sample size instead of simply looking at the number of goals in a game.

It is a little surprising to see Nashville with a negative 18 shot differential because in goal differential they were (coincidentally) a plus 18. This would imply a heavy reliance on goaltending. A quick look at Juuse Saros’ stats and it shows that he is averaging less than 1.25 goals against average and a save percentage of .965 over his last 10 starts.

Chicago’s shot differential has correlated with their points percentage obtained over the last 10 games.

As we stated earlier, Arizona and San Jose have been playing better over the last 10 games that has created the opportunity to get back in this playoff race, but the shot differential of -31 and -27 respectively is a bit surprising. This would imply that they have been more effective with their shots (i.e. scoring at a higher rate) or that they are relying on their goaltending as well.

I focused on the last 10 games for these teams, but again, there is no guarantee that their trends will continue over the remaining ~16 games of the season. The next 10 games facing these teams will be critical considering several of them will play each other and the stakes will be that much more significant as they jockey for position in the playoff hunt.

Let me know your thoughts in the comments or how you would evaluate a team’s performance in the playoff race.