Is going all in at the NHL trade deadline worth it? 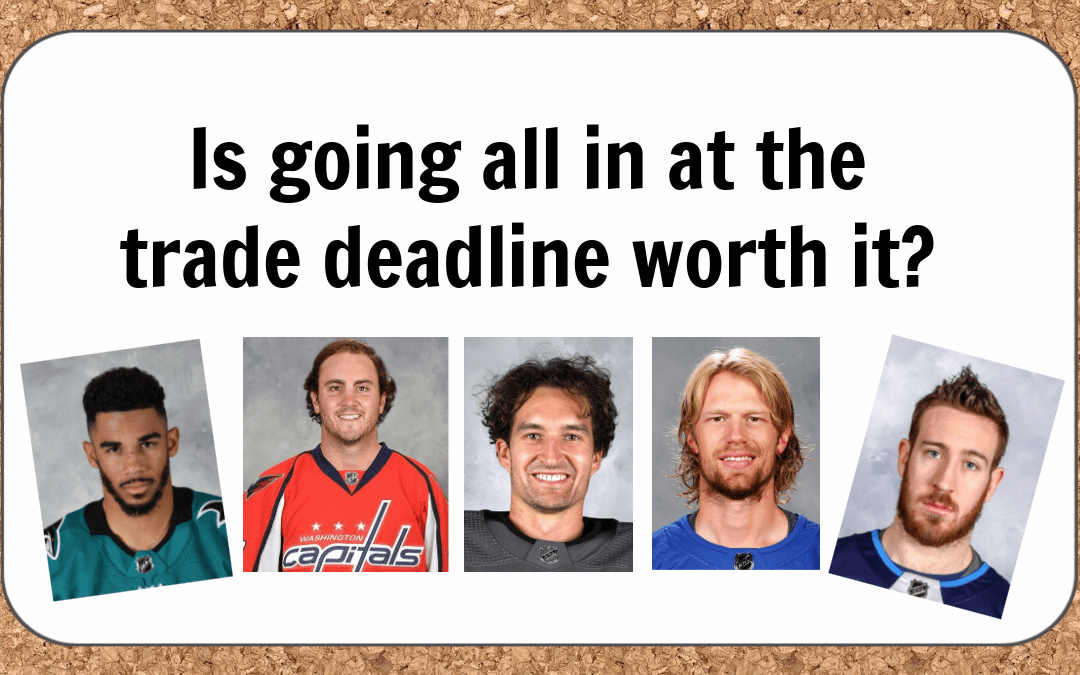 The NHL trade deadline is always a fun time for NHL fans. If our team is in the thick of the playoff picture, we hope it makes huge trades and pushes all our collective chips into the center of the table with hopes of playing for the Stanley Cup.

But is this the right approach?  Do we want to mortgage the future in hopes of acquiring the top player from the TSN trade bait board? Does it even work?

Against my better judgement, I went back and reviewed the last five trade deadlines of the Stanley Cup Finalists in hopes of clarifying if going “all in” is the right approach to the trade deadline.

The only notable move the Pittsburgh Penguins completed around the trade deadline was the acquisition of Justin Schultz from the Edmonton Oilers for a third-round pick.

At the time, the move was not thought to be very significant, and Pittsburgh did not give up much to get him. Schultz drew into 15 of the 24 playoff games for the Penguins and averaged just 13 minutes of ice time in those games, the lowest time on ice across all Penguins defensemen.

While Schultz did not play a significant role in the Penguins 2016 playoff run, he played four more seasons with the Penguins and contributed significantly to their 2017 Stanley Cup Championship.

The San Jose Sharks did not make any significant moves at the trade deadline in 2016. The team swapped back-up goalies with the Toronto Maple Leafs (Alex Stalock for James Reimer).

In a separate trade with the Leafs, the Sharks acquired Roman Polak and Nick Spaling for a pair of second-round draft picks. Polak played in all 24 of the Sharks’ playoff games but did not register a point. One of those draft picks turned into Maxime Comtois, who is having himself a pretty good season currently.

Other notable trades from the 2016 NHL trade deadline

The New York Rangers swung for the fences and acquired Eric Staal from the Carolina Hurricanes for two second-round draft picks and the signing rights to Aleksi Saarela. The Rangers lost in the first round of the Stanley Cup Playoffs and although it is still early to assess the prospects that Carolina acquired in the trade, they have only played a collective nine NHL games since being traded to the Hurricanes organization.

The Pittsburgh Penguins added Ron Hainsey at the trade deadline for a second-round draft pick. Hainsey logged the second-most minutes on the Penguins during the Stanley Cup Playoffs and pitched in with eight points across the 25 Penguins playoff games.

The Nashville Predators did not add any players of significance at the trade deadline.

Other notable trades from the 2017 NHL trade deadline

Kevin Shattenkirk was traded to the Washington Capitals with goaltender prospect Pheonix Copley for two prospects and two draft picks, a 2017 first-round and 2019 second-round pick. The St. Louis Blues defenseman was considered one of the prized targets of the trade deadline in 2017. Shattenkirk played fine for the Capitals in the playoffs, but Washington was eliminated by the Penguins in the second round of the Stanley Cup Playoffs. Shattenkirk signed with the Rangers in the ensuing offseason.

Perhaps learning their lesson from the big swing they took on Shattenkirk a year earlier, the Washington Capitals only added Michal Kempny at the trade deadline from Chicago for a third-round pick.

Kempny played in all 24 Capitals playoff games and averaged about 17 minutes of ice time per game. He did not show up on the score sheet that often, but he was an important depth piece for the Caps championship run.

Flush with draft picks from the 2017 Expansion Draft, the Vegas Golden Knights took a big swing at the 2017 trade deadline on Tomas Tatar. The Detroit Red Wings received three draft picks: a first, second, and third-round pick from Vegas.

In retrospect, the Tatar trade was a disaster. Tatar was a healthy scratch through most of the playoffs, appearing in just eight of the Golden Knights’ 20 playoff games. He was packaged up with Nick Suzuki and another draft pick in the offseason in a trade with Montreal for Max Pacioretty.

Vegas also added Ryan Reaves in a trade with the Pittsburgh Penguins. Although popular with the fans, Reaves only got into 10 playoff games and averaged only eight minutes.

Other notable trades from the 2018 NHL trade deadline

Tampa advanced to a game seven in the Conference Finals against the eventual Stanley Cup Champion Washington Capitals. McDonagh and Miller both played a significant role in the Lightning’s playoff success that year. McDonagh logged the second-most minutes behind Victor Hedman while Miller chipped in eight points over the Lightning’s 17 playoff games.

The San Jose Sharks traded a prospect and two draft picks (a first and a fourth) for Evander Kane. The Sharks were eliminated in the second round of the playoffs and Kane had five points in the nine games he played. The Sharks re-signed Kane in the offseason and currently leads the team in goals scored since he joined the Sharks organization.

Winnipeg acquired Paul Stastny from the St. Louis Blues for a prospect and two draft picks (first and fourth-round). The Jets were eliminated by the Golden Knights in the Stanley Cup Conference Finals. Stastny played very well for the Jets in the playoffs with 15 points in 17 games. He became a free agent in the offseason and signed with Vegas.

Rick Nash was traded to the Boston Bruins by the Rangers for Matt Beleskey, Ryan Spooner, signing rights to Ryan Lindgren, a first-round, and a seventh-round draft pick. The Bruins lost in the second round of the playoffs where Nash posted five points in 12 games, his final season in the NHL.

St. Louis Blues essentially did nothing at the trade deadline. They acquired Michael Del Zotto for a sixth-round draft pick. Del Zotto appeared in just seven regular-season games for the Blues and did not crack the lineup during their Stanley Cup Playoff run.

Coyle and Johansson had 16 and 11 points respectively in the Bruins playoff run. At the time Coyle had one additional year on his contract and signed a six-year extension with Boston that started with the 2020-21 season. Johansson became an unrestricted free agent after the 2019 playoff run and signed with Buffalo.

Other notable trades from the 2019 NHL trade deadline

The Vegas Golden Knights acquired Mark Stone from the Ottawa Senators for Oscar Lindberg, Erik Brannstrom, and a second-round pick. Stone signed an eight-year extension with the Golden Knights shortly after joining the team during the 2018-19 regular season. Vegas eventually lost to the San Jose Sharks in the opening round of the playoffs and Stone accumulated 12 points in seven games. Stone also leads Vegas in points since being acquired in 2019.

Winnipeg acquired Kevin Hayes for Brendan Lemieux plus a first and fourth-round draft pick. Winnipeg was eliminated in the first round of the playoffs where Hayes had three points over six games. Hayes entered free agency in the offseason and signed with the Philadelphia Flyers.

Both Coleman and Goodrow were considered modest trades when they happened but have been widely acknowledged as a significant reason why the Lightning won the Stanley Cup in 2020. Both of them logged about 18 minutes per game and were a major part of the team’s penalty kill in the Stanley Cup Playoffs. Goodrow logged the most penalty kill time on the ice (70+ minutes) amongst forwards for Tampa during the playoffs while Coleman was third in penalty kill ice time (~60 minutes) amongst forwards.

The Dallas Stars made no material moves around the 2020 trade deadline.

Other notable trades from the 2020 NHL trade deadline

New York Islanders acquired Jean-Gabriel Pageau for a first-round and second-round pick from the Ottawa Senators. Pageau signed a six-year extension with the Islanders shortly after being traded and had eight goals in 22 games in the Islanders’ playoff run to the Conference Finals.

The Hurricanes did not have one big trade, but they made a series of moderate trades in acquiring Vincent Trocheck, Brady Skjei, and Sami Vatanen in three unique deals.

None of them had much success in the playoffs but at the time of the trade, both Skjei and Trocheck had term remaining on their contracts and remain with the team this season. Trocheck is having one of the better seasons of his career.

Finally, the Golden Knights acquired their eventual playoff starting goalie, Robert Lehner, and also added a top-pairing defenseman in Alec Martinez with trades with the Chicago Blackhawks (with a little help from the Toronto Maple Leafs) and the Los Angeles Kings, respectively.

Both Lehner and Martinez played well in the Stanley Cup Playoffs for the Golden Knights before being eliminated in the Conference Final against the Western Conference champion Dallas Stars.

Is it worth it?

What are your thoughts? Do you recall a time where a team took a big swing at the trade deadline that paid off in the Stanley Cup Playoffs?