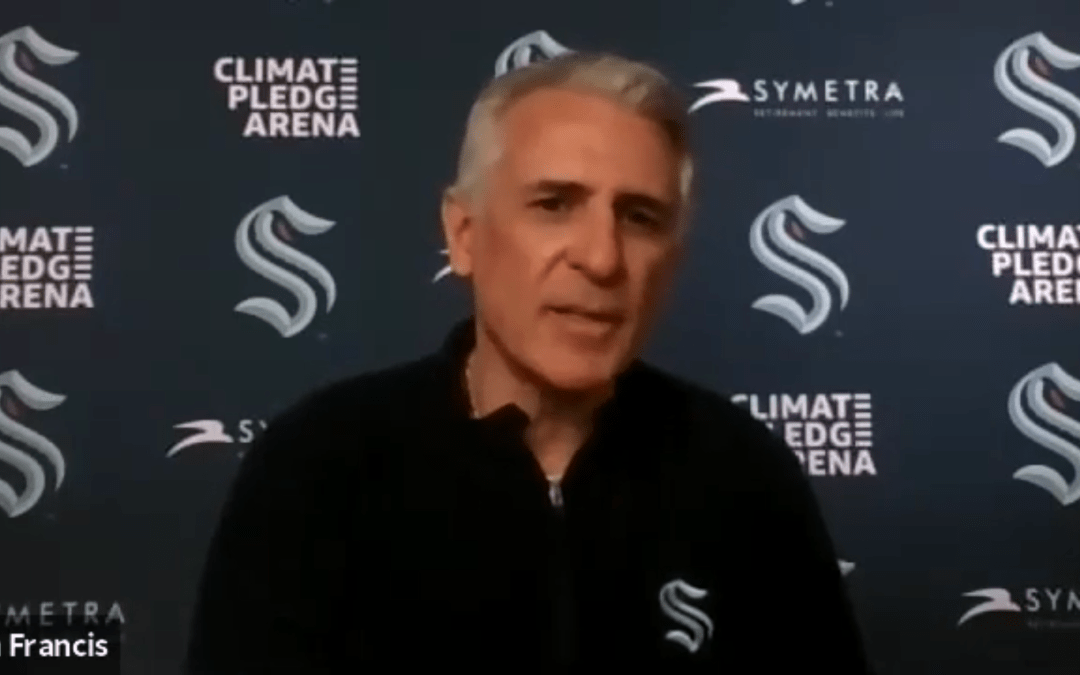 On Tuesday, the Seattle Kraken were kind enough to make general manager Ron Francis available to the media.

Francis kept things relatively diplomatic and unsurprisingly avoided any earth-shattering revelations. However, we did get some interesting nuggets out of the presser surrounding the Kraken’s plans for the NHL Draft, their goaltenders, their first head coach, and their AHL affiliate for the upcoming inaugural season.

Here is what we at Sound Of Hockey asked Francis and his answers to our questions.

Andy Eide: I had a question about the amateur draft. I’m curious about what your day-to-day involvement in that process of scouting is, and do you have a sense of the overall depth and talent of this year’s class?

Francis: Yeah, so I’ve been fairly involved. It’s tough to go to games; you can’t go to Canada because you gotta quarantine for two weeks and a lot of those leagues weren’t playing…

We’ve done a lot of homework basically via video and stuff. It’s going to be an extremely challenging draft for sure. There’s going to be players especially from the Ontario League that may have not played a game since last February or March, and you’re watching them on video; certainly challenging. Everybody is in sort of that same boat.

[Other teams] probably have a little bit more data on the players than we do. We certainly have some scouts with experience that have more data on players, but we don’t have the database that some of those other teams have, just on the fact that they’ve been in operation for two or three years.

John Barr: Obviously, you couldn’t make trades [prior to Monday’s NHL Trade Deadline], but there were trades made. There were a couple contract extensions and waiver claims. As a whole, how do you think Seattle did [Monday], and were there any surprises?

Francis: No, I mean, before the waiver claims we said there are two guys that would probably get claimed. It may not have been 100 percent on the actual team [that selected each player], but it goes by worst to best on who gets first choice on those waiver claims.

And then a lot of the guys that moved were guys for the most part that were UFA status… I think overall it wasn’t any huge surprises for us, per se, and we have already taken a look at where we think we have been affected sort of positively or negatively. And we will continue to look at that and evaluate as we move forward here and regroup as a whole and start preparing from here to July.

This is what we said all along. We can do a mock draft 12 months ago or six months ago, but until we get closer to that day and until we get to see that final list, it’s hard to project with 100 percent accuracy what we’re going to be picking from. But we’ll look at all the scenarios that we think might present themselves and be the best prepared as we possibly can be.

Darren Brown: Is there any chance whatsoever that the coach that you hire as the first coach is somebody who has not actually been a head coach in the NHL before?

Francis: I think I’m on record as saying I’d like a head coach that has been in that role before. I think it’s a tough challenge to bring everybody together in such a quick fashion and having a little bit of experience certainly would help in that regard.

Having said that, if there is somebody that hasn’t been a head coach in the NHL that auditions and interviews extremely well we’re not opposed to going that direction, but I think it is our preference to get somebody with head coaching experience if possible.

Brown: I’m wondering if you can just talk about your plans a little bit for your goaltenders; if you’re going to be using two veterans for example, or one veteran goaltender and one younger goaltender or a platoon situation. Any thoughts you might have on that?

Francis: The goaltending front is going to be interesting. You know, as we get into the last month here of the season, into the playoffs, we’re going to get a better read on some of the guys that might be available and who we think is the best fit for us. But you also have to factor in all the different options you’re going to have on different teams, and just because this [team] might have a goaltender doesn’t mean you will take that goaltender.

So ideally you get a guy that’s lights out as your starter and a great number two. Maybe you go with two ‘1-B’s,’ maybe you go with one veteran and a younger guy. I think that remains to be seen. I think we’re open to evaluating all those different scenarios and certainly our goalie scouts have been working hard in addition to our pro staff to indicate which guys we should be interested in and our analytics team is working hard behind the scenes to see if they can figure it out as well.

Doing a lot of things and hopefully we get the right two guys to stop pucks when we get to that point.

Eide: I had a question about your American Hockey League situation. How much progress has been made or is there a timeframe for identifying an affiliate for your players to play on next fall and do you prefer them to be on one team or to be spread across more than one team?

Francis: Yeah, so we’ve had a lot of conversations with different teams. Ideally we have it with one team, and we are in talks with a specific team currently; we’ll hopefully get that wrapped up sooner rather than later. And if we can do that, we put everybody in one spot ideally.

In Ron we trust.

You can view Francis’s media availability in its entirety here.