Data Dump: Fighting in the NHL 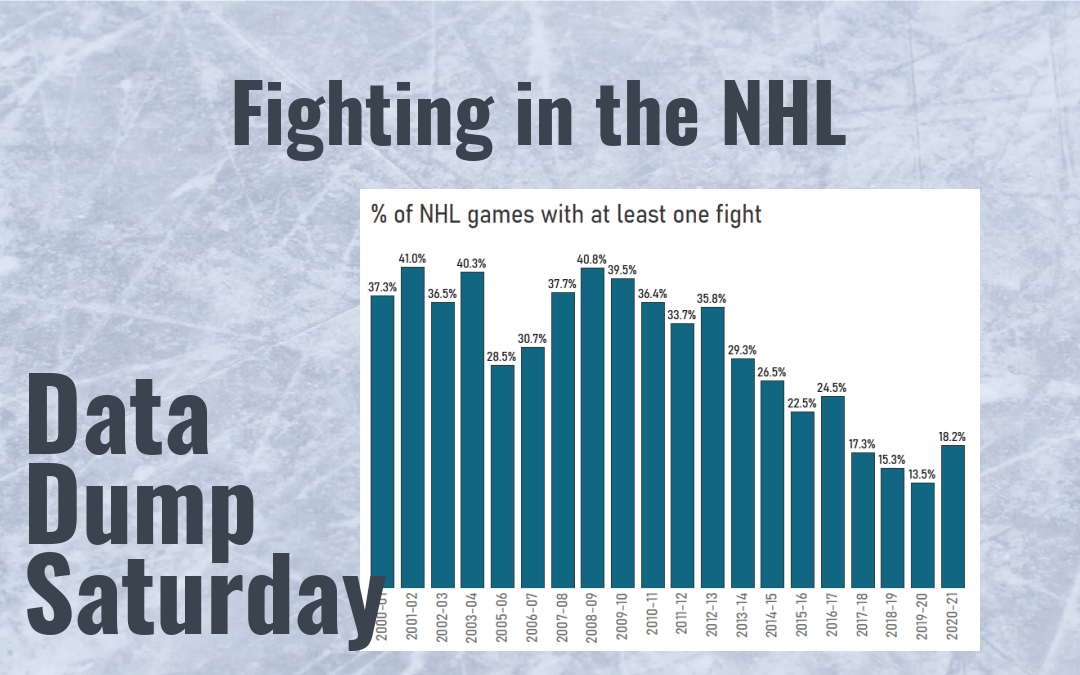 Earlier this week Greg Wyshynski published an interesting piece on ESPN+ on fighting in the NHL during this pandemic-impacted season. He talked to Nicolas Deslauriers of the Anaheim Ducks about the mentality of engaging in pugilistic activities with no fans in the building during this unorthodox campaign. It is a great piece, so check it out if you can.

The article referenced how fighting is up this season. It triggered me to look into how this aspect of hockey has changed in the NHL over the last 20 years for this week’s Data Dump Saturday.

Over the last 20 years or so, fighting has been going down across the league as traditional “enforcers” have been replaced by younger, more skilled players.

The reasons for the decline of fighting are beyond the scope of this post, but it comes down to a combination of stricter penalties for fighting, awareness on long-term impacts of repeated concussions, and data supporting that skill on the fourth line is more valuable than enforcers.

The increase we have seen in 2020-21 could come from the heightened tensions associated with the all intra-division format in this unique regular season. Teams are playing their divisional rivals more frequently versus the traditional cross-league schedule in which they would face certain opponents less frequently.

Impact of fighting on team performance

Here is how fighting breaks down by team and division in 2020-21.

On one side of the coin you have two of the worst teams in the league this year in Anaheim and Ottawa leading their respective divisions in percentage of games with fights. On the other side, the Buffalo Sabres, a comparable bad team, have close to the fewest games with fights.

Additionally, Tampa Bay and Florida are two of the better teams in the Discover Central Division and are also the top two teams in the division in percentage of games with fights. The summary is that fighting does not correlate to winning or losing records in the NHL.

Fighting in the NHL by player

Looking at the drop in the number of players participating in fights in 2020-21 is a bit misleading. The season is not complete, and even when it wraps up in May, it will be shorter than previous campaigns. The net result is that this gives less opportunity for players to get in a fight.

Again, the drop in the 2020-21 numbers of players participating in multiple fights could be misleading for reasons stated above, but the consistent drop over time can be attributed to the fact that there are no longer players that are in the league exclusively for fighting.

Here is a look at the fight leaders in the NHL this season.

It’s interesting to see a player like Brady Tkachuk leading the league in fights this season because he also is tied for the lead in points on the Senators with 30 as of April 24. Tkachuk is a good example of the shift away from the dedicated enforcer role. Austin Watson and Deslauriers may not have the offensive skill that Tkachuk has, but they still contribute with .29 and .22 points per game, respectively.

To help understand how the makeup of players fighting in the NHL has changed, let us now compare the top 10 fighters from the 2000-01 NHL season.

The number of fights these guys had in that single season is the first thing that stands out. Even if you doubled Tkachuk’s six fights and extrapolated that to a full season, it is still less than half of Andrei Nazarov’s 27 fights in 2000-01. Nazarov had only six points in 79 games that year. Of the list of top 10 fighters, only Matthew Barnaby and Tie Domi contributed beyond the fighting and intimidation role the others played in their careers. This validates the theory that we are seeing fewer and fewer one-dimensional enforcers in the league now.

Although fighting is indeed up this season compared to last, supporting Wyshynski’s comments, there are still indicators that fighting in the NHL has fundamentally changed. Even a small increase in games with fights this year is probably not a strong indicator of any changes to the trend we have seen over the last 20 seasons.