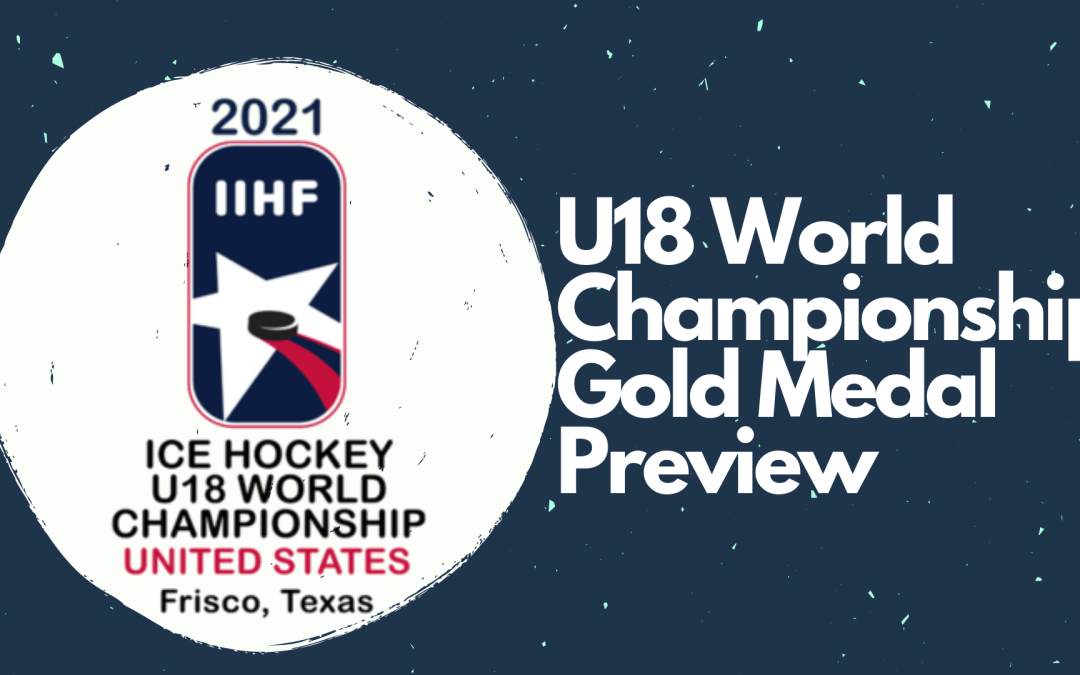 When it comes to hockey rivalries, Canada and Russia is one of the best. The two countries have played epic games on the international stage and will write the next chapter Thursday night in Texas when they play for the gold medal of the IIHF U18 World Championships.

The U18 tournament features many top 2021 NHL Draft prospects as well as some unbelievably talented players who will be featured in the 2022 and 2023 Drafts.

Canada has breezed through the tournament so far, unbeaten and outscoring its opponents by an absurd 46 to 9 margin. It’s a deep squad loaded with future NHL talent and one of the deepest teams the Canadians have brought to the U18s.

We’ve heard this before, though.

At the 2021 World Juniors, Canada looked invincible, with a roster of first-round NHL picks. Surely nobody would stop them. That was the narrative heading into the gold medal game and yet the U.S. ended up skating away with the prize.

This time it’s the Russians who will try to upset the seemingly unbeatable Canadians. Will they do so? They have talent but will have to play a near perfect game Thursday night. The game starts at 6 PM Pacific time and will be broadcast on the NHL Network.

Canada versus Russia for U18 gold

After ripping through the preliminary rounds, Canada advanced to the gold medal game with a pair of seven-goal wins. They beat the Czech Republic 10-3 and Sweden 8-1. The game against Sweden was closer than the score appeared as Canada led 2-1 through 40 minutes. With the way Canada has played, that’s what constitutes a close game in this tournament.

The Russians tied Finland in points during the preliminary rounds but lost out on the top seed due to a head-to-head shootout loss. They had a taste of revenge by beating Finland in a thrilling 6-5 semi-final contest. Prior to that, they had taken care of Belarus, 5-2. Russia has played exciting games during this tournament and won’t be a pushover here. They’ve already erased a 5-1 deficit against the United States to hand the Americans a heartbreaking loss early in the tournament.

Canada-Russia by the numbers

It should be no surprise that the two teams fighting for the gold medal have some impressive numbers. Despite Canada routing all of its opponents, Russia boasts the best shooting percentage as a team at 18 percent, but Canada is right behind them at 17. Both squads are far and away the best shooting clubs in the tournament which could lead to some explosives Thursday night.

Special teams are always a factor in gold medal games and Russia and Canada feature the top two power-play units in the tournament. Russia’s is clicking at 43 percent while Canada is just a tick below at 42. Russia will need to be disciplined in this game as their penalty kill was not as good (75%) as Canada’s (85%) and too many kills could lose the gold medal.

The top two scorers in the tournament are both Russians. Captain Nikita Chibrikov has 13 points and is tied with teammate Matvei Michkov – 11 of his points are off goals. Canada’s Connor Bedard (12 points) and Shane Wright (11 points) are third and fourth in scoring, respectively.

It would be easy to list the entire Canadian roster here as their chances to grab U18 gold against Russia lay in the hands of a talented roster that has depth through all four lines.

For Kraken fans, forward Dylan Guenther, Brandt Clarke, and Mason McTavish are just three players who are projected as first-round picks in the range of when Seattle will pick in its first Draft. In particular, Clark — who normally plays with the OHL’s Barrie Colts but played in Slovakia this year due to the OHL season being canceled — has had a strong tournament and could see his stock on the rise.

Local fans will want to keep an eye on Seattle Thunderbirds forward Connor Roulette, who has six points in six games, and Everett Silvertips defenseman Olen Zellweger, who has seven.

Russia also has NHL talent on its roster, most notably its two leading scorers.

Chibrikov is a speedy two-way and fluid center projected to land in the first round. Another first-round prospect is Fyodor Svechkov who has checked in with 10 points for the Russians. Svechkov is another fantastic two-way center who will have his hands full against Canada in the gold medal game.

The future of the future

Both Canada and Russia have younger players who will not be eligible for the NHL Draft this year but in the coming years. These guys have been electric and have put on a show during the tournament in Texas.

It’s a U18 tournament which means that 15-year-old Bedard could be and was invited for Canada. The Regina Pats phenom is the first player ever to be granted exceptional status in the WHL and after leading the league in scoring there, he’s come to Texas and has led Canada. He’s as dynamic a player as you’ll see in this game and turned in a hat trick during Canada’s semi-final win against Finland. Bedard is eligible for the 2023 NHL Draft and is already being talked about as the top pick.

Not to be outdone, Canada’s Wright, 16, has been equally impressive. He’ll be eligible for the 2022 Draft and already looks like the No. 1 guy. Wright was named Canada’s captain for this tournament, which is exceptional by itself, but then you watch the guy play and he does it all. He can score, play in his own end, he’s on the Canadian power play, and he kills penalties.

Russia also has a 2023 eligible player in Michkov. At 15 years old, he’s exploded on the scene during the U18s, leading the way with 11 goals. He’s got size for a guy his age and could give Bedard a push for that top Draft spot in two years.

Obviously, it took good goaltending for Canada and Russia to reach the U18 gold medal game and both clubs have it. Russia’s Sergei Ivanov will get the call in net Thursday and will bring with him a 2.36 goals-against and a .920 save percentage.

On the Canadian side, Seattle Thunderbirds goalie Thomas Milic started two games in the preliminary rounds – only allowing one goal – but will serve as the backup goalie for Canada in the gold medal game. Instead, Canada will go with Benjamin Gaudreau, who started both playoff games. Gaudreau has only allowed eight goals in six games with a save percentage of .922. Playing for the OHL’s Sarnia Sting, Gaudreau had not played in a game all year, making his U18 performance that much more impressive.