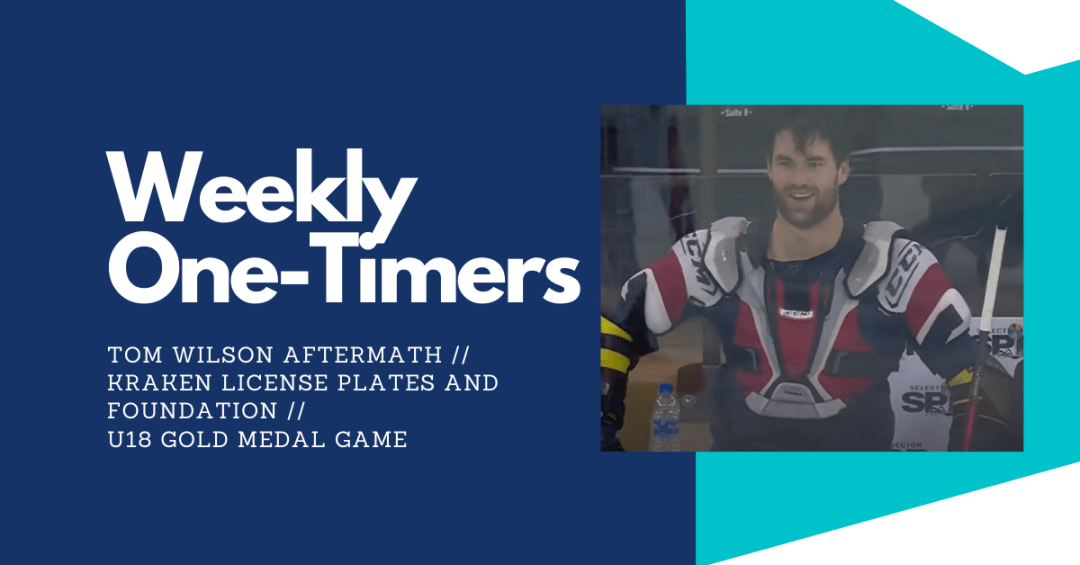 You said there are no soap operas in the NHL, but holy cats, has this last week been a soap opera in the NHL. The cast of this week’s episode features the New York Rangers, the Washington Capitals, the NHL Department of Player Safety, Gary Bettman, George Parros, James Dolan, Jeff Gorton, John Davidson, Chris Drury, and—at the center of it all—Tom Wilson, whose actions and lack of suspension caused this whole thing.

More on this in a bit.

Before we really peek under the circus tent that has been installed where Madison Square Garden once stood, let us chat quickly about what is happening on the Seattle Kraken front.

The moment you’ve all been waiting for has arrived! Yes, the Seattle Kraken’s first act as the official 32nd franchise in the NHL is…

The plates range in cost from $59 for a motorcycle with any random jumble of letters and numbers up to $129 for a passenger vehicle with personalized plates. For what it’s worth, I have dibs on CRAPWSL for my plate, so please keep your filthy tentacles off of that one.

25% of the fee goes to Boundless Washington, while the other 75% goes to the One Roof Foundation.

And what’s the One Roof Foundation, you ask? Why, it’s the newly announced official philanthropy arm of the Seattle Kraken and Climate Pledge Arena, of course!

The One Roof Foundation focuses on three pillars: fighting youth homelessness, making hockey more accessible, and environmental justice. We at SOH are very excited to see what impact the Kraken can have on the community, and the foundation will certainly be central to those efforts.

The team also tweeted pictures of the ice slab going in at Climate Pledge Arena on Friday. It’s starting to look legit, folks!

In other Kraken-related news, Milan Lucic agreed to waive his no-move clause to allow the Calgary Flames to protect an additional player in the Expansion Draft. That’s bad news for Seattle, which we believe will now be choosing between Oliver Kylington and Mark Giordano.

In case you were paying zero attention to the NHL or Hockey Twitter this week, we will fill you in on what happened with the aforementioned cast of soap opera characters. Spoiler alert: it was a doozy.

A net-front melee erupted in the first of two consecutive meetings between the Rangers and the Capitals on Monday. Tom Wilson shoved Pavel Buchnevich’s face into the ice, then Artemi Panarin jumped on Wilson’s back. Wilson grabbed Panarin by the hair and threw him like a ragdoll, then gave him the same treatment that he had given Buchnevich. Wilson then flexed in the penalty box. Panarin will not play for the rest of the season, but it doesn’t sound like he was seriously injured (he certainly could have been).

On Tuesday, Department of Player Safety director George Parros opted to simply fine Tom Wilson $5,000, rather than handing him a suspension for at least the next game between the two teams.

Later that day, the Rangers issued one of the strongest official statements ever made by an NHL club.

On Wednesday, James Dolan, the owner of the Rangers, fired the team’s brain trust, replacing Jeff Gorton and John Davidson with Chris Drury as the new general manager. Dolan claimed the firings had nothing to do with the statement the team had issued, but it’s impossible to ignore the timing of the moves.

Oh, then the two teams had to play each other again on Wednesday night!

In all, 141 penalty minutes were assessed during the game.

Somewhere hidden deep within all this bizarreness was the story that TJ Oshie was playing Wednesday in his first game since the passing of his father, Tim, lovingly known throughout the hockey world as “Coach.”

So what did Coach’s son do? He rose above the terrible mess that was happening all around him in that game to score a hat trick.

Oshie was visibly emotional and was embraced by his teammates in a way that you rarely see in professional sports. It was perhaps the most beautiful story of the year, and yet it was oddly overshadowed by a bunch of guys punching each other.

The off-ice ugliness picked up again on Thursday, as the NHL fined the Rangers $250,000 for their public comments directed at Parros, and—in perhaps the most ironic twist of all—suspended Buchnevich for one game for cross-checking Anthony Mantha in the face during Wednesday’s Broadway Brouhaha.

You seriously cannot make this stuff up.

If the league had simply suspended Wilson for a game—which folks would have argued was either unjust punishment or not nearly enough because you can’t please everyone anyone—then this all would have been nipped in the bud.

Emily Kaplan summed it up perfectly on ESPN’s Around The Horn.

Man, a Tom Wilson suspension sure looks sweet in retrospect.

Canada defeated Russia 5-3 in a thrilling gold medal game at the IIHF U18 World Championship on Thursday.

Bedard, 15, is the first player ever to be granted exceptional status to join the WHL early and showed on a big stage why scouts are clamoring for this kid. With 14 points, Bedard tied for second in the tournament scoring race with teammate Shane Wright. Wright and Bedard finished behind only Russia’s 16-year-old future superstar, Matvei Michkov, who notched 16 points (12-4=16) in just seven games.

Everett’s Olen Zellweger had a huge tournament on Canada’s blue line with a goal and seven assists. Seattle’s Conner Roulette had two goals and three assists, while netminder Thomas Milic posted a 2-0-0 record with a .975 save percentage and .50 goals against average but did not play in the playoffs or gold medal game.

Recently on the Sound Of Hockey Podcast, we surmised that—because the operator of the Utica Comets had filed a new trademark for the brand “Utica Devils”—there was some AHL shuffling on the way.

The Utica Comets, Vancouver’s top affiliate, are re-locating to Abbottsford, British Columbia, while the Binghamton Devils, New Jersey’s AHL franchise, are moving 90 miles north to Utica. I can’t help feeling for the people of Binghamton, but the moves make sense, at least on paper.

The Canucks having their top prospects playing thousands of miles away and in a different country was never a good plan and created even greater challenges during this pandemic. But AHL hockey in Abbottsford has been tried before and did not work, as the Heat only lasted five seasons there with low attendance.

Perhaps the fact that the NHL and AHL teams of the same organization will be playing within the same province will make it more successful this time around?

With the new national TV deals coming next season, broadcaster hirings at TNT/TBS and ESPN are starting to trickle in. Kenny Albert and Eddie Olczyck will be the lead team for Turner Sports, while Craig Morgan has reported he believes Ray Ferraro will be the lead analyst at ESPN.

David Backes is likely to retire after this season. His Anaheim Ducks visited St. Louis on Wednesday, where Backes played 10 seasons and served as captain for five. Backes gave Darren Pang an all-time post-game interview on Wednesday, which was played over the public address system in the arena.

Marc-Andre Fleury recorded his 490th career NHL win on Wednesday, surpassing Roberto Luongo and giving him third place on the all-time list. That’s not bad for a guy who was selected by the Golden Knights in the Expansion Draft after the Penguins sent an extra draft pick to persuade Vegas to take him.

As a huge Felix Potvin fan as a child, I very much approve of David Rittich’s new look.

There’s something a little trippy about seeing the outline of the old Koho crosshairs logo on a pair of CCM pads, but man… this was beautifully done.

Who wore it better?