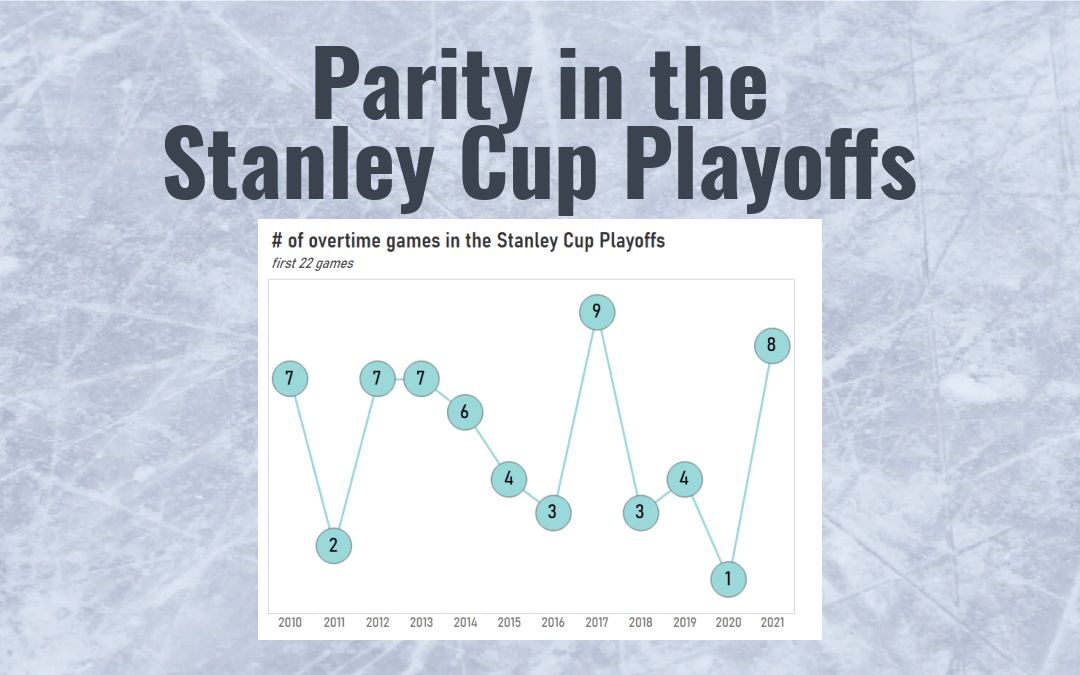 In my world, nothing beats overtime hockey in the Stanley Cup Playoffs and without a rooting interest in this year’s Playoffs, I can enjoy it without having heart palpitations. This year’s Playoffs kicked off with three straight overtime games and last night the hockey gods treated us with two more overtime games. For this week’s Data Dump Saturday, I am going to look at how this Playoff season is tracking in various categories to previous years.

As the chart shows, this year we have seen an above average number of overtime games through the first 22 games with eight. It is important to call out that the NHL categorizes last year’s play-in round as playoff games and for the purposes of this post, they are also categorized as playoff games.

Historical goal differential might be a bit misleading considering the trend of pulling the goalie earlier in the third period to get an extra attacker when a team is down. By the down team pulling their goalie earlier provides more opportunity, i.e. time, for the team that’s up to score and thereby increase the differential.

Here is a look at the empty net goals scored in the first 22 games.

This increase of empty net goals will contribute to a higher goal differential that might mislead to show that games are not as close as they really were. Game analytics support pulling goalies earlier leading to overtime games and thereby improving a team’s chances of winning. For more on this I would suggest you check out the great work by Meghan Hall on pulling goalies.

Between the quantity of overtime games and the smaller goal differential, it appears there is a parity across the teams. The divisional playoff format might explain some of this parity. Traditionally, the best regular season team in the conference plays the lowest qualifying team in the conference, a one seed vs eight seed. The 2021 Stanley Cup Playoff format has the one seed playing the four seed inside the division. Mathematically this will create match ups of teams of closer ability. However, with a regular season schedule that was made up of exclusively divisional opponents, it is difficult to draw any conclusions from this format, but it makes you wonder if we should see this division playoff structure in the future.

For now, let’s just root for more overtimes and hope for some game sevens.