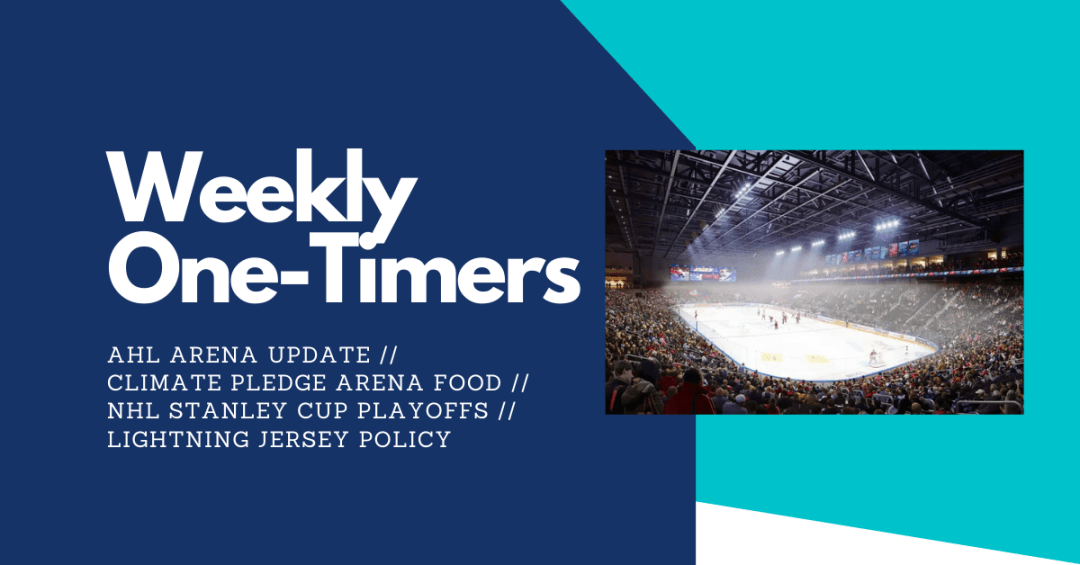 The first round of the Stanley Cup Playoffs is all but wrapped up, with just one series still underway. It has been a doozy of an opening foray into the postseason, with everything you could possibly want from goalie duels (what most fans are obviously seeking) to high-scoring affairs. And for those of us in Seattle, it is impossible not to daydream about the fact that the Kraken could very well be participating in this tournament just one year from now.

While you’re attending said playoffs next season, it’s totally within the realm of possibility that you’ll work up an appetite while screaming your face off, drinking your $12 Coors Lights (we don’t actually know the prices of beers, but we assume they will be high), and relentlessly swinging your Tentacle Towel (patent pending) around your head. Well, fear not for hunger, because the Kraken and Climate Pledge Arena announced a few of their food vendors this week, and the options are going to be pretty legit.

It feels like it has been a long time since we’ve had any update on arena construction for the Kraken’s top minor-league affiliate in Palm Springs. There has finally been some publicly visible progress this week, as Oak View Group has planned a groundbreaking ceremony for Wednesday, June 2.

The Coachella Valley Arena is expected to cost $277 million and will have a capacity of up to 11,700, depending on the event.

Friend of the Sound Of Hockey Podcast and broadcaster for the Seattle Kraken, Everett Fitzhugh, threw out the first pitch at the Mariners game on Friday. Word around the campfire is he bounced it in low, but we won’t hold it against him.

Being a Wild fan is a sad and lonely place. Minnesota was ousted in classic first-round fashion Friday after an exciting series with the Vegas Golden Knights that went to a Game 7. Even I can see, though, that the hockey world has been clamoring for a Vegas-versus-Colorado matchup, and even I can admit that it has the makings for an all-time series. T-Mobile Arena in Vegas will also be back to 100% capacity, so prepare to have your face rocked off.

The other series matchups that have been set also have potential to provide incessant thrills. Top divisional seed Carolina takes on the defending champion Tampa Bay Lightning, while the Bruins will take on the Islanders, who have surprised once again. In the North, Winnipeg will face the winner of Toronto and Montreal, set to play Game 6 at 4:30 P.M. Pacific on Saturday and Game 7 (if necessary) on Monday.

All three U.S.-based series will get underway this weekend, with Boston and New York kicking things off at 5 P.M. Pacific on Saturday.

Gretzky signs on with Turner

It had been rumored for a while that Wayne Gretzky was considering joining one of the two new national rightsholders’ broadcast teams. The Great One did officially sign on this week as a studio analyst for a reported $3 million per season with Turner Sports after ESPN had also courted him. Gretzky had apparently been serving as vice chairman of the Edmonton Oilers (which few in the hockey world knew) and has stepped down from that role to accept the deal.

We at SOH are excited to see such an important voice in the hockey world coming back to the forefront, but we also wonder how engaging Gretzky will be. At the end of the day, we want the national coverage to bring enthusiasm, energy, and fun to the intermission shows, and those aren’t personality traits that immediately jump out when you listen to Gretzky speak. Still, he’s the best player of all time, and he’s done everything one can possibly do in the sport, so he should at least have some great insight.

There’s something exhilarating about donning the sweater of a visiting team and loudly cheering for them while in hostile territory. I’m not the “get drunk and fight people because their fandom doesn’t perfectly align with mine” type, but I am the “get drunk and talk a little smack to those around me without pushing too hard because I don’t want to get beaten up” type.

But how can you be that person if the visiting building has an asinine policy in place that doesn’t allow you to wear your team’s gear to the game?

A Florida Panthers fan posted a video of himself and his 11-year-old son being approached by team security during the opening round of the Stanley Cup Playoffs, and in the conversation one of the security officers goes so far as to threaten to bring in the Tampa Police Department.

The Lightning have now retracted the very stupid policy.

Having visiting fans in your building is part of sports, and it adds to the intensity of an important game. What a ridiculous idea this was in the first place. Good riddance.

“Robert Morris University announced today it will no longer field NCAA Division I men’s and women’s ice hockey teams as part of a series of strategic initiatives intended to position the university to be amongst the most agile and professionally focused schools in the nation as it prepares for its upcoming 100th anniversary.”

Man, what an opening to a statement about eliminating a sports program that has helped hundreds of young men and women achieve their dreams.

We always root for hockey to succeed at every level and in every market. We also fully understand that universities have budgets, and hockey isn’t always the highest priority within those budgets (especially after a year like the one we’ve just experienced). But delivering such devastating news under the guise of a centennial celebration feature is quite the groin kick for current and former players, coaches, and staff of the program.

A petition to save Colonials Hockey gathered more than 16,000 signatures, but this sounds like a done deal, at least for now.

After a very scary incident last week involving the face of John Tavares and the knee of Corey Perry, the Toronto captain was back on the ice Thursday.

There’s another Kraken in the neighborhood, as the Lake Cowichan Kraken are set to join the Vancouver Island Junior Hockey League as its tenth franchise. Nobody tell the Kraken Bar & Lounge.