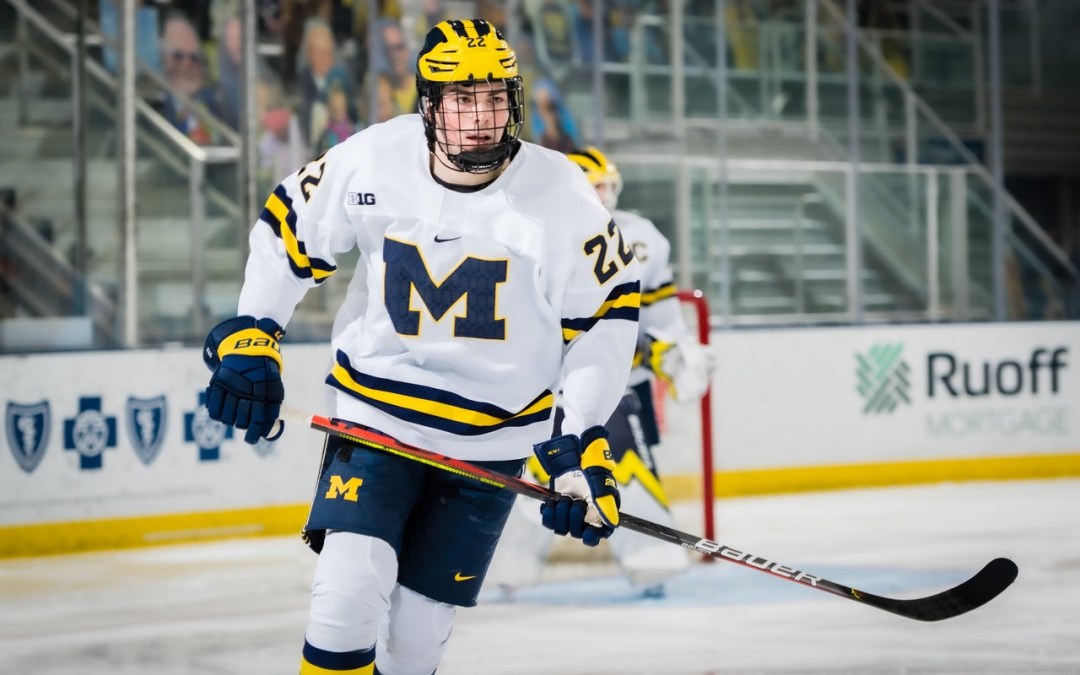 In the months leading up to this year’s NHL Entry Draft, we’ve been told by the various draft experts that there is no definitive, sure-fire top prospect on the board. Yet, despite that narrative, University of Michigan defenseman Owen Power is ranked No. 1 on most draft projections, making him, it would seem, the closest thing to a consensus No. 1 pick. The only opinion of Power that matters is the one held by the Buffalo Sabres, who will be picking first during the July 23 NHL Entry Draft. If they pass then Seattle Kraken general manager Ron Francis will have a choice to make, and one that could land Power in Seattle.

Defensemen don’t go first overall very often and since 2000 only three have – Rasmus Dahlin to Buffalo in 2018, Aaron Ekblad to Florida in 2014, and Erik Johnson to St. Louis in 2006 – which means that Power being available at the second pick is not far fetched.

The first thing that stands out about Power is his size. He’s listed at 6-foot-5 and 214 pounds, which is not quite as big as a Victor Hedman but puts him in that range.

Power was one of three top draft prospects at Michigan last year, joining Kent Johnson and Matty Beniers. Growing up in Mississauga, outside of Toronto, he could have chosen the Major-Junior route but instead had his eyes focused on college and Michigan.

“You see how historic the hockey program is here, how many good players that came out of it,” Power said of his decision during the Wolverines media day in the fall. “With the school part, it’s a really good school… I always knew I wanted to go to college, play college hockey. School’s a big part of our family, and my parents really believed in going to university. I also think just there’s more time to develop in college than Major Junior so I think that also played a part in it.”

College or Junior, Power now has himself positioned to be a high-end NHL Draft pick.

Owen Power by the numbers

Power began his NHL Draft journey in the USHL, playing for the Chicago Steel. He spent two seasons in the Windy City and finished with an impressive 12 goals, 28 assists, and 40 points in 45 games during his final season of 2019-20.

That would turn heads, and he was soon being praised as a top player for the 2021 NHL Draft. His freshman season did nothing to assuage that perception.

Playing against predominantly older players at the NCAA level this season, Power added 16 points in 26 games, which put him on the Big 10 all-rookie team. Already ascending the draft rankings, Power further solidified himself by playing for Canada at the IIHF World Championship in June.

He was one of the youngest players in the tournament, and playing against established pros, he collected three assists in ten games while drawing praise for his overall performance against tough competition.

“He’s calm with the puck for an 18-year-old,” Canada head coach Gerard Gallant said. “He made the right decisions 95 percent of the time. He’s a total package. He played big minutes so when an 18-year-old kid can come in and do that, you know he’s going to be a great player in the NHL for a long time.”

Obviously, Power’s size is attractive to NHL scouts. It’s not something that can be taught, and he will fit right in on an NHL blue line. However, despite that size, he’s not yet a bruiser, and that is something that could improve as he moves into the more physical pro game.

He has good skating ability, especially for a player of his stature, and can move the puck. Power has offensive upside and has put up numbers wherever he has played. You can pencil him in to be part of your power play if you draft him.

“Probably a top pairing guy,” Hockey Sense’s Chris Peters told the Sound Of Hockey Podcast. “He’s not a lock to be a No. 1 defenseman, but I think that he is. He’s in the same mold of like a Victor Hedman kind of player. Really good skater, great mobility, defends well, probably could stand to be a little bit meaner, a little more physical with his defending. But he gets pucks up ice, he does everything, everything’s really fluid and calm and under control.”

The Big 10 and Michigan hit the ice before most other amateur leagues in North America this year, which means that NHL scouts flocked to games.

Power has been viewed and scrutinized as much as any prospect, along with his two highly ranked teammates. That can obviously be a distraction, but Power showed no signs of losing focus.

“None of us really talk too much about it,” Power said at the start of the season. “We’ve said things here and there, but it’s not a big part of like what we talk about every day. We all know, the draft is kind of out of control, where we go. So, just focusing every day and trying to get better.”

Reading about what scouts think of Power is one thing, but you really appreciate him by watching him play.

As a defenseman, he possesses all the skills and attributes that you would want out of a top-of-the-rotation guy.

Power contributes offensively but can also defend in his own end. He has size and has learned to use that size and reach to throw off would-be attackers, as seen in this clip.

He can move the puck out of his zone and displays not only great vision in the offensive zone but an accurate passing ability, as seen here where he sets up a goal with a pin-point assist.

Oh, he can also shoot it. Here he gets an assist as his blast from the point was deflected in during the IIHF World Championship.

Will the Kraken select Power with the No. 2 pick?

Seattle picking Owen Power in the draft all depends on what happens with the Sabres. Buffalo very well could pass as they still have a young Dahlin in the fold. Will they want another young, left-handed defenseman? It’s possible Buffalo prefers to pick up a center, such as Matthew Beniers.

If left available, there is a strong likelihood the Kraken will snap up Power with the second pick. Having a defenseman like him is a necessity in today’s NHL, and Francis has looked to the blue line in the draft before. As the general manager with the Carolina Hurricanes, Francis ran four drafts and in three of them, went defense with his top pick.

In 2014 Francis took Haydn Fleury with the seventh overall pick, in 2015 he drafted Noah Hanifin at No. 5, and in 2016 he selected Jake Bean with pick 13. His track record suggests building from the blue line, and he just may get the chance to do so again.

That leaves the question about whether or not Power is ready to jump into the NHL. It’s a tough position to do so at such a young age, but the top picks have done it before.

The tricky part for Seattle is that if they were to draft Power that decision would have to come quick. As a college player, Power is not eligible to participate in the Kraken main camp unless he signs an NHL contract. If he prefers to stay in school, Seattle would have to wait to see him.

He recently touched on the subject, saying that he does lean towards one more season at Michigan.

The draw to return to school is understandable, but would that be a deterrent to Francis in picking him? Power isn’t an automatic to be ready for the NHL in year one and another season playing for a big NCAA program with perhaps a shot at playing in the World Juniors might ultimately help Power and in turn, help Seattle.