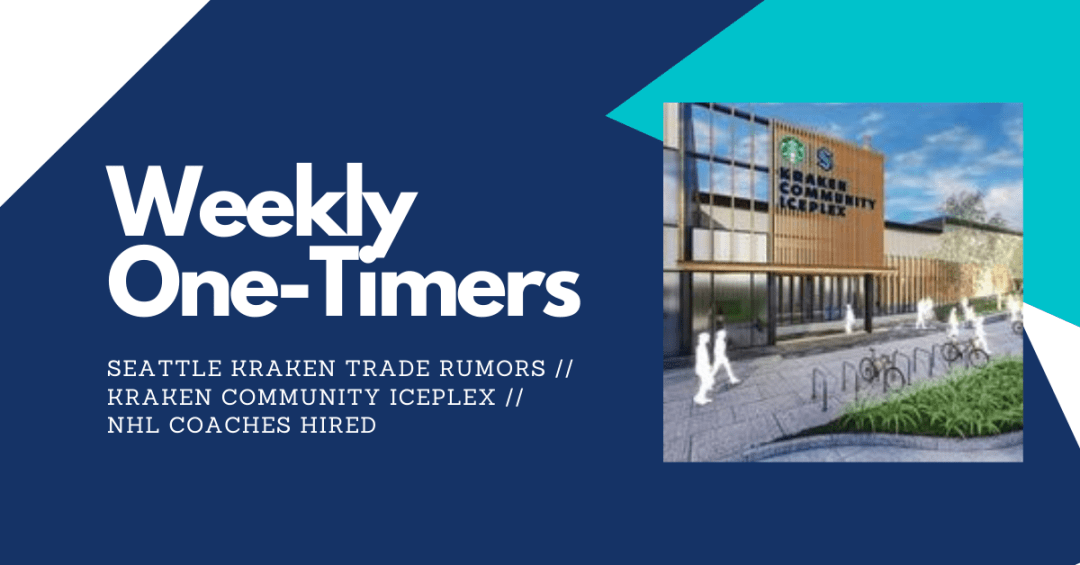 We did it, team! We made it through the 110-degree heat that suffocated our region and had more than 50 percent of us wishing that we had at some point bucked the Emerald City trend of not having air conditioning. If the unparalleled heatwave had arrived last week, at least the Seattle Kraken hiring a head coach in Dave Hakstol and a TV color commentator in JT Brown would have provided a distraction.

Instead, the fiery heat of 1,000 suns torched our region in a relatively quiet week for the Kraken, when all we could do was sweat and daydream about the artificial chill of an ice arena.

The good news is that the peak levels of swass are behind us, 4th of July weekend is upon us, and we are just 19 days away from the Seattle Kraken Expansion Draft. Holy guacamole!

Hey, speaking of ice arenas, the Seattle Kraken training center at Northgate brought to you by hockey (or whatever it was previously being called) officially has a slightly more concise name now!

The team has partnered with Starbucks as its “Community Impact Partner to strengthen the community and advance inclusion and equity in Seattle.” Apparently part of that partnership means renaming the practice facility the Kraken Community Iceplex. It also means that said iceplex will have a Starbucks Community Store as one of its many amenities.

The word “iceplex” does have a pretty good ring to it. It’s like a complex, but it’s centered around ice. It’s an iceplex.

The partnership with Starbucks is interesting too. The coffee giant has tried to demonstrate that it cares about its community, so it’s no surprise that everything mentioned in the team’s press release about the partnership is focused on diversity, equity, and Seattle pride.

UW to play its home games at Kraken Community Iceplex

One other small nugget of Seattle-centric hockey news this week was that the University of Washington’s club hockey team will begin playing its home games at the Kraken Community Iceplex this coming season. The Huskies, who compete in the ACHA, previously played their home games at Olympic View Arena in Mountlake Terrace.

The new arena is much closer to campus and obviously will provide a more modern game-day experience for players and fans alike.

Some Seattle Kraken trade rumors started swirling this week. The first one revolved around Duncan Keith’s status as a Chicago Blackhawk. Elliotte Friedman surmised that a trade could be brewing to send the three-time Stanley Cup winner to “either the Pacific Northwest or western Canada.”

Keith has familial ties to this area of the continent, and reports indicate that the Blackhawks are trying to work with him to find a suitable landing spot. Keith has a full no-movement clause, so he can veto any trade he doesn’t like.

Keith has just two years left at a $5.5 million cap hit, but the real dollars left are quite low at $3.6 million total remaining to be paid. If there’s a sweetener thrown in to get the Kraken to take that cap hit, it makes a ton of sense to throw Keith onto the second pairing on the Kraken blue line. Keith’s kid lives in Canada, though, so north of the border is probably preferable for him.

There have also been unsubstantiated rumors flying around on Twitter that the Kraken are interested in Jake Voracek from the Flyers. Hakstol did coach Voracek, but man, at an $8.25 million annual cap hit through 2023-24, Philadelphia better be giving up its kitchen sink to get Seattle to take that on. Voracek’s production has also waned pretty dramatically in recent years, so I just don’t see it.

Meanwhile, the Nashville Predators have traded one of their core forwards, Viktor Arvidsson, to the Los Angeles Kings for a second-round pick in this year’s draft and a third-round pick next year. On paper it feels like a great deal for the Kings, who are trying to kickstart their rebuild.

Arvidsson, 28, is just two years removed from a 34-goal season, but he has been dealing with a lot of injuries of late that have greatly hampered his production. His addition to the roster means LA will likely have to expose either Blake Lizotte or Lias Andersson in the Seattle Kraken Expansion Draft.

More coaches hired around the NHL

After the Kraken hired Hakstol last week, the Buffalo Sabres and Arizona Coyotes each named their bench bosses for the foreseeable future.

The Sabres have removed the interim tag from Don Granato, who did seem to have a calming influence on that organization, though the team only went 9-16-3 under his watch this season. Still, he’s a well-respected hockey man who has been through the grind of coaching at every level of the sport and survived Hodgkin’s lymphoma, so you can’t help feeling good for the guy.

The Sabres made the announcement in a pretty great way on social media.

Meanwhile, in the desert, the Coyotes went off the board a bit with their hiring of André “Bear” Tourigny as their head coach after parting ways with Rick Tocchet in May. Tourigny spent the last three seasons behind the bench of the Ottawa 67’s in the Ontario Hockey League and also coached Team Canada to silver at the 2021 World Junior Championships.

If you texted Bear to wish him congratulations, it may be a little while before you hear back.

Former players Alex Tanguay and Tuomo Ruutu were also hired as assistant coaches in Detroit and Florida, respectively this week.

The Montreal Canadiens, playing in their first Stanley Cup Final since 1993, asked if they could increase the number of fans allowed into the Bell Centre for the remainder of the series from 3,500 to 10,500. The request was denied by the Quebec Public Health authorities. The decision is a tad ironic, considering thousands of fans are allowed to stand shoulder to shoulder in the streets to watch the games, but that’s neither here nor there.

Jonathan Toews was back in the public eye for the first time this week since the Blackhawks announced at the beginning of the 2020-21 season that he was dealing with a mysterious illness that caused him to sit out for the entirety of the campaign.

I don’t know what chronic immune response syndrome is, but I know I don’t want it.

The big individual NHL Awards were announced this week. If you listen to the Sound Of Hockey Podcast, you will understand when I say that the only award that matters, of course, is the Calder Trophy. Minnesota’s Kirill Kaprizov won the rookie of the year award with 99 first-place votes, the biggest landslide victory since Teemu Selanne in 1992-93. Imagine being the one writer who didn’t vote for Kirill. OK, but seriously, the full list of winners can be found here.

ESPN announced its full lineup of hockey broadcasters and reporters in a video that will surely hype you up. No Gary Thorne, but still, some pretty incredible names in here.