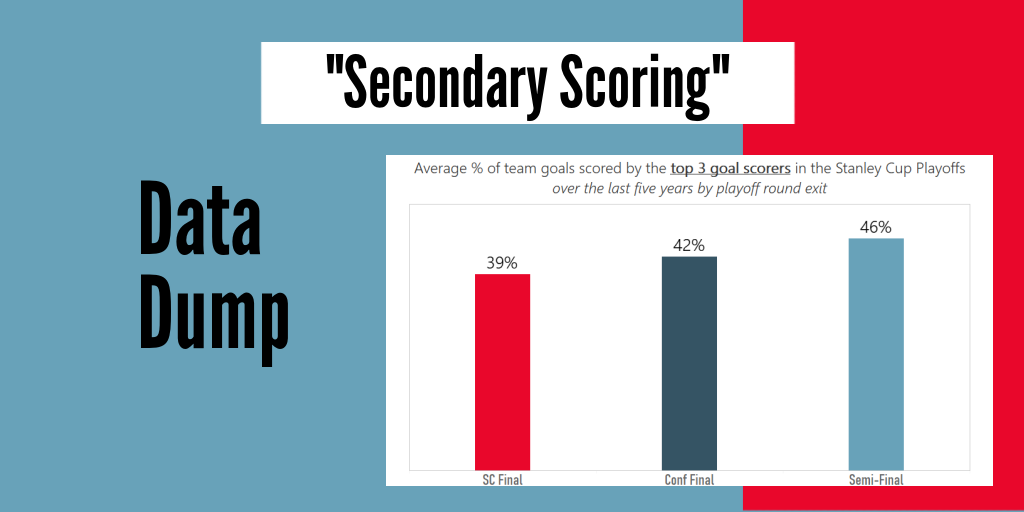 “Secondary scoring” is a term that is thrown around as an essential ingredient to a team’s success in the Stanley Cup Playoffs. I have heard it for years and have largely accepted it. For this week’s Data Dump, I want to dig into the numbers around “secondary scoring” to evaluate if it truly is important or just some playoff lore that we like to talk about.

There is no consensus definition for secondary scoring, but the general thought is that it is the scoring beyond a team’s top line or top goal scorers. Think of it as a distribution of goal scoring.

You do not have to look far in this year’s playoffs to find a good example of “secondary scoring.” For the Tampa Bay Lightning, Tyler Johnson scored two goals in Game 3 and Blake Coleman scored in Game 2 and 3 of the Stanley Cup Final. Neither of these players would be considered a top goal scorer for the Lightning, but it is not totally surprising when they do score.

Secondary scoring by the numbers

Here is a look at the average percentage of goals scored by the top-three goal scorers in the Stanley Cup Playoffs based on the round the team reached in the postseason. Note that I excluded the first-round playoff games since the sample size of games played per team is relatively small.

Here is a look at the team detail over the last four years.

This year, Winnipeg only saw 35% of its scoring coming from their top-three goal scorers and last year, Philadelphia saw 34% of its scoring from its top three, but neither team advanced past the second-round.

It is important to consider context when looking at numbers, particularly for the teams with a small sample size. In Winnipeg’s case, Mark Scheifele, tied for second in scoring in the playoffs for the Jets, was suspended for the last three games against Montreal and therefore did not have an opportunity to score more goals. Had Scheifele played and scored, the percentage of top-three goals would have gone up, while the secondary scoring would have gone down.

Here is a look at the player detail that has made up the top-three scorers by team by year and the percentage of teams’ total goals.

If you look at Vegas this year, Mark Stone, Max Pacioretty, and Jonathan Marchessault accounted for just 30 percent, but if you followed the Montreal-Vegas series, you would realize that those players came up relatively empty in that series with a total of one goal over the six games. The 30 percent is not really an indicator of the secondary scoring but more likely a lack of scoring from the top-three goal scorers.

Except for Tampa Bay in 2020, the Stanley Cup Final teams’ (in red) top-three goal scorers all account for less than the average of 43 percent. What stands out to me is that teams with a much greater dependency on their top-three goal scorers: Boston-2021, Boston-2020, Islanders-2019, and Pittsburgh-2018 all failed to make it past the semi-final round of the playoffs.

The only conclusion I can reasonably come up with based on this quick analysis is that you cannot be overly dependent on your top-three goal scorers and expect playoff success.

How would you approach understanding secondary scoring? Put your thoughts in the comments section or send me a message on twitter.