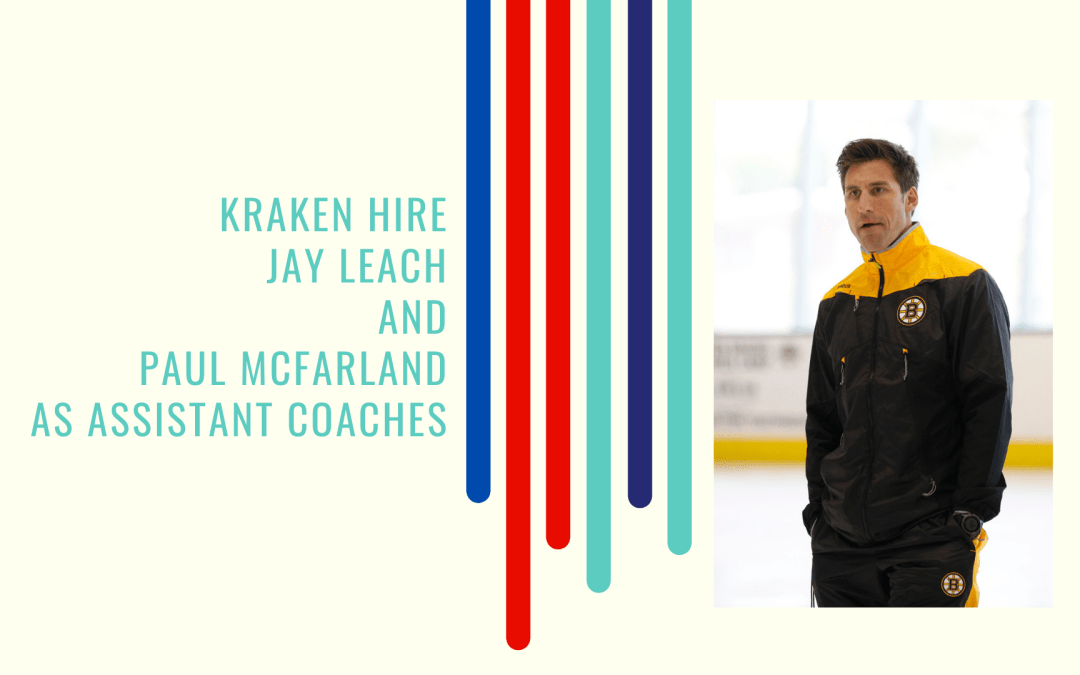 After reports leaked out Monday that the Kraken were hiring Jay Leach as Dave Hakstol’s first assistant coach, the team made the news official on Tuesday. What was omitted from Monday’s reports, though, was that Seattle was actually hiring not one, but two assistants as Paul McFarland joins Leach on Hakstol’s inaugural staff.

Man, even when we think we know something before the team has explicitly stated it, they still find a way to throw a curveball, proving once again that the Kraken are quite good at keeping secrets.

Leach, a 41-year-old native of Syracuse, NY, joins the Kraken after four seasons at the helm of the Providence Bruins, the AHL affiliate for Boston. Leach was successful in Providence, posting a 136-77-16 record and leading the P-Bruins to first-place finishes in the Atlantic Division in each of the last two seasons. They lost in the first round of the playoffs in 2017-18 and 2018-19, and no playoffs were held in 2019-20 or 2020-21 due to the pandemic.

Boston had reportedly considered bringing Leach up to the big squad for next season to replace recently departed Jay Pandolfo as an assistant on Bruce Cassidy’s staff, but Divver states that the opportunity with Seattle was just too good for Leach to pass up.

You have to love Leach’s journey to the NHL, both as a player and as a coach. After four years at Providence College, where he was the captain of the Friars in 2000-01, Leach had to grind in every sense of the word to reach the pinnacle.

Leach got a two-game cup of coffee in the NHL in 2005-06 with Boston, two more games in 2007-08 in Tampa Bay, and later had more robust stretches with New Jersey, Montreal, and San Jose.

Leach began his coaching career in 2014-15 with Adler Mannheim of the Deutsche Eishockey Liga in Germany, where he served as an assistant under Geoff Ward. He then joined Mike Sullivan’s staff in Wilkes-Barre/Scranton the following season, and when Sullivan was promoted to Pittsburgh, Leach assumed the head coaching role with the AHL club on an interim basis. During Leach’s one year with the WSB Penguins, current Seattle Kraken assistant general manager Jason Botterill was running the AHL team as the AGM for Pittsburgh.

The next stop for Leach was back in Providence where he played college hockey and several seasons of his pro career. He joined the P-Bruins as an assistant to Kevin Dean in 2016-17, but after that one year and a dramatic run to the AHL’s Eastern Conference Finals, Dean was promoted to become an assistant with the NHL Bruins. Leach was tabbed as Dean’s replacement as full-time head coach to start the 2017-18 season, where he has remained until now.

“I can’t tell you how excited I am for the opportunity to join the Kraken,” said Leach. “From the ownership group to Ron Francis to Dave Hakstol, it is truly an incredible opportunity to work with them. I’m looking forward to the Expansion Draft, free agency, and training camp as we start to see the team come to fruition.”

This will be Leach’s first time coaching at the NHL level. He will be responsible for overseeing Seattle’s defense.

You don’t have to look too far to find the connection between McFarland and the Kraken, as he served alongside Hakstol as an assistant in Toronto in 2019-20. At just 35 years old, he has quickly risen through the coaching ranks and proven himself every step of the way.

The Richmond Hill, Ontario, native was most recently serving as general manager and head coach of the Kingston Frontenacs of the OHL. Ironically, he did not coach a game on this stint, as the team’s season was canceled due to the pandemic, but he did coach a full season for Kingston in 2016-17 when the Frontenacs went 33-26-9.

McFarland spent two seasons running an outstanding power play for the Florida Panthers before joining the Maple Leafs. He was also an assistant with the Oshawa Generals from 2012 through 2014 and was head coach of Team Canada at the U-18 Hlinka Gretzky Cup in 2017.

It is expected that McFarland will run the Kraken’s forwards and power play.

What makes it even more impressive that McFarland has already reached this level of coaching is that he did not really come close to the NHL as a player, a credit to his abilities behind the bench.

After four seasons in the OHL with the Kitchener Rangers and Windsor Spitfires, McFarland went on to play four seasons of U Sports hockey for Acadia University, where he was the captain of the team from his sophomore season onward.

“I couldn’t be more thrilled to have the opportunity to be part of the Seattle Kraken organization,” said McFarland. “It is truly a once-in-a-lifetime experience and I look forward to working with Dave again, the rest of our staff, and our players.”

Assistant coaches are more good finds for the Kraken

The Kraken continue to uncover diamonds in the rough with every hire they make. Leach and McFarland have great track records as both assistant and head coaches, and they are both regarded as having bright futures at the NHL level.